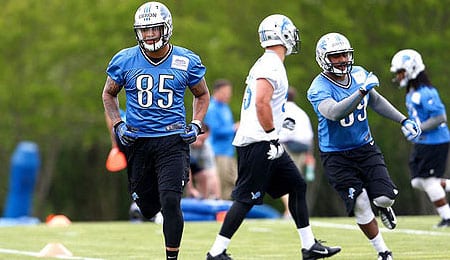 Eric Ebron (85) will own the middle of the field. (Mike Mulholland/MLive.com)

The tight end position in the NFL is evolving into a hybrid with wide receiver. It seems every decade or so a player comes along and casts a mold for future tight ends to follow. Now that Tony Gonzalez is retired, Jimmy Graham is that marquee guy. Graham is athletic like a WR but he is built like TE. Speaking of Gonzalez we are still shocked the Falcons didn’t draft a tight end, so at this point it appears Bear Pascoe and Levine Toilolo are going to carry the weight. This year’s rookie class has some exciting prospects that we think can make an impact, so without further ado, let’s break them down for you.

Eric Ebron, Detroit Lions: Ebron can run the post pattern, the hitch and go, or whatever — just know he will own the middle of the field. Someone will have to catch him before they can attempt to beat him physically. Ebron looks like the real deal and while we aren’t going to recommend him over Graham we think he could be on the cusp of the top five Fantasy tight ends right from the outset. So Ebron is not the best blocker? We’ve seen worse and at the very least the effort is there. Ebron gallops with a deceptive stutter-step and having Calvin Johnson on same field (and to learn from — see video below) should be something special. Ebron should be among the first tight ends off the board, so if you miss out on Graham, leave Rob Gronkowski on the board and go with this kid.

Austin Seferian-Jenkins, Tampa Bay Buccaneers: Seferian-Jenkins is monster who should flatten defenders. As if having a pair of 6’5″-ers in Mike Evans and Vincent Jackson isn’t enough, the 6-foot-7 Seferian-Jenkins will also beef up an immense red zone attack (height-wise, that is). We just suggest you take the wait to see approach here, although you dynasty nuts should definitely remember Seferian-Jenkins in the closing rounds.

Jace Amaro, New York Jets: Amaro might not be as fluid a mover as Ebron, but Jets QB Geno Smith certainly needs a safety valve. Amaro caught a stupid amount of passes in college so you know his hands are top notch. The Jets have brought in some other offensive skill guys to help but we believe Amaro could be the second best Fantasy performer on this team besides veteran WR Eric Decker. We see Amaro as a solid Top 10 Fantasy tight end.

Troy Niklas, Arizona Cardinals: We praised the incumbent Rob Houlser when he finally scored a TD in Week 11 last year. However that was all she wrote and ‘Zona was clearly fed up as it signed journeyman John Carlson and drafted 6’6″, 270-pound powerhouse Niklas. The Cardinal two tight end offense will allow Niklas regular reps as he is a great run blocker and a solid route runner with good hands. He is just plain tough and his grit will transfer well. Niklas may never be a Fantasy stud, but Carson Palmer loves using his a TE and this youngster knows how to do damage in the red zone with his height.

C.J. Fiedorowicz, Houston Texans: Fiedorowicz didn’t destroy the competition in college, but he delivered in times of need. His vacuum-like hands always seemed to cradle the ball just right. Fiedorowicz is not a dominant player like Ebron, but he can be a solid safety valve for any quarterback. As for this season we see Fiedorowicz as a suitable bye week replacement even if he doesn’t light it up early. The old Texan regime used the tight end well, but the new staff might be more exploratory early on before they realize what they have in their third rounder.

Richard Rodgers, Green Bay Packers: His broad shoulders and athleticism should mimic what JerMichael Finley brought to the Packer offense. However, with veteran Andrew Quarless and undrafted rookie Colt Lyerla also in camp, Rodgers will really need to stand out to earn his touches. Rodgers is an aggressive blocker who is never afraid to give up his body. However, he will need to amp up his physicality to finish his blocks in the NFL. Aaron Rodgers has a full slate of weapons in the receiving game so we suggest you take a wait to see approach on Green Bay’s third rounder.

Crockett Gillmore, Baltimore Ravens: Not only do the Ravens have Dennis Pitta, but they also brought in veteran Owen Daniels. So instead of drafting a much needed offensive lineman, they drafted Gillmore. Um, okay. We like Gillmore a lot; he is a deceptive route runner with a nose for the sticks. However, given B-More’s depth at the position, we don’t see him contributing a whole lot this season. We doubt the Ravens will use too many three tight end sets no matter how poor their run game is.

Arthur Lynch, Miami Dolphins: Let us start by saying we love current Dolphin TE Charles Clay. So does the Miami coaching staff. Therefore, Lynch is a clear cut second stringer who will be a blocking TE until Clay is no longer in South Beach. Lynch can catch the ball, but don’t go FAAB crazy if he scores a TD in Week One.

Check out the rest of our rookie positional breakdowns:

Now it’s your turn. Let us know in the comments below which rookie tight ends you’re targeting this year.

Tony Gonzalez remains the brighest star in the mess that is KC. BY ANDY GOLDSTEIN AND DEREK JONES What Went Right Once upon a time in a galaxy far, far away, the Chiefs were 4-3 heading into the bye week. They proceeded to lose their next nine games to finish 4-12. Overall, they lack talent […]