The Wire Troll: Eye on Eyenga 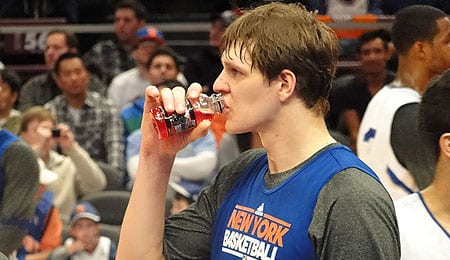 Timofey Mozgov can quench your team’s thirst for rebounds.

Welcome to the Week 17 edition of the Wire Troll, our weekly look at players that may be available on your league waiver wire, but could see a spike in Fantasy value due to a variety of circumstances.

Well, the upcoming week will be a short one — owing to the upcoming Slam Dunk Contest and its companion piece the All-Star Game. The NBA trade deadline is also fast approaching (that would be February 24 for those of you interested in plugging the date into your cool new UltraCyberPhone 3000) and there are sure to be deals wheeled that carry a Fantasy impact. When they happen, of course, the Troll will be there to render his spin.

For now, though, we’ll break down What Is, rather than fret about What Might Be. There is enough news out there to motivate some waiver-wire activity, including the returns/impending returns of Fantasy regulars Mo Williams, Brandon Roy and Joakim Noah.

The Troll will render his All-Star rant next week, but as a precursor, allow me to share with you what I consider the greatest Slam-Dunk Contest performance ever (hint: it doesn’t involve a cape, a blindfold or any props other than incredible athleticism. This guy draws plenty of ire from Fantasy owners these days, but back in double-aught he was flying higher than Paris and Nicole’s hemlines.

Timofey Mozgov, New York Knicks: The big Russian has been largely irrelevant this season, but when he exploded for 23 points and 14 boards back on Jan. 30, the Fantasy world sat up and took notice. He played only 15-plus minutes the following game, though — falling victim to coach Mike D’Antoni’s propensity to go small when his team falls behind. Mozgov is still very much an NBA work in progress, but he has started three straight games, averaging 9.3 points, 8.3 boards and 1.3 blocks during that time. If you’re in a very deep league, Mozgov should provide modest help with big-man stats in the short run, but he carries a great deal of risk to go with his modest upside. Grab him if you think he can help, but keep the bait knife close at hand.

Joakim Noah, Chicago Bulls: Shhh…real quiet-like, slip over to your league wire and see if some mad, impetuous owner gave up on Noah and cast him to the Fantasy winds. Noah is expected back in the lineup shortly after the All-Star break, but he was available in about 10 per cent of Yahoo! leagues as the Troll went to cyber-press. He was averaging 14 points, 11.7 boards and 1.6 blocks when he was shut down by a thumb injury back in mid-December, and he should be back close to 100 per cent in the next few weeks. When healthy, Noah should be owned in every league, so if he’s out there, grab him before someone else does.

Christian Eyenga, Cleveland Cavaliers: It seems like the Troll finds a new Cav to love about every other week, doesn’t it? The train wreck that is the Cleveland franchise finally snapped its record-breaking losing streak Friday, but it’s clear that this is one of the worst NBA teams in recent memory. Team ineptitude notwithstanding, there is some Fantasy gold…okay, silver — copper, you say? fine — to be mined among the flotsam and jetsam drifting around Quicken Loans Arena these days. The latest example is Eyenga, who has averaged 10.5 points, 3.8 boards, 1.5 steals and 1.2 blocked shots thus far in February. Deep league Fantasy owners should have Eyenga on their radars, but heed this word of caution: Mo Williams’s return to the lineup Friday resulted in Eyenga’s court time dropping to below 20 minutes. It might be prudent to give this situation another game before throwing the switch on Eyenga…unless you’re in the direst of straits.

Josh McRoberts, Indiana Pacers: McBob has enjoyed a nice little uptick in Fantasy relevance since interim Head Coach Frank Vogel assumed the helm back on January 31. In six February outings, McRoberts has averaged nearly 26 minutes of floor time, producing 9.7 points, six boards and 2.8 assists per game. Granted, those are not staggering numbers, but all-around lines such as this will find a welcome place at the back of most deeper mixed-league rosters. Vogel seems to favour McRoberts’s traditional style of play at the four, and the youngster looks like he’ll be in the starting five for at least the near future. Note: McRoberts is eligible at centre in Yahoo! Fantasy leagues.

Rudy Fernandez, Portland Trail Blazers: Rudy is on another of his rolls, and when Rudy’s on a roll he belongs on your Fantasy roster. Over his first five games in February, Fernandez was averaging 12.6 points, 3.2 dimes and 1.6 treys. The imminent return of Roy figures to negatively affect Rudy’s stats, but the Troll is far from convinced that Roy will be anything close to his old self. If you’re in need of treys — with a modest side-order of steals and assists — Fernandez is definitely worth a look; just keep a finger on the “drop” button if Roy erodes Rudy’s numbers too drastically.

J.J. Barea, Dallas Mavericks: Barea has provided a dynamic presence off the bench — and occasionally as a starter — this month for the Mavs, averaging 15.7 points, 3.8 assists and 1.8 treys. Dallas is still tinkering with its rotation in its quest to replace the injured Caron Butler, and Barea gives the team a veteran presence and potent outside shot. Peja Stojakovic has struggled in his first three games since returning from injury, and Rodrigue Beaubois is slated to return shortly after the break. Both of these players could snipe some playing time from Barea, but while J.J. is going this well he deserves a look in just about every Fantasy league.