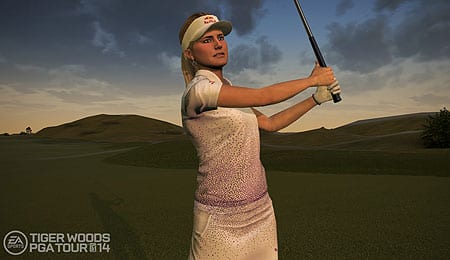 “A little bit of everything” seems to be EA Sports’ motto these days. At this point in the console generation, it’s a bit much to expect giant innovations in gameplay mechanics or graphics. Because of that, EA Sports has gone for the kitchen-sink approach with this year’s iteration of its starting lineup, and Tiger Woods PGA Tour 14 is no different. Historic venues, legendary players, expanded online features — it’s par for the course with EA Sports, but that’s not really a bad thing.

With games like NHL and FIFA, players need to memorize many different combinations for buttons to trigger alternate moves, positions, etc. Not so with Tiger Woods; as in previous games, primary interactions come with the analog stick.

The second change involves the actual swing in the analog stick. The strike meter has been slightly tweaked to be more sensitive — it reacts more to where you hit the ball. The strike cursor now has horizontal options, giving you more control over the strike (or if you’re like me, more opportunities to mess things up). Fortunately, for casual Tiger Woods gamers, leaving it at the default centre takes care of the job most of the time.

This generation’s version of EA Sports’ golf sim doesn’t see a huge graphical or audio leap forward from previous versions. Because golf takes place on a fairly static course, it’s really about the environment and the player animations, and those have essentially been maxed out. That’s not a bad thing — the environments look great, the animations are fluid, and Legends look like their counterparts in their prime. Still, if you’re hoping for a new level of graphical prowess, you’ll probably have to wait until next year’s PS4 version.

While the bar for graphics and sound hasn’t really changed, new elements have been added to it. The game now has dynamic daylight, which can optionally sync to real time at a particular course. Night golf is also available, providing a different context to things. For the majors, TV-style presentations have been ramped up, and there’s a noticeable amount of new camera angles for replays and fly-bys.

As Legends mode is a major part of this year’s release, the graphics get era-specific filters — that’s a nice sepia look for old-school sweaters and socks. It’s certainly not necessary but it’s a very nice touch, and in particular, die-hard golf fanatics will appreciate the unique presentation.

EA Sports’ recent iterations have seen significant leaps forward in online functionality, and Tiger Words PGA Tour 14 is no different. This, of course, only appeals to a certain percentage of gamers that want online interaction, and it’s a little different playing a golf game as opposed to a team sport like hockey or a direct one-on-one game like tennis. Multiplayer is integrated in the way of a twentyfoursome. Connected Tournaments provides real-time shot arcs of 23 other players’ results.

These stem from an expanded Country Clubs mode, as the number jumps from 25 members to a whopping 100 people. Other social features, such as customizable online events, expanded leaderboards, chatting, etc. are there to enhance the online experience.

The other area of improvement — well, “improvement” might be too strong of a word — “expansion” is more appropriate — is in the volume of content. Now you have Legends such as Ben Hogan and Lee Trevino, more courses, more Career Mode options, more genders (LPGA players), and all four major championships. This is all on top of the usual core gameplay, such as quick matches, PGA Tour, and online tournaments.

That’s really the beauty of recent EA Sports games — there’s just so much to do that it’ll take a long time to get through it all, and by then, EA Sports will have another version for you to buy. You can start career mode, then take some time off to watch your friends compete in the Country Club (with pervasive live chat to talk smack), have a quick Night Golf match, then go against some Legends, then join the LPGA, all before resuming your career.

It’s a lot of stuff, and perhaps the only way that it falters is that it’s not a giant leap forward, which will ultimately disappoint some players. For those folks, the more precise swing mechanic may not be enough to justify a purchase — but when you have annual updates, what else can you ask for?

As we mentioned, Tiger Woods PGA Tour 14 isn’t a giant leap forward in core areas, but it adds enough options to satisfy just about every type of golf fan. For those that love the history of the sport, Legends and the Majors bring new depth to the experience. For those that want a more community-oriented experience, the integrated online features are miles ahead of last year’s game. Add that on top of proven core game mechanics and it’s easy to recommend this version as long as you know what you’re getting.