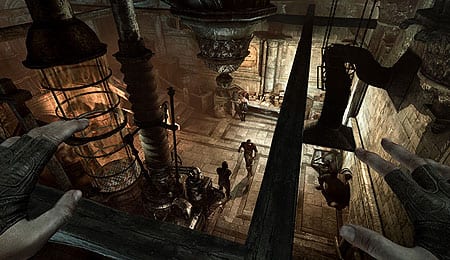 It’s been nearly a decade since the Thief series has seen screens — computer screens, at that. Square Enix’s series reboot comes with a lot of hype on the heels of popular franchises like Assassin’s Creed and Dishonored. While the new Thief does take from those series and others (though really, those franchises borrowed from the original Thief games, so you could just say that Garrett is stealing it back), it also strikes out on its own in terms of rhythm and gameplay.

Thief is more about timing than, say, chain combo-killing. Because of that, your main concerns with controls are movement and quick, swift strikes. Fortunately, there’s nothing here to slow you down, and there’s even a little bit of parkour-style action to get Garrett across the rooftops and alleyways (though not as much as you’d think given that it’s introduced immediately). Traversal up and around objects is smooth… it’s hard to tell whether or not there’s a CPU assist on it, but this is well balanced and you’ll experience minimal cheap fall-to-your-death moments.

As for combat, you’ll want to avoid it most of the time. When you do engage, Thief can be a little sloppy, though it doesn’t necessarily ruin the experience. Hand-to-hand combat is fairly easy to learn, and the general “knock out the guard and hide his body” mechanic works well with command prompts showing up on screen. The prompt calls for the R1 button. However, there are no other options when sneaking in from behind, which seems limiting. You’d think if you hit the attack button, Garrett would do a stealth assassination. Instead, hitting the attack button will do a standard attack or, if you’re not within range, swing at the air and alert the guard.

As this was reviewed on the PS4, certain elements are exclusive to the system. The controller’s lightbar reflects your stealth status. If you’re playing in a bright room, you probably won’t notice this except in your peripheral vision. However, when played in a dark room, this gives a fair bit of ambience. The touchpad is used for menu navigation, though your mileage may vary with it — it seemed a bit loose for us.

Much of Thief takes place in the blue-tinted cityscapes, your only light coming from torches, lamps, and the moon. This is detailed and stylized, though the city lacks any real personality. You’ll find haunting cityscapes and a blend of Victorian/steampunk elements, though things tend to become repetitive after a few chapters. The character models and animation follow suit — detailed and stylized without personality. Because of the mood and genre, it’s hard to not compare it to Dishonored, and I’ll say that the graphics on Thief are technically stronger but without the distinctive style of Dishonored.

Lighting is critical in any AAA release, but for a game spent in the shadows, it’s even more important. Fortunately, Thief provides some of the most realistic lighting to date. One candle, a group or candles, and electronic lamp or a street light are appropriately bright with the correct colour tone and flicker or hum realistically.

It’s important to note that this was reviewed on the PS4. So technical fidelity (excellent textures, strong lighting, minimal screen tear) should be taken in context when compared with the PS3/Xbox 360 versions.

Noise and sound are a big part of Thief, as you’re gonna spend a lot of time in the shadows waiting for clues. Environmentally, these add a lot of nice touches and there is a high level of interaction which affects the world. Objects have true dimensions and physics, and make an appropriate sound of the object when picked up/bumped into/knocked over. For example: if you walk on broken glass it makes a crunchy “walking on glass” sound, which is louder the faster you walk over it and can alert enemies. Same thing walking through water, which makes a very realistic environment — a necessity for a game played out in the shadows.

Patience is the key to Thief, and if you’re not a fan of waiting in the dark, then you’re going to be really frustrated. This isn’t like Metal Gear Solid (in which you can shoot your way out of problems) or Dishonored (in which you can magic your way out of problems); instead, much of Thief requires the player to be slow and methodical, though the amount of looting provides a bit of reward for those that wait.

In other words, if you love to hide and loot, then Thief is for you. Missions tend to be based around breaking in somewhere and finding a specific object, though the game gives you multiple paths to achieve that. Be warned, though — alternative routes don’t necessarily give you much choice, as there are clear easy and difficult paths to take. It may have been more interesting if the balance allowed for several equal routes.

Again, comparisons are inevitable to Dishonored, and while Bethesda’s supernatural stealth title combined hiding with crazy powers, Thief is much more grounded in reality. Garrett has a Focus mode, which allows him to see climbable environments and threats. Depending on how you progress, this can be upgraded to help in combat too. Similarly, Garrett can’t teleport from location to location but he can parkour around environments or look through keyholes to pick up hints and information. It’s not quite Mirror’s Edge but it does make him nimble enough to get around. Upgrades help with this, and Garrett turns out to be fairly customizable one you get into the rhythm of leveling up.

Garrett’s equipment plays a big part of the game. A claw allows you to climb up and around buildings and walls, which is important given that you’ll scaling up to a lot of windows. Arrows can be used for killing enemies, though this game is designed around stealth. Because of that, arrows are used more for affecting the environment — e.g., putting out a candle to dim a hallway. In fact, you’ll find yourself nearly exclusively knocking out guards. This is important to the game, as much of it involves sneaking in through windows to access areas or just loot. This also creates one of the game’s more annoying issues, which stems from a lack of any means to track which windows you’ve already explored or which chests/drawers/etc., you’ve already looted.

While the game’s pacing and balance aren’t necessarily problematic, they can be jarring at times. Much of the first half is a breeze, but you’ll hit a segment in which the difficultly ramps up quickly. Similarly, enemy AI — always a concern in a stealth game — is mostly reliable but has occasional blips that will leave you either scratching your head or cursing the controller.

The through-line to this is a main story that fits into the pseudo-steampunk world of the game, though side quests show more of the game’s dark humour. As a protagonist, Garrett falls more along the lines of the stoic Altair than the brash and cocky Ezio from Assassin’s Creed. He does get some development over the progression of the story, and eventually the layers peel back and he becomes a well-rounded character worth investing in.

As one of the early major releases for the PS4 and Xbox One, Thief is a very solid game that sticks to its genre’s tropes. Some technical quirks and level balance issues prevent it from truly soaring, but if you’ve been looking for a reason to rev up that dormant next-gen console and you like sneaking around, it’s worth stealing some time and investing in Thief.