Posts Tagged ‘The Wolf Among Us’

Video Game Review: The Wolf Among Us, Episode 2 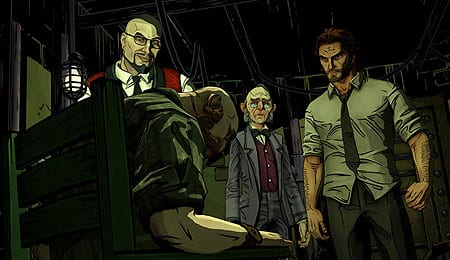 Interrogation tactics make up a big part of Smoke & Mirrors.

Note: The Wolf Among Us series looks, sounds, and plays the same from episode to episode. For an examination of those series characteristics, please see our Episode 1: Faith review. This review will only provide an overall score for Episode 2: Smoke & Mirrors.

In an effort to stay spoiler free, we’ll say this about Smoke & Mirrors — the shocking end of Faith is followed up by another shock within the first 15 minutes or so. The following 60-to-90 minutes colour in a lot of details, ask some questions, and answer a little more (though not too much).

Perhaps that’s the biggest difference between The Wolf Among Us and The Walking Dead. The award-winning latter felt like, for the most part, each episode was its own mini-arc within a bigger one. The two episodes in this series run seamlessly together, making it feel more like immediate pieces to a single linear story. Smoke & Mirrors is the rising action in a traditional storytelling sense, and that may disappoint some fans while others will see it as a mere storytelling element. Regardless, it’s an enjoyable and — in many cases — visceral experience.

The graphics and sound are pulled straight out of the asset archive of the first episode, meaning that you’ve pretty much seen and heard this all before — literally, as environments are recycled from Faith for about half of the 90 minutes or so of gameplay. We encountered a number of technical hiccups, from audio dropping out immediately after a scene loaded to frame rate hiccups, particularly during scenes when characters are in a car. The excellent voice work and strong art style overcome this, and sharp ears will notice that The Walking Dead favourites Lee and Clementine play different voices here (two, actually, for Clementine’s Melissa Hutchinson).

Of course, this is a Telltale game, which means you’re here for the story, which is excellent and we can’t say anything more (save for one over-the-top character reaction at the end which felt more like a plot device than an intelligent, real character). We’ve heard some rumblings that various pundits found it somewhat disappointing after the excellent and shocking first episode. Smoke & Mirrors puts Bigby more in the detective role throughout, and much of the episode involves interrogation tactics. For the most part, the outcome is the same but how you get there — violence? bribery? bait-and-switch? — depends on you and this will have a lingering effect on how certain characters view you.

Quicktime events return in place of action scenes, and once again, a strange technical glitch is present in which it seems like it doesn’t matter which button you press half the time as long as you hit a button. Also, for an adventure title, Smoke & Mirrors lacks any real puzzle solving, at least none that flexes your brain for more than a half second.

As this is a single act in a larger story, we have no problem with the fact that Smoke & Mirrors is more dialog detective work than adventure puzzle solving, or that its length is about 25 per cent shorter than most Telltale episodes. It’s still an engrossing piece of entertainment, one that advances the plot while bringing you into a detailed and vibrant world. With the next episode hitting the midway point of the story, we expect a lot of the setup scenes in Faith and Smoke & Mirrors to start to pay off.