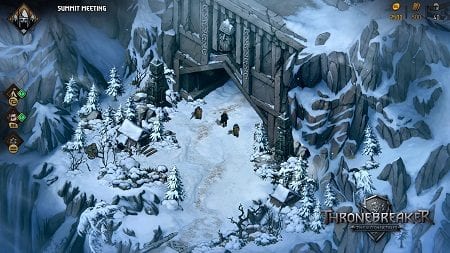 Odds are there won’t be any good choices at the summit.

We’ll admit it. When we first heard there was more Witcher content coming we were excited… and then when that new content turned out to be a one-off of the Gwent card game taking place in the Witcher universe that excitement dulled quite a bit.
However, given the franchise’s ability to tell mature stories, we decided to give it a whirl, and found Thronebreaker: The Witcher Tales to be a more than worthy entry to the series’ lore.

Everything of substance in Thronebreaker is done via turn-based input, whether that’s the card battles or choosing how to handle a specific situation, and as you’d suspect there are no issues there. You do move across the world in an overland map, collecting resources and exploring for extra goodies and optional battles, but no action takes place. While the UI can feel a little cluttered here and there, such as when you’re customizing your deck, nothing here should adversely affect your enjoyment of the game.

There’s nothing special with the graphics. The semi-animated story-driven scenes show nicely drawn character models, and the overworld is colourful and varied, but that’s about as far as it goes. The cards look good for what they are, and there are some effects for certain attacks and damage being dealt.

Where the presentation shines is in the voice acting, which is consistently strong and breathes life into the characters, big and small, as well as the world itself. There’s no black and white or right and wrong here, and the weight of the decisions that ripple through the game are conveyed by the performances. It helps make the story Thronebreaker‘s biggest selling point.

Set shortly before the events seen in The Witcher, Thronebreaker puts you in the boots of Queen Meve of Lyria and Rivea, who is on her way back from a gathering of the leaders of the Northern Realms in the face of rumoured aggression from the Empire of Nilfgaard. She meets an adviser she’d left to guide her son in ruling in her absence to learn that brigands have made off with the kingdom’s gold.

From that point on, you’ll be faced with dozens of decisions for how to proceed, precious few of which offer a clear choice… and even those that might offer a seemingly obvious moral option are weighed against the will of your people, which sometimes hunger for justice even when it’s misguided. These choices range in scope from minor to critical, and the ability to make those decisions helps make an already interesting story even better.

Before long you’ll be deep in the throes of a Nilfgaardian invasion as you travel the countryside trying to beat them back while dealing with limited resources. Despite not being huge fans of card collecting games in general, the story was engaging enough to push us forward hour after hour to see what twist or new horror would be encountered next.

To its credit, Thronebreaker does an admirable job of making card battles varied and interesting even as those hours pile up. If you’re unfamiliar with Gwent, fights are usually contested under basic rules wherein whichever side that has the highest combined card value (or completely wipes out the other) wins — these are typically best of three rounds with a single deck. It’d be folly to try to get into all of the complexities of the system, but suffice to say it’s well designed.

Arguably more interesting are the puzzle battles, which impose specific rules, decks and time limits, challenging you to come up with a specific solution. Whether interesting equates to appealing is likely a matter of taste, however, as these can be very tricky, and if you struggle with one (and don’t want to look up a solution) it can grind progression to a halt. While most of these are optional, they do offer rewards for completing them so it’s in your best interest to take them on.

In addition to the card combat, there are also some light RPG elements involved. As you make your way across the map you’ll find stashes of wood and gold, and you’ll also have the chance to gain (and lose) soldiers, though that has nothing to do with your card deck. This proves to be a pretty linear, largely mundane process where there are limited opportunities, and few reasons, to trod off the beaten path.

Your mobile encampment can be upgraded using the gold and wood you collect, offering up things like passive bonuses and lifting caps on how much you can acquire of an item. You’ll also do some deck building to improve the cards you can bring to the field of battle — outside of the aforementioned puzzle battles, of course. Even as relative neophytes to card games this was pretty straightforward and easy to sort out.

If you enjoyed playing Gwent, then Thronebreaker: The Witcher Tales is something worth picking up immediately. Fans of The Witcher would also do well to take the plunge thanks to its strong story and characters. We found ourselves mostly enjoying the card gameplay, and if you don’t there’s always the option to forego the battles and focus on the story.