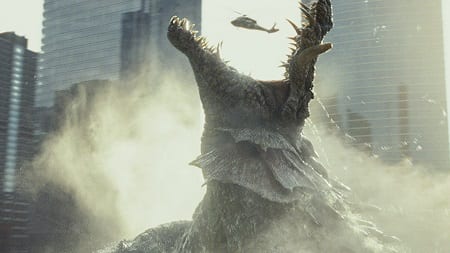 Probably the most important aspect of a successful buddy movie is chemistry, which is something Johnson and Hart display from the onset. There’s a good ebb and flow to their relationship, grounding the film in some semblance of believability even in the face of absurd circumstances.

Although he doesn’t get to flash his charisma here as much as in other films, Johnson remains an amiable lead with the personality and physique to be cast as a hero in a film in which the “villain” is Mother Nature itself. He does plenty of physical action sequences, an array of impressive stunts and still manages to bring a human element to his character.

Despite this being just its third game, The Behemoth already possesses a very distinct (and instantly recognizable) art style, which is on full display here. Characters and levels are simplistic yet teeming with personality and a cheerful colour palette. There’s also plenty of the developer’s signature charm with square pigs to ride and frogs turned time bombs… oh, and poop, too. The story advancing cut scenes are very clever as well, offering up a cool take on the game’s theatrical premise.