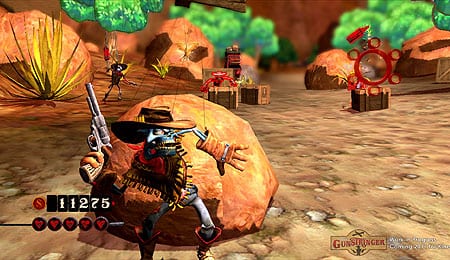 That skeletal puppet deserves his revenge… and they deserve to die.

It’s been nearly a year since Microsoft’s Kinect launched in North America, and in that time we’ve seen no shortage of dance, fitness and mini-game collections hit store shelves. Unfortunately, those that invested based on its potential haven’t seen much of a return outside those genres. Twisted Pixel aims to change that with its release of The Gunstringer, an on-rails shooter that gives Kinect owners a taste of the diversity that’s been sorely lacking.

In The Gunstringer, your left hand controls movement like a puppeteer, sending your undead marionette back and forth by swiping sideways and leaping over objects by throwing your hand up. Your right hand operates the pistol, which can paint up to six targets before firing rounds by snapping your elbow up to simulate a recoil.

When everything works it’s a lot of fun, but the Kinect doesn’t always register one-to-one movement accurately. That can add a level of annoyance to segments when you’re tasked with avoiding objects by moving to a specific section of the screen. It’s particularly tough when trying to subtly adjust. It doesn’t ruin the game by any means; it just creates undo frustration.

It’s also worth noting that while The Gunstringer can be played sitting down, it does a much better job registering your motions when standing.

Despite making the jump from downloadable game to full retail release, The Gunstringer doesn’t represent much visual progression from the Twisted Pixel crew. It still uses its “patented” Beard graphics engine to churn out a bunch of funny-looking characters and environments that give the entire presentation a much appreciated whimsical feel. While visually charming, I did encounter some dips in the frame rate when multiple objects exploded in my path.

There’s not a ton of spoken dialogue, though what’s here is well done. I enjoyed the announcer, who had a perfect “Old West” voice, even if his words didn’t always make sense given what was happening on the screen. The music and sound effects are enjoyable, particularly that silly hobby horse making real horse noises — for whatever reason that consistently cracked me up.

At its core, The Gunstringer‘s tale is a lot like the Quentin Tarantino film Kill Bill, only without all the profanity and severed limbs spouting fountains of blood. You are The Gunstringer, and you’ve returned from beyond the grave to exact revenge on the members of your posse that betrayed you. As you kill them one by one, you “X” out their faces on a photo you carry showing the whole group. Of course, it wouldn’t be a Twisted Pixel game without some sort of farcical humour.

That’s interjected by making the entire game out to be an elaborate live-action play performed in front of a live audience. There are a number of reaction shots of real people “watching the show” spliced in throughout the game to demonstrate various emotions. You’ll also get audience feedback during actual gameplay as they boo and cheer based on your performance. Those reactions combined with the announcer make The Gunstringer a lot of fun from a presentation standpoint.

Although the game is best classified as an on-rails shooter, there’s actually a pretty noticeable effort made toward varying up the gameplay so that it doesn’t get stale. Thus, in addition to the standard running and shooting, you’ll also be avoiding and hurdling objects, engaging in fisticuffs, fleeing from things like boulders and herds of snakes (probably not the right term for a mass gathering of our slithering friends, but oh well…) and cover-based shooting.

As you might suspect with such a diverse bag of tricks, some of them hold up very well while others do not. Falling under the latter category are definitely the sections that require precise movement to avoid things that appear in sections of the screen — think of your TV screen like a tic-tac-toe grid where only one or two openings exist. That’s because, (a) it’s not always clear which sections are occupied; and (b) there’s a slight delay between moving your hand and the on-screen response. As a result I’d often move over one section too many and end up getting smacked.

It should also be pointed out that The Gunstringer is not a long game with a run time on the default difficulty of between three and four hours. That said, like other Twisted Pixel titles, there is a lot of content that can be purchased via earned in-game currency. That includes new modes and a punishing higher difficulty setting as well as the usual assortment of behind-the-scenes videos.

For those still searching for added value, the game comes packed with a code for Fruit Ninja Kinect and a free DLC adventure entitled The Wavy Tube Man Chronicles. The latter title is a completely live action story with some of the hokiest and most ridiculous acting this side of Gymkata, highlighted by hilarious death scenes played out when you “shoot” somebody. I’m sure not everyone will embrace the tenor or pace of the DLC, and I did find the audio to be a bit spotty, but anyone that has enjoyed Twisted Pixel’s comedic efforts over the years should find this right up their alley.

While a bit on the short side and frustrating at times, The Gunstringer still brings a lot to the table with its charming graphics, diverse gameplay and irreverent sense of humour.