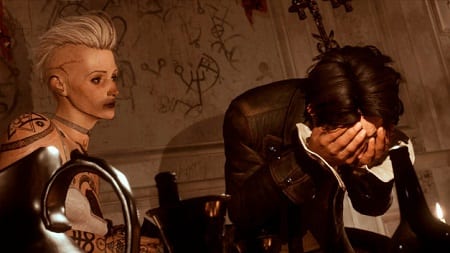 TellTale’s The Walking Dead launched a new genre by combining standard adventure game tropes with Choose Your Own Adventure narrative decisions. Most games in this genre have followed the same formula, with only Life Is Strange adding unique mechanics. The Council seeks to turn the genre on its head by integrating RPG-style classes and leveling into the equation — and for the most part, the first episode, entitled The Made Ones, succeeds.

There’s nothing really groundbreaking about The Council in terms of its controls; what’s much more interesting is how they’re used. It’s the standard “select a response” for most interactions.

From a movement perspective, the camera uses a standard third-person over-the-shoulder view rather than the static cameras found in most TellTale games, and this generally makes it easier to move around and get a sense of what’s happening.

The Council has noticeably superior visuals to the usual episodic narrative releases of the past few years. Comparing The Council‘s environments to, say, TellTale’s standard “living comic book” images or Life is Strange shows a stark contrast in details and realism. The art style is reminiscent of Bethesda’s Dishonored series, though without the fantastical magic-meets-machine element.

Given the time period (late-18th century), this makes sense, and it’s clear a lot of effort went into giving the game a distinct look. However, the people are, um, pretty disarming in their unattractiveness (and one totally disproportionate female character); to put it mildly, one older character looks like his face has melted a la Emperor Palpatine.

Unfortunately, the audio is very hit-or-miss, and there are two reasons for this. The first is simply spotty voice acting in places, particularly for the main character. He’s supposed to be 18th Century French yet he sounds like a modern day American.

Second is that the game is bursting at the seams because of its RPG-meets-narrative gameplay, and thus it forces seemingly out-of-context conversations or discussions given previous gameplay choices.

The Council is being billed as a cross between RPG classes and narrative adventures. How does that work exactly? Early on the in the episode, you’ll get to choose a class for your character, Louis de Richet. This class opens up certain dialogue options, and as the game progresses, you’ll open up additional options as you level up.

The narrative is built around a secret society in America’s early history, including such notable figures as George Washington. As the mystery is uncovered, Louis will interact with both people and the world around him. In some cases, you’ll have dialogue options requiring Focus Points, which can be re-earned by the standard RPG fare of consumables or by identifying an NPC’s weaknesses.

Other items buff abilities as you uncover the skill vulnerabilities of NPCs — use too much of an item and it penalizes you with a debuff. All of this is based on the character class you chose, theoretically creating significant replayability (we’ll see as more episodes are released).

Conversation choices grant experience, which work towards opening up the skill tree. Also, conversation battles, where successful convincing has to take place over multiple rounds, advance the story — regardless of outcome.

If this sounds like a lot of systems and world-building to get through, it certainly is, and it breaks in the middle of the game to level up when you go to bed. From the perspective of a single episode, it seems like nearly every choice comes with a consequence, ranging from whether or not NPCs believe you later on to true narrative branching decisions.

However, TellTale often gives the illusion of this type of influence while ultimately throttling you down a fairly linear path. Through separate playthroughs, it’s clear that you uncover different information based on your class and your choices, but it’s difficult to tell just how this will affect the big picture.

In the first episode alone, there are disjointed moments when the situations and narrative make jumps based on previous decisions, so while the ambition of the game’s model is to be commended, right now it still feels a little rough around the edges.

An innovative entry in the narrative adventure genre, The Council looks to break new ground by granting more player agency over the experience via RPG mechanics. The result is filled with potential but offers a number of technical hiccups along the way.

At this stage, though, it feels like it would have worked better as a single large game like Until Dawn because of the sheer density of mechanics, world and characters to learn.