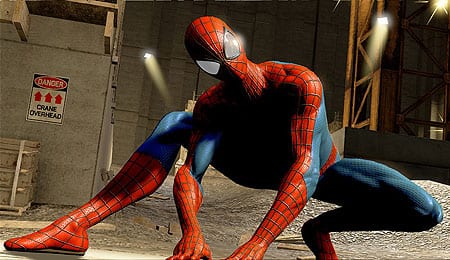 The fu*k you lookin’ at?

With The Amazing Spider-Man 2 hitting theaters, it should come as no surprise that a game adaptation has been cooked up for a nearly simultaneous release. Once again Activision has turned to developer Beenox, which helmed previous titles like Shattered Dimensions (very good), Edge of Time (meh) and Amazing (pretty fun), to bring Spider-Man to home consoles. We’ll spare you a lame “with great power comes great responsibility” joke and swing right into the review.

There haven’t been many changes from the previous Amazing title, and that’s just fine since the game handled quite well. The Arkham-inspired combat returns, allowing you to fend off multiple thugs at once with the ease befitting a superhero. Swinging through the city has been altered slightly with the left and right triggers now corresponding to which wrist your web shoots out of. It doesn’t feel more or less responsive, just different.

Like its predecessor, this game also falls victim to a lack of subtlety. Spider-Man often seems glued to surfaces at inopportune times, like when you want to drop down behind an unsuspecting enemy and take him out with a tap of the left bumper. The result is a character whose movement feels graceful and effortless in wide open spaces, but awkward and choppy in close.

Running on the PlayStation 4, The Amazing Spider-Man 2 maintains a consistent frame rate throughout but takes on the appearance of a souped-up PS3 title — by that I mean it looks cleaner and smoother than a last-gen game without being close to on par with games that were built for the system like inFAMOUS: Second Son or Shadow Fall. Small disappointments like limited combat animation sets and clipping through objects don’t crop up enough to affect the game.

What can affect your enjoyment is the camera, which routinely spins you around in disorienting fashion during both combat and exploration. Even when compared to the recent Vita re-release of the first game, Amazing 2 really feels like a step in the wrong direction.

Voice acting is pretty good during cut scenes and story-driven exchanges. It becomes incredibly repetitious during exploration, however, as both Spider-Man and the disposal villains will repeat lines far too frequently. We lost count of how many times we heard Spidey derisively say “I almost died… of boredom,” after throttling some lesser criminals. The music and sound effects are solid.

If you haven’t seen the second film and are worried the game will spoil it, don’t be. This version of The Amazing Spider-Man 2 represents an alternate story that builds on elements from the first game. The broad strokes are that criminals in New York are running scared because of the “Carnage Killer,” who is targeting and eliminating them. To help the overburdened police, Harry Osborn and Wilson Fisk privately fund a task force, though their true motives might not be so noble.

Under different circumstances the story could be considered something of a mystery as you unravel the roles of secondary players like Kraven the Hunter and find out who’s really pulling the strings. Since it all takes place in the Marvel universe, however, odds are you already know who everyone is or turns out to be from the get go, which means there are no surprises. Still, it’s a decent enough tale that does well to capture the general vibe of Spider-Man.

Not a lot has changed on the gameplay front since the last one. You still split your time between main missions, heroic deeds and swinging through New York looking for collectibles. Perhaps the most notable addition is the hero/menace meter that has been introduced. Now, if you’re wondering if Spidey can actually do bad things the answer is no. Your menace meter builds by simply ignoring people in need, which unfortunately becomes sort of annoying the longer you play.

That’s because your map’s spider sense is constantly tingling, demanding your attention from an array of activities: standoffs, car chases, fires, bomb scares, petty crimes and people in trouble. It’s unusual to look at your map and not see several issues happening at once, all over the city, and if you’d rather pursue the main story or search for goodies you’ll run afoul of the task force in short order.

Their presence is little more than an annoyance, but it just feels silly to rescue a half-dozen people from a burning building, take down a group of gun-wielding thugs and dispose of a bomb only to be considered a menace five minutes later. Making matters worse, the rewards for completing these heroic deeds aren’t all that compelling unless you want to level up all the different suits you collect.

Without those side missions and treasure hunts, the game’s run time is pretty short, and therein lies the dilemma. You can do a lot of stuff in The Amazing Spider-Man 2, but it’s a lot of the same stuff. Even some of the later, climactic storyline missions employ tweaked versions of the heroic deed mini games you’ve done dozens of times. So, while we never hated what we were doing, there’s simply no imagination shown or chances taken. The game plays it safe from start to finish.

Casually enjoyable and yet utterly dispensable, The Amazing Spider-Man 2 never strives to be more than a paint-by-numbers sequel. If you liked the first one you’ll find more of the same here, but even then we’d suggest either renting it or waiting until the inevitable price drop to get your fix.