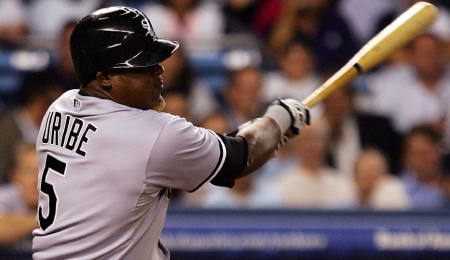 Juan Uribe’s absence is being met with apathy from his manager. (Baseball Savant – MLB.com)

In today’s Fantasy baseball notes, we cover some tension on the Pale Hose and Randy Johnson‘s rebound effort.

So we’ll need to see more to believe he’s out of his slump. Apparently, the problems have resulted because he’s been tipping his pitches. We wouldn’t want to risk it against a hungry Yankee squad and showing-no-signs-of-cracking Detroit team this week. That’s a tall order for Buehrle even if he were on his game, which he clearly hasn’t been in the last month (0-5, 11.48 in July).