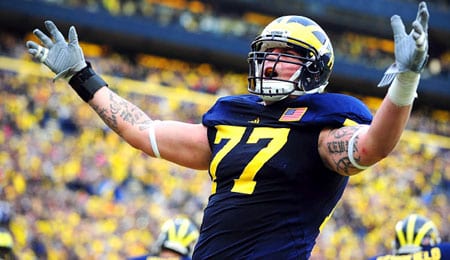 Taylor Lewan, Michigan Wolverines: Entering the Combine, Lewan was already considered a top five OT and probably a first round worthy player. Then, he tested towards the top in all Combine events (including a 4.85 40-time, which you can see in the video below). We were wowed by the constant balance he displayed in his hips and thighs. He also appears extremely cut for someone north of 300 pounds. We currently have him slated to go the Pittsburgh Steelers with the 15th overall pick and that could be being too conservative as Lewan could go even earlier.

Colt Lyerla, Oregon Ducks: Legal troubles limited Lyerla’s production and ultimately hurt his draft stock. He showed in the top three of the 40-yard dash, the broad jump and the vertical for tight ends. However, Lyerla had the worst showing in the bench press of any tight end and that is concerning. Otherwise, he displayed great energy and poise. If Lyerla had a clean record he would have certainly vaulted himself into rounds three to five but with cocaine possession on his profile we feel rounds six or seven is the appropriate level of risk.

Martavis Bryant, Clemson Tigers: Entering the Combine, we already viewed Bryant as an end of the second round kind of player. He doesn’t get a lot of press because his teammate Sammy Watkins is largely considered the best receiver in the draft. Scouts have been talking about Bryant because his height (6’4″) is so very enticing. Then he exploded for a 4.34 40-time and the chatter started to rise. The voices dimmed slightly as he dropped a pass or two. As we see it Bryant’s performance certainly puts him in the early second round discussion. We would move him above 6-foot-5 Kelvin Benjamin (Florida St.) in terms of pure athleticism.

Derek Carr, Fresno State Bulldogs: On paper, Carr appears to be a traditional three-step drop and slinger. Not much has been said about his speed, but his footwork has been very effective so far. Many experts downgraded Carr after his bowl loss to USC. The Trojans swarmed him from the edge and questions of his competition rose. To that we say an NFL offensive line will take care of Carr much better. On Sunday at the Combine he turned some heads with a 4.69 40-time. So this is a pure passer with great speed and an accurate cannon for an arm. We think the Minnesota Vikings would be bonkers to pass on him with the eighth overall pick.

Charles Sims, West Virginia Mountaineers: Sims is a medium-sized running back that — unlike most backs at the Combine — has the hands to be a three-down back in the NFL. His blazing 4.48 40-time was merely pepper added to this already salty prospect. Sims was already on our radar after a solid Senior Bowl performance. He possess great power in his mid-section and at 214 pounds he has the ability to gain an extra yard as he is being tackled. We had him going to the Texans with the first pick in the fourth round, but we can now see him as the first running back off the board in the early second round.

Aaron Donald, Pittsburgh Panthers: Defensive tackle is position in the NFL known for 330 pound run-stopping monsters. Then there is riser Aaron Donald. He is a svelte 285 pounds with moves as fluid as a tight end. Our friend Mike Noto first introduced us to Donald on our January 1 Podcast. Given his sleekness, Donald should be versatile enough to play all the defensive line positions (a la Howie Long). Donald’s 4.65 40-time forced scouts to nervously jot on clipboards. Chances are he has taken a major step forward from our end of the second round projection.

Jordan Tripp, Montana Grizzlies: People have been raving about this small school kid and we have been in that choir. We watched his strong performance at the Senior Bowl and the rumble got louder. We all knew Tripp’s presence at the Combine was the perfect opportunity and all he did was flash a 4.67 40-time, a 37.5-inch vertical, a 120-inch broad jump and 6.89 3-cone time. He was already a third or fourth rounder before this display. Now we feel Tripp should be lock to go in round two. If he lasts until the third round one team will be super happy and the others will be envious.

Other Risers based on the 2014 Combine include:

Now it’s your turn. Let us know in the comments below who caught your eye at this year’s Combine.