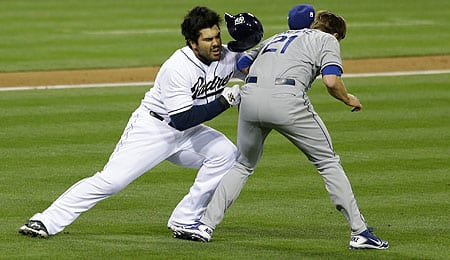 Carlos Quentin (left) loves the DL so much, he invited Zack Greinke to join him there. (Lenny Ignelzi/AP)

The San Diego Padres had the honour of opening up the North American portion of the 2014 MLB season, earning a 3-1 home win over the Los Angeles Dodgers on Sunday Night Baseball.

Today we’re going to check in on a few Padre storylines we’re watching in the early going.

Two weeks ago, Carlos Quentin injured his knee while diving for a ball. Now, we know the idea of Quentin missing any action is hard to fathom, but lo and behold, he was not only forced to open the season on the DL, but is expected to remain there well beyond the earliest activation date (April 9).

We ranked Quentin among the top 80 outfielders in our recently released Outfield Rankings, but are now wondering if we were too generous. If he does return in mid-April, that won’t be too bad, but there’s no getting around the fact that he has never played more than 131 games in any of his eight seasons, and since achieving that lofty career high in 2010, he has failed to even play 120 games in any of the three subsequent seasons. Assuming he doesn’t have a setback, we’d recommend preemptively scooping Quentin off the wire in about a week or so — you know he can produce when he’s active.

On the plus side (if you’re a Dodger fan), at least Quentin won’t be around to injure starter Zack Greinke (see video below) Tuesday when the teams resume their series.

With Quentin out, the rest of the Padre outfield picked him up, with Seth Smith leading off the eighth inning with a major blast to tie the game at 1-1 and Chris Denorfia delivering a two-run single later in the frame to put the Padres up and provide the margin of victory.

Beyond Quentin, the Padres have more than their share of injuries to start the season, which makes those dark horse predictions a bit tough to swallow. There’s no doubt that even with their modest US$89 million payroll, the Padres have a chance to flirt with .500 or perhaps even surprise with 85 or so wins this season, but should they fall into a hole early, it’s going to be too difficult to sneak up on anyone.

Outfielder Cameron Maybin remains out with a biceps injury, although he may return at some point this month. However, the bulk of San Diego’s health concerns once again reside within the rotation, with Joe Wieland, Casey Kelly, Josh Johnson and Cory Luebke all our for extended periods. Johnson is the best bet to return in time to help this team, possibly back in six weeks, but promising youngsters Kelly and Wieland are likely to miss most, if not all of the first half. Luebke won’t be seen again until next year at the earliest.

One of the keys to the Padres’ fortunes this season will be Chase Headley’s ability to return to his 2012 form. Obviously, he’ll need to stay healthy this year to even have a shot, but last year was just such a huge step back offensively it’s hard to envision him getting all the way back. Do more of his home runs turn into doubles this year? That’s what we’ll be watching.

Now it’s your turn. Let us know in the comments below what storylines in San Diego you are currently following.