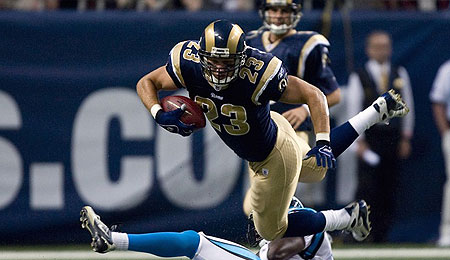 Brian Leonard gets a chance to show what he can do with Steven Jackson sidelined. (Photo by Dilip Vishwanat/Getty Images)

Well, as everyone knows, Week Three of the NFL was a brutal one for Fantasy owners with some players leaving them wondering if the season is just lost. Well, fear no more, James is here to help guide you through the murky thing we call the Waiver Wire.

Brian Leonard: If this guy is still available you need to get him right now. Steven Jackson is out two-to-three weeks and Leonard will get the bulk of the carries in his absence. Not that the Rams’ offense has been clicking or anything, but the rookie has his chance to show what he is made of and you can bet he knows this too. I like Leonard against the Cowboys’ and Cardinals’ defenses this week and next. Plus Marc Bulger is playing with two broken riblets. I’d start Leonard at RB2 or use him in a flex slot if you have a W/R option in your league.

Ron Dayne: Now here is a guy that I am hating to love. Since both Duce McAllister and Jackson are down, the Ahman Green backup may get overlooked in favor of Leonard and Aaron Stecker. The great thing about Dayne is that Green’s knees are banged up and causing him to miss time in Week Four, so Dayne will be a fantasy factor the rest of this season as knees never get better as the season wears on. Dayne is more of a short-yardage/goal-line back, but since Green is hurt, I like Dayne as a flex/RB3 against the Dolphins. If you missed Leonard, go get Dayne.

Roddy White: Now, I hate picking up an Atlanta WR, even if Michael Vick isn’t the QB anymore. But, White seems to have himself a buddy in Joey Harrington as the two have hooked up for 15 catches and 237 yards (seven receptions and 127 yards coming last week). If Harrington can hold off Byron Leftwich, then White has a shot to matter in fantasy leagues. Even if Lefty does take over, I think he will do well in Atlanta’s offensive system and White could still prosper. White is worth taking and putting on the bench for now.

If you are looking for who to take at QB, your guess is as good as mine. Bulger and Jake Delhomme are ailing, and all you see on the wire are guys like Dante Culpepper and Rex Grossman. Well, if you need someone to start this weekend at QB, give Culpepper a shot. He may not wow you, but he shouldn’t kill you either.