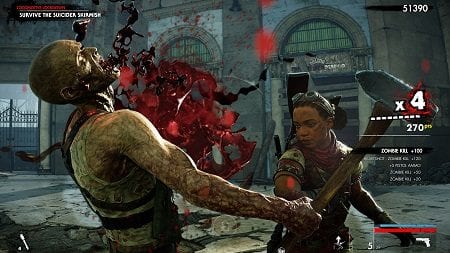 Initially conceived as DLC for veteran developer Rebellion’s Sniper Elite series, Zombie Army got its first standalone release back in 2015 when Trilogy bundled together the first two add-ons with all-new content. Now, we’re getting a more fully formed experience with Zombie Army 4: Dead War, a third-person shooter that looks to tap into the gamers’ seemingly insatiable appetite for killing Nazi zombies.

If you’ve ever played the Sniper Elite series you should feel right at home with the basics of aiming, cycling through weapons and so on. We’d always found the sniping elements to be a clear highlight of that series relative to the shaky close-range gunplay, and while some of that awkwardness remains it feels crisper and more viable — likely due in large to the fact that most zombies use melee attacks so you rarely have to account for cover from projectiles while aiming.

Visually, Zombie Army 4 looks dated, especially for a third-person shooter where pixels don’t need to hold up to the same level of scrutiny as a first-person title. While you’d never confuse the game for an open world, there always seems to be some alternate pathway or abandoned building to explore, even if the rewards are rarely significant. Most of the zombie archetypes are represented here, ranging from basic bullet fodder to explosive-laden suicide bombers, poison-belching shamblers and so on.