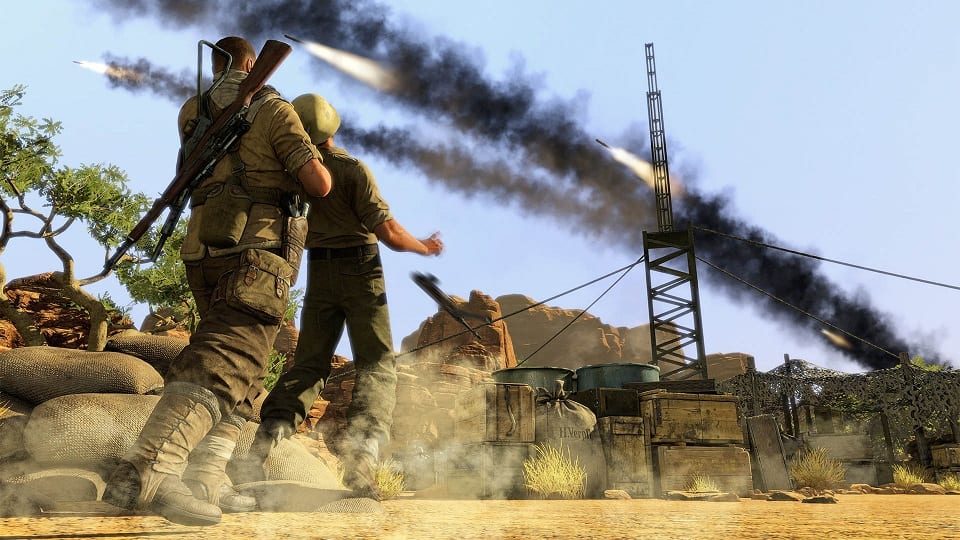 When we think back to our time with 505 Games’ Sniper Elite v2, we remember a fairly fun game with a really cool gimmick and some notable technical shortcomings. Fast-forward nearly two years and Rebellion is back with Sniper Elite III, a game that gets the graphical boost of moving to the PlayStation 4 and Xbox One and also transporting the action from war torn Germany to Africa. And with that piece of business out of the way, let’s hunt some Nazis.

Like its predecessor, action in Sniper Elite III is based heavily on stealth and/or killing from long range. As such, the traditional “run and gun” elements remain on the clunky side, which makes sense from a gameplay perspective — even if it’s weird to think that a trained marksman would be such a poor shot with an assault rifle. Despite that, things feel a little tighter all the way around with how your character handles, both in terms of movement and combat.

Arguably the biggest difference between this game and the last one is the switch to much larger, more open levels. Beyond the changes to how you approach gameplay, the desert location and daylight settings also allow for nice lighting effects. The kill cam has been amped up as well, showing bullets penetrate all sorts of internal organs, including some nasty testicle shots. It’s just one of those things you can’t help but react to — the shooter equivalent of a guilty pleasure.

While Sniper Elite III undoubtedly feels more polished than its predecessor, it still gets bogged down with technical issues like rampant screen tearing, bizarre stuttering animations and enemies clipping through objects. Add some slow loading textures and occasional moments of general weirdness (like falling through the level itself) and it chips away at the initially shiny exterior.

That there isn’t a lot of substance to the audio side shouldn’t come as much of a surprise since stealth is a central mechanic, and enemies can hear and react to you. Karl Fairburne isn’t much of a protagonist, coming off as a guy who’s there to get the job done and not much else. His limited dialogue is delivered with sleep-inducing intensity.

Chronologically, the events of Sniper Elite III actually take place several years before the ones seen in V2, though they once again centre on Fairburne. This time you’re sent to Africa to assassinate General Vahlen and put a stop to whatever top secret project he has undertaken in the desert. What follows is an eight-mission campaign with precious little depth to the story, even by shooter standards.

Of course, that’s not the series’ draw. Instead, it’s all about being put in the boots of a bona fide sniper that can drop enemies all over the map at a moment’s notice. To that end, the game largely succeeds as there were very few moments when we felt smart planning and patience wouldn’t allow us to keep the upper hand on our enemies. Unfortunately, it’s a task made easier than it should be thanks to some very inconsistent A.I.

One moment, patrolling grunts will scarcely be aware of you as you walk a few feet away. Other times an entire garrison suddenly goes on high alert because one person spotted you (even though you killed them before they could raise an alarm). It’s a frustrating aspect of the game that’s only mitigated by the ability to save as often as you’d like, thus minimizing the sting from the arbitrary troop behavior.

When Sniper Elite III gets it right, though, it’s legitimately a blast to play. Those moments when you quickly cap a couple of sentries under the audio cover of an airplane passing overhead. Or when you leave a bundle of dynamite on the road and snipe it from a distance just as a tank rolls up to it. It’s rare for a shooter to afford you the type of freedom this one does, and it helps make this the strongest entrant in the series to date.

Each of the eight missions contains plenty of secondary activities, the most significant of which are the optional objectives. These vary from killing a target a specific way to collecting blueprints or destroying strategic enemy assets. If you set out to accomplish those while also locating all the various collectables (war diaries, cards and sniper nest locations) you can extend the experience significantly — it took around 11 hours to achieve 100 per cent completion.

There’s quite a bit of co-op content here, too. You can play through the entire campaign with a second player, tackle the wave-based survival mode or test your teamwork with Overwatch, in which one of you spots targets with the binoculars while the other handles squeezing the trigger. It’s not a game to buy for its co-op exploits, but there’s definite value added.

Competitive multiplayer is also on the docket with larger maps designed around moving between cover and dropping your opponents from long range. In fact, some modes restrict your movement so that sniping is your only viable option. The online population has been decent thus far, but there’s not enough variety or content for it to run with the big boys in that department.

If you ran down a full checklist of Sniper Elite III’s issues, it wouldn’t be a small one with its continued technical woes and shaky A.I. ranking at the top. Still, the actual gameplay is fun, pure and simple. If you’re intrigued by a more open-ended, long-range shooter, it’s worth getting.