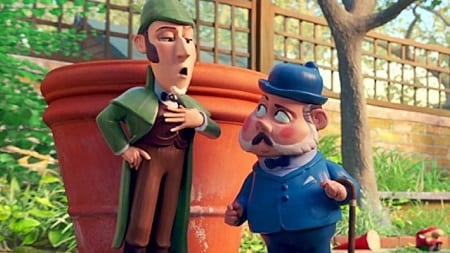 ​​When Gnomeo & Juliet proved to be a sleeper hit you knew it was only a matter of time before a sequel made its way to theatres. It took seven years and migrated studios (from Disney to Paramount), but Sherlock Gnomes finally arrived earlier this year, reuniting stars James McAvoy and Emily Blunt, and adding Johnny Depp to the mix.

After a brief scene establishing the rivalry between Sherlock Gnomes (Depp) and a pie mascot gone bad named Moriarty, in which the latter appears to be broken, the story picks up with Gnomeo (McAvoy) and Juliet (Blunt) moving to London. Placed in charge of the new garden, the pair start to disagree and squabble amid the stress of responsibility.

Looking to make a romantic gesture, Gnomeo breaks into a flower shop and is almost caught in the process, forcing Juliet to make the save. In their absence, the rest of the gnomes and other garden critters vanish. As it turns out it’s the latest in a string of gnome-related disappearances, drawing out the investigative team of Sherlock and Watson (Chiwetel Ejiofor; 12 Years a Slave).

Despite some initial hesitation, the four of them begin working together to track down the missing gnomes. The trek will take them all over London, checking in at some famous points of interest and leading them to encounter all different manner of objects come to life. While the clues seem to suggest the return of Moriarty, could there be someone else pulling the strings?

A lot of the peripheral characters and set pieces are fun. The little bunnies from the garden and the entire scene in the Asian market stand out as the film’s most enjoyable moments. They’re irreverent and silly in a way kids movies should be. Some of the other set pieces are interesting and clever as well, but nothing else measures up to the Asian market.

Sherlock Gnomes is well animated with a visually interesting mix of characters set against an array of London locations. The pace is pretty steady, pushing you forward and keeping the stakes suitably high while still maintaining enough goofiness that it never gets too dark.

At a time when so many “children’s” films offer up new ideas or at least fresh takes on old ones, Sherlock Gnomes feels like a pre-Pixar effort. It’s easy to imagine the entire thing was spawned during a meeting in which someone pointed out that Holmes and Gnomes rhyme and then they worked backwards from there, shoehorning the Gnomeo and Juliet characters in a mystery in which they could employ the Sherlock cliches.

It’s not that it’s necessarily bad (even though we’re listing it under a header that suggests otherwise), it’s more that the whole thing feels empty and forgettable. The voice acting is fine, but we’d be hard pressed to recall a single conversation or dynamic moment from any of the four primary characters. It’s better than the straight-to-DVD Disney sequels of yesteryear, but that’s still the comparison that sprung to mind.

There’s 30-plus minutes of extras with most of it being standard fare. There’s a plot recap with the actors, a look at the design, discussion of the music and so on. A series of four “how to draw” featurettes focused on different characters is interesting if you have any taste for sketching but otherwise it’s a pretty bland offering.

While not a bad movie, Sherlock Gnomesdoes nothing unexpected and isn’t likely to land in the heavy rotation for most kids or parents.