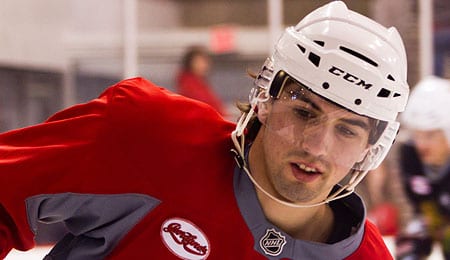 Nick Leddy has been blazing a trail to greatness for the Hawks and his Fantasy owners.

Sometimes the world has to become a simpler place and that goes for the Fantasy hockey world as well. After American Thanksgiving, there is an undeniable feeling of realization for owners. Some will be extremely happy with their team and some will be disgusted. What about the ones in the middle? Why do we never talk about the ones in the middle? Today is for you. If you are sitting on the bubble in the early portion of your leagues, then it is time to seriously pay attention.

When you’re not near the top or near the bottom, the waiver wire is a very worthwhile ally in your quest. If you do not believe me, you may be doomed to find out the hard way. Yes it is cold, pragmatic advice perhaps, but vigilantly paying attention to what others are doing as far as transactions is important.

Keep all cylinders all on high. It sounds like something a crazy person would say, but in Fantasy hockey it is really true. Being highly alert and highly functional is the only way to avoid falling too fast when you’re near the bubble. No one wants the bubble to burst this early but it can when you’re not careful.

Sometimes at The Wire Troll we just have to punch people in the mouth to take notice or hip check them straight into the boards. December is coming so get ready to take control. Here are just a few suggestions of players you may want to add before others get on the roll and beat you to the punch. No GM ever wants that, do they?

This season we are trying to focus only on candidates that are below a 30% ownership rate. Here is this week’s twist: Because we’re technically still celebrating U.S. Thanksgiving, we’re going to give thanks to three players who have been serious waiver wire darlings for the first quarter of the NHL schedule.

Nick Leddy, D, Chicago Blackhawks: Well, Leddy was one of those players we touted very early as a young gun looking to make a splash. In Week Two, he was available only in a small percentage of leagues when we made the trigger quick decision to put him on our lists. Sure enough Leddyhas not disappointed. His ice time has risen to over 20:00 per night and his special teams time has increased each week also. What has he done since? Sixteen points in 23 games along with a +3 is enough to convince us that Leddy (who is not old enough to drink) was definitely one that Minnesota let get away. Do not make the same mistake, ladies and gentlemen.

Sheldon Souray, D, Dallas Stars: Now, Souray has come down a bit in the last couple weeks but his play has still been solid for the most part. He was another one of those 2-to-4 per cent owned pickups that no one ever thinks will pan out at the start of the season. Then people forgot that he would be on the No. 1 defensive pairing and in Dallas that means the No. 1 offensive line which is not a bad thing. So far, Souray has been quite healthy and is an astounding +11. Add the 13 points in 22 games and again you have cheap production from the deepest, darkest corner of defensemen. That alone has to make you feel very good if you were astute enough to jump on this train early.

Brian Elliott, G, St. Louis Blues: There is an old song called “Saint Louis Blues.” The drumline in that song has this slow start, but before you know it there is this double boom. This season, Elliott has been the double boom for both his own Fantasy owners and those who own Jaroslav Halak. Before the start of the season, Elliott rededicated himself and the hint of better things was very evident in training camp when he outplayed Halak. Yet St. Louis went with the incumbent starter and disaster resulted with Coach Davis Payne getting the axe. All Elliott has done is win nine out of 10 decisions with a 1.34 GAA and a .951 save percentage. Toss in the three shutouts and the fact he was owned by 0.5 per cent of Fantasy owners in Week Two and we rest our case. Even RotoRob was spotted touting Elliott on Saturday night.

That does it for this week and next week we reveal three or maybe four of our dangerous picks to hit the wire before anyone else hopefully notices. As always you can follow us via Twitter and good luck out there.

Sheldon Souray, centre, will have to fight to put up the same kind of totals for the Oilers as he did in Montreal. (AP Photo/The Canadian Press/Jeff McIntosh) For players playing in category-based rotisserie leagues, drafting players takes on a whole new dimension. It’s not just the cumulative total of all your points anymore; suddenly, […]