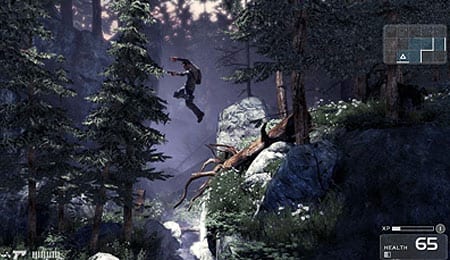 One glance at these graphics should leave little doubt that Shadow Complex is the new standard bearer on XBLA.

Viewed by some as a “spiritual successor” to classic side-scrolling adventures like Super Metroid and Castlevania: Symphony of the Night, Shadow Complex does a marvelous job of resurrecting a largely forgotten genre and reintroducing it to the modern gaming world. The results are spectacular and playing it represented a total breath of fresh air amid a seemingly endless stream of indistinguishable shooters and music games.

Despite much of the game being built around acquiring a lot of different items and upgrading existing equipment, the controls in Shadow Complex never feel, well, complex (see what I did there?). Holding down X makes you sprint, Y reloads your weapon and B is an all-purpose action button that does everything from downloading maps to triggering some sweet melee attacks.

The A button controls your jumping — tap it once for a basic leap, hold it down to jump higher and push it twice to pull off a double jump — which is this game’s bread and butter. The left bumper toggles your flashlight off and on, though you’ll usually want it on, while the left trigger causes you to crouch. As usual, firing your primary weapon is mapped to the right trigger, and pressing the right bumper fires your special weapon. You’ll only carry one gun at a time so there’s no need to switch, but you’ll have multiple special weapons, which are cycled through using the d-pad.

Aiming your weapons is handled by the right stick, which can be a little problematic at times. You see, while Shadow Complex restricts your character’s movement to 2D, the backgrounds are all in 3D, which means you’ll be being attacked from areas you can’t reach. The game handles this by auto-aiming your weapon based on the direction you point the right stick. For example, if an enemy is in the background above you, pointing up will cause your laser sight to target the enemy. Unfortunately, it doesn’t always work as well as it should, which can lead to some frustrating deaths. It’s by no means broken, but it stands out in an otherwise superbly laid out control scheme.

The graphics in Shadow Complex are beautiful and easily establish a new high water mark for Xbox Live Arcade titles. As you explore the large map you’ll be treated to some excellent detail work with a surprising amount of destructible environments. The water effects are outstanding whether you’re sprinting across it in hyper-speed or diving deep underneath it to avoid the strafing fire of a helicopter circling overhead. The explosions, a key component in an action title like this, is another standout feature. They really shine when you face off against some rather large robotic enemies, all of which blow up with considerable style and give an undeniable sense of satisfaction.

In addition to the amazingly rendered 3D backgrounds, the character models are also very strong with some cool looking enemies (both human and robotic) to do battle with. The character you play also looks good and manages to get even cooler looking as the game progresses with each new piece of armour or weapon he obtains. The melee attacks are handled in brief pseudo cut scenes and present some nice looking hand-to-hand combat. The in-game cinematics won’t let you down either, and you’ll be hard pressed to remember this is a downloadable release.

As wonderful as things look, there are a handful of graphical issues you’ll encounter. The most common is watching your character clip through objects, particularly when entering or exiting the ventilation system. I’ve also been allowed to melee an enemy despite being below them and a metal grate. Once I hit the B button though I was suddenly transported through the object and my attack commenced. They’re small issues, though, and didn’t detract from my enjoyment at all.

Thankfully, the audio holds up its end of the bargain as well, featuring very good voice acting from everyone involved and an engaging musical accompaniment to the action. The various sound effects are all excellent, and I particularly enjoyed the firing sound made by your final weapon. Enemies do not go quietly into that good night, either, as they’ll frequently scream when you dish out your own brand of justice. All these work together to present a really strong audio experience from the melancholy violin that plays when you load the game to the ending credits.

While the story of Shadow Complex isn’t overly intricate, it’s enough to give meaning to what you’re trying to do while never detracting from the action. The game itself is actually considered a bridge between two novels written by Orson Scott Card, Empire and the soon-to-be released Hidden Empire. Set in present day America, Empire focuses on a second Civil War, fought between conservatives and liberals. This serves as the backdrop for Shadow Complex, which opens with the assassination of the Vice President before quickly shifting west to find Jason Flemming (that’s you) and his date getting ready to explore some caverns. Things go downhill quickly from there and you’ll soon find yourself being thrust into the role of the unlikely, though not necessarily unwilling, hero.

You start off with nothing but a flashlight, which is arguably the most important item in the game since shining it on objects will tell you what ability is needed to proceed. For example, if you shine your flashlight on a grate and it turns orange it means gunfire will destroy it. If it turns green, however, grenades are needed. That fairly simple mechanic is at the heart of Shadow Complex as exploration and backtracking to find items will occupy much of your time.

One of the great things about this game, though, is that whether or not you backtrack to hunt down upgrades is completely optional. You can be a completionist and collect every one of the 100-plus items or you can be a minimalist and beat the game with a very small percentage of what’s available. You can take your time and explore every nook and cranny or just blow through on a “speed run.” The first time through, though, you’ll probably want to take your time and experience Jason’s transformation as you acquire all the pieces of armour — each of which brings with it a new ability like additional boosts on your jumps or hyper speed, which in turn help open up more of the facility to explore — along with an increasingly powerful series of weapons and gadgets.

Beyond the game having several different ways to be defeated, most of the individual puzzles and enemies also have multiple solutions. For example, at one point I found myself trying to get to the middle of a room with laser beams covering the floor. There were generators on each side that needed to be shot out and a wall in the middle. I couldn’t figure out quite what I needed to do so I checked some forums and others were asking the same question I had. What was unique and really a throwback to older games was that there were several methods that people had used to solve the problem. One had used the boosters, some the grappling hook and others had built a walkway using the foam gun. It’s that kind of innovative problem solving that adds a lot of replay value to the game. For me, as my character grew more powerful, I found myself trying to do things that not only got me from Point A to Point B, but also looked cool in the process.

Those playing through Shadow Complex for the first time should expect to invest six-to-seven hours, possibly more if you’re gunning for the 100 per cent achievement on the first go around. Once you complete the game you can start a new one where you’ll be stripped of your weapons and armour, but you’ll retain your level and any bonuses associated with it. I know that as soon as I beat it for the first time I immediately fired it up again so don’t let the relatively modest length dissuade you as there remains a lot of replay value with four difficulty setting, speed runs, beating the game with only a handful of items or trying to acquire items before you were intended to (affectionately referred to as breaking the game).

There’s also a series of challenges called “Proving Grounds,” which presents your character with obstacles and gives them only certain gadgets at their disposal to overcome them. There are 21 in all, and they can be replayed as often as you like in an attempt to better your time or overall score.

This is one of the best games I’ve played in 2009 at any price, but when you consider that downloading Shadow Complex will only set you back 1,200 points ($15) there’s no reason why this shouldn’t find a home on your Xbox 360’s hard drive. Download it now.