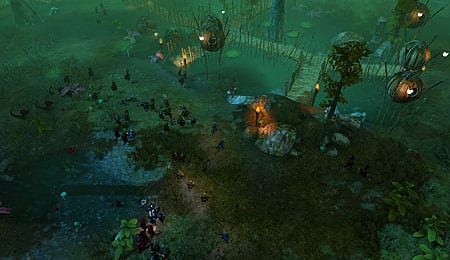 Looks like there’s a party going on at the old village. Invite your friends!

When I discovered that Seed Studios was releasing an exclusive PSN title called Under Siege, I was ecstatic. A memorable action flick starring my favourite actor, Steven Seagal, was being turned in a video game?! However, my dream came to a halt when I learned that Under Siege had no associations with the movie or the actor. Sad panda. Instead, this real-time strategy (RTS) game is set in a medieval fantasy world. It’s still got plenty of action, just no Seagal. The fantasy setting definitely rekindled my interest, but can Seed Studios be forgiven for having such a misleading title?

Usually a strategy game like this works great with a keyboard and mouse. Although Under Siege doesn’t allow this, it does give players the option of using the PlayStation Move motion controller. By being able to point and “click,” it almost emulates the PC experience. Smooth movement and very responsive controls help add to the enjoyment.

For those that only have the Dual Shock controller, the button layouts may seem overwhelming at first. However, the tutorial does an effective job in helping players become accustomed to the control scheme. You can even do things like modify the speed of the cursor along with invert the direction for the sticks and adjust their dead zones. Whichever controls you use, rest assured that you’ll be able to play without pausing to think about what the buttons do.

With a nice and pretty medieval setting, the graphics for Under Siege look marvelous. However, in order to fully appreciate this wonderful view, I’d recommend playing on a bigger screen. Otherwise, the game can seem quite busy — to the point that it becomes difficult to distinguish between your units and the enemies. While the character models and environments have a great level of detail, the game does suffer some occasional brief pauses during re-spawns.

It’s evident that Seed Studios has paid close attention to the sound effects. Everything from the characters’ voices to the clashing of weapons helps get players immersed in the battle. Although the music may not necessarily leave much of an impression, the option of playing your own custom soundtrack in the background is always a plus.

Under Siege is set in a medieval world following a small group of heroes, Eirik, Kari and Asgeir, who must fight against a huge invading army. Each mission begins with a few units and some money for you to either acquire new units or upgrade existing ones. Once you have decided on the units, it’s time for battle!

There are about 20 levels offered in the single-player campaign, each of which takes approximately 15 minutes to complete. In every enemy encounter, you should keep track of where all your units are located. An effective strategy involves constantly arranging your groups to perform different tasks.

Your units will gain experience and skills throughout the entire campaign, which carries over to subsequent missions. There are different types of units that vary in attributes as well as primary and secondary powers. For instance, not only do archers perform long-range attacks, they also have the ability to heal.

With the exception of the tutorial, the level of difficulty increases pretty quickly. Your opponents’ AI shouldn’t be taken lightly as they seem to have an effective strategy in place, thereby encouraging you to plan out carefully before blindly sending your units for massive attacks.

Since the focus is solely on battle tactics, there is no collecting of resources or building of structures involved. For those who enjoy RTS titles like StarCraft or Red Alert, it seems that Under Siege has cut out a significant aspect of the gameplay. Consequently, it may not have a lasting appeal.

Adding variety to Under Siege’s gameplay is the local (split-screen) and online multiplayer. Players have access to three options: co-op, competitive and download (indicating the possibility of DLC in the future). However, the co-op doesn’t have any maps available, which means at this time it is not accessible. It was definitely a letdown to have this feature only to realize that it isn’t fully functional.

Also included in this game is a full level editor, which allows you to design your own custom maps, set up missions and even create your own cut-scenes. With almost every aspect and detail available to be modified, creative players will have another reason to spend a considerable amount of time on this game.

Under Siege may not be a slam dunk title, but it does have plenty of qualities that should keep players hooked. Currently listed at US$19.99, it may seem like a hefty price, but if you are one of the many PS3 owners who were recently given a free PlayStation Plus subscription for 30 days, you should definitely take advantage of its discount at US$10!