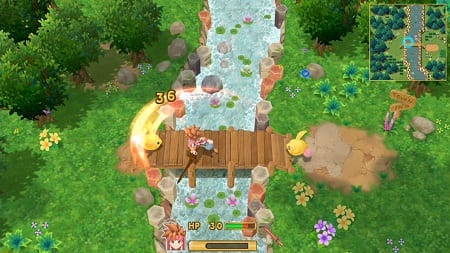 Mana’s remake graphics are retro, but not in a good way.

Secret of Mana is one of the best remembered games to include the words Zelda, Mario, or Final Fantasy from the SNES era. The announcement of the remake brought joy to purists, but when these types of things land, it’s a delicate balance. Is it a port? A remake? A graphical do-over? Secret of Mana lands somewhere in between all of these, and the result is frustratingly middle of the road.

A remaster of a Zelda-inspired game from the SNES generation, Secret of Mana features simple but effective controls essentially covering combat and interaction from a top-down view. Between exploring the overworld, dungeons, and towns, this is all fairly rudimentary stuff.

Equipment is a little more complicated, as the menu-driven process isn’t the most intuitive and has been mapped in a clunky way to the modern controller face buttons. Fortunately, though, the heart of moving and combat feels crisp and without issue. There appears to have been little done to modernize this aspect of the game in the remaster, but it gets the job done.

Some remasters are beautifully realized modernizations — see the Bionic Commando Re-armed series, which took 8-bit sprites and turned them into effective models played on a 2D surface. This is not the case. Secret of Mana still has changed sprites into polygons but they feel like a rush job, with the quality being around PSone/Dreamcast era.

Voice acting feels taken from a similar time, making much of it sound like an anime fan dub rather than a studio production with union performers. The soundtrack is legendary in some circles but comes off as underwhelming in this version. It’s a synthesized orchestral version but it often sounds like a cheap MIDI project; those who loved the original can opt to listen to the original SNES version.

For all its legacy value, Secret of Mana is a mixed bag from a modern perspective. The gist of it, drawing from the SNES era, is a mix between the top-down exploration of Zelda and the party system from the early Final Fantasy games.

NPCs in your party can be given rough programs to follow regarding combat and defense, and one of the game’s main draws is the ability to drop in co-op players or switch in real time.

This, however, has been simplified from the original into a four-step command system rather than an action grid. This is a clear trade off in depth for simplicity, but it doesn’t make the game better, especially in a world where complexity is celebrated. It also doesn’t help that the AI isn’t very good and often leads to you struggling to protect your party instead of them being an asset.

Perhaps the biggest issue is that the superficial enhancements don’t work, and thus the issues from the original are really highlighted. Because the game was groundbreaking, it means that comes without 25 some years of evolution.

The producers here kept all of that in there, warts and all, but the sterile package makes it seem like a cheap knock off rather than a celebration of the original.

While the co-op element is still enjoyable, Secret of Mana is bogged down by poor production values and dated mechanics. Long-time fans will probably have a better time playing the original on an emulator, and this version is unlikely to win over any new fans.