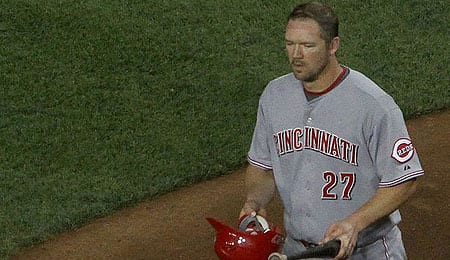 I have a trade offer to deal Ubaldo Jimenez and Scott Rolen in exchange for Evan Longoria and Jered Weaver. Do I pull the trigger?

My thoughts on this deal are very simple and straightforward. Find your way to the accept button and click it right smartly. The key for me is in the hitting department. Rolen has certainly been huge, but are his numbers sustainable over the second half? I think we’ll see some regression while at the same time Longoria will pick up the pace. Jimenez has been incredible so far, but if you take a quick look at Weaver’s numbers they are certainly nothing to sneeze at and I believe the odds are good that moving forward there will be very little to pick and choose between the two.

In a H2H format, Weaver’s 107 strikeouts in 94 2/3 IP are huge and his ERA, which is currently hovering around 3.00, although not Ubaldo-good is very strong. Always remember that the numbers we buy in trades are those heading forward and I believe you’ll be a very happy camper with both Weaver and Longoria for the balance of 2010.

Is there a trade offer here?

Another owner told me that these players that are all on his bench and are too good to sit, are available for trade:

I need a stud strikeout pitcher.

Since I am at the bottom in RBI and BA and in the middle in HRs and doubles and triples, I have one of the following pitchers to give up as I usually start five of these six each week: Max Scherzer, Zack Greinke, Justin Verlander, Mat Latos, Phil Hughes and Yovani Gallardo.

Losses do count in this 6×6 league.

Do you see a trade offer here for me?

Of that group, the only player that catches my fancy at all is the Kouz. Now, would I give up one of those SP for Kouzmanoff straight up? Probably not. What other players does this guy have active that is forcing him to offer up his bench? Target one of his active players and tell him to replace his loss with the bench that he’s trying to peddle. Looking at your rotation a couple of things should also be considered. Latos and Hughes are probably going to max out in the 175 IP range and Hughes has already been pushed back to avoid being overworked. If you need a late September push you might not get it from those guys. That’s just something to ponder when looking at trade possibilities.

To be able to trade effectively you have to find that match that works. If I had a dollar for every time I’ve been offered a bat that I don’t need for a pitcher that I have to have and vice versa, I’d be a wealthy man. You obviously are very strong in pitching and need an offensive boost. Go through your league and look for a team that is strong in the categories you need and weak in pitching and target those teams. A good trade is one that addresses the needs of both parties and with your strength in pitching someone has to be a bit short in those categories.

Re: Trade evaluation – Stanton for Escobar

I have Troy Tulowitzki (rest his Fantasy soul) in my 20-team, H2H deep league (23 + 2 DL spots). Clint Barmes was the best option available on wire.

I traded Mike Stanton for Yunel Escobar. The players left in my OF are Bobby Abreu, Carlos Quentin, Michael Bourn and Drew Stubbs. Did I do the wrong thing? I feel like I did. Too late, but you’ve got to learn.

Clint Barmes is Clint Barmes and I can see where that is cause for concern. He hasn’t performed nearly to the levels he produced in 2009 and even so, his batting average should always be cause for concern. Is Escobar the answer? Heading into the second half, I believe he is definitely an upgrade over Barmes, but giving up Stanton at this stage is a bit much. Stanton is one of the most hyped kids to be promoted in recent days and for good cause. His line at Double-A Jacksonville (21 homers with 52 RBI in 192 at-bats) was absolutely incredible and I think with the excitement associated with those numbers you could have done better.

Did you do wrong? Only time will tell as you did address your needs and I wouldn’t call this trade a disaster by any stretch of the imagination, but I share your thoughts in that you could have done better. When you look to move one of those highly-touted kids, you should strive to take advantage of the associated hype and max out on that opportunity and I think you could have done better. It’s all a part of the learning curve.