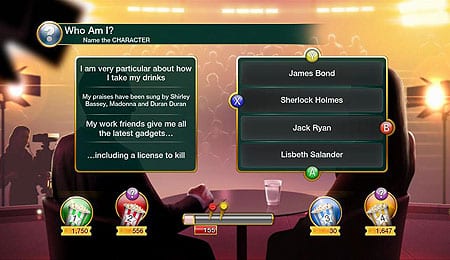 Scene It? is best played with friends and a lot of beer.

Casual games, if done right, can be great fun in groups — throw in the right mix of good cheer and good drinks and there’s bound to be laughs, along with some competitive spirit. However, bad casual games become poorly designed and frustrating experiences. Part of the reason why the Wii as known much for its shovelware as it is for Zelda or Mario is because too many companies tried to cash in by throwing together something with poor production values and clumsy design.

The Scene It? line of DVD-based board games has been around for a while now, and it’s movie trivia presented in a You Don’t Know Jack style of interface. Now the Playstation Network and XBox Live get Scene It? Movie Night, an interactive version of the game in downloadable format. Does it get the job done or does it fall into the trap that so many Wii games have before it? Let’s take a closer look.

It’s a quiz game, so what are you going to do? Buzz in (multiple controllers if you’re playing with multiple people), then select the right answer. The one part of the control scheme that really stands out is the fact that answers are presented in a list but corresponding button icons are overlayed in a diamond formation, just like on the PS3/XBox controller. Thus, you won’t have to worry about “Which one is triangle again?” when playing with your parents; it’ll feel intuitive based on the display.

Since this is a quiz game, the most important part of the graphics is the logistical part of it — is the text easy to read? Thankfully, it is, which means that Scene It? has already passed the first major test. Video clips get played at a resolution that looks roughly like upscaled DVD clips. That makes sense, as a downloadable game isn’t going to be filled with Blu-Ray quality clips. The only time I found the presentation a little rough was when you had to guess the movie poster based on various elements being gradually revealed and parts of it just weren’t clear.

Gameplay is presented across varying illustrations of mock-up movie scenes and movie sets. They’re high resolution and present an appropriate background, though you won’t remember them or care once the actual game starts. The voiceovers are written in to be self-deprecating and funny, though you’ll probably find the guy annoying, particularly when he starts using the same quips over and over. The music sounds like it was picked at random from a stock music library, and that’s fine; no one’s looking for anything particularly spectacular here, just a beat to keep the game moving.

Overall, it gets the job done — the presentation is par for the course and doesn’t get in the way of the party-game atmosphere.

Scene It? games take a player or players through multiple rounds of movie trivia; each round offers a different challenge, though the types of challenge may overlap within the same game. The different types of challenges include watching a clip and remembering details from it, basic multiple choice trivia, matching elements with movie titles (i.e., villains from various Batman movies), etc. Gamers will probably appreciate the challenge when famous scenes are recreated in 8-bit NES style — I particularly liked the plane-landing scene from Die Hard 2 redone to look like a scene out of Ikari Warriors.

And if you feel like you’re running out of questions, you don’t have to run out and buy the board-game version; planned releases of add-on content will expand your library, and you can choose to play a specific one at the onset of the game. I’m patiently waiting for my Star Wars version, thank you very much!

Points are awarded based on how quick you answer, and the final round is a speed challenge with a themed list of questions that constantly updates based on how you’ve answered. Games take about 10 minutes and winners are based on overall points (accuracy + speed) rather than just pure right/wrong score. If you’re with a group of friends, it’s pretty easy to get into a “Best two out of three!” scenario, and really, the game isn’t designed to be much more than that.

Scene It? Movie Night doesn’t pretend to be anything it’s not. It’s a casual quiz game designed for parties and groups. With a wealth of categories and upcoming downloadable content, it’s a good download if your noggin is filled with useless movie facts and you enjoy quiz night at the local pub.