Diamond Stocks: Sam Fuld Back in the Fold 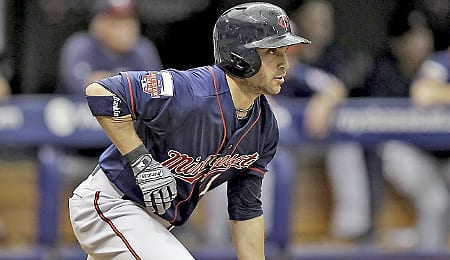 Sam Fuld is doing a bit of everything for the Twins these days. (AP Photo/Chris O’Meara)

Each week in Diamond Stocks, we look at five players whose Fantasy stock is soaring and five players on the downward slope.

Sam Fuld, CF, Minnesota Twins: “Super Sam” is making a comeback in Minneapolis. The former Ray who struggled in Tampa Bay early last season, has shined lately for the Twinkies, tearing through July at a .450 (18-for-40) clip, with a homer, six RBI, four stolen bases and a 1037 OPS. He’s even been playing in pain (see video below). If somehow your league also gives bonus points for human-highlight-reel catches, The Legendary Sam Fuld deserves your attention.

Kolten Wong, 2B, Cardinals: We featured Wong in our Wire Troll back in May, but he is anything but a troll in July for the Redbirds. ESPN owners are taking notice, with Wong experiencing a 34.8 percentage point increase to 38.9. That number still dwarfs his 55 per cent ownership in CBS leagues, but his popularity spike is justified. Wong has hit in seven of eight games this month at a .321 clip, tattooing five long balls while driving in eight and also stealing three bases.

Eric Campbell, 2B, New York Mets: Campbell’s ESPN ownership went down 0.1 percentage point to 0.4, but it hasn’t stopped him from hitting — when he’s on the field. The Mets’ Mr. Versatility doesn’t play every day, yet he’s carrying a 10-game hitting streak into the All-Star break and is 9-for-20 (.450) in July with an OPS of 1141. His .340 average and .386 on-base percentage mean Campbell may be worth an every day shot on your team if you are seeking infield depth.

Chris Heisey, LF, Cincinnati Reds: Think of Heisey as a cross in this segment between Fuld and Campbell. An overachiever with a knack for the big defensive play that doesn’t get into the lineup every day. Although, Heisey is making a strong case despite being unowned in ESPN leagues (1 per cent CBS), going 8-for-23 (.348) with a homer in July. His 3-for-5, two-RBI output on Sunday only strengthened his case for more playing time over Ryan Ludwick.

Scott Carroll, SP, Chicago White Sox: They’ve been singing Christmas carols in Chicago over this guy in July. Carroll (0.4 per cent ESPN, 2 per cent CBS) has posted back-to-back goose eggs over a combined 11 2/3 innings, notching wins over Boston and Cleveland. He has allowed only three hits, walking three and striking out eight in that span, which followed a rotten outing (seven ER, six IP) against the Angels. Carroll is worth a look in AL-only leagues as he’s 4-5 with a 4.19 ERA for the season.

Phil Hughes, SP, Minnesota Twins: Hughes is looking over-owned in CBS leagues (89 per cent) after giving up at least five earned runs for the fourth time in five starts Sunday. Though he picked up a win, he was tagged for five earned runs and 10 hits by the Rockies, raising his ERA to 6.32 ERA over his last five starts. Hughes (43.7 per cent owned in ESPN) is still racking up the Ks (108 in 121 2/3 IP) but is reverting to some old bad habits.

Freddie Freeman, 1B, Atlanta Braves: The universally-owned Freeman is just 4-for-20 (.200) in his last five games, and despite a solid all-around July (nine RBI), Freeman hasn’t homered since hitting his 13th of the season on June 27.

Julio Teheran, SP, Atlanta Braves: While we’re on the subject of slumping Braves, how about the once-invincible Teheran (100 per cent ESPN, 98 per cent CBS)? His season numbers still look dazzling, but his last two starts have been anything but, as he has allowed nine earned runs and three homers in 10 1/3 IP.

Adrian Gonzalez, 1B, Los Angeles Dodgers: Gonzalez is owned across the board, but is not really paying dividends to his owners lately. He is just 3-for-18 (.167) in his last five games and has just one long ball since June 23 despite a season total of 14. Once considered elite at the position, Gonzalez, a .291 career hitter, is batting just .250 this season.

Giancarlo Stanton, RF, Miami Marlins: Stanton is universally owned, but none of his owners is happy about his recent lag in production. He went 1-for-19 (.053) last week, and has not left the yard since June 26 after he racked up 21 in a hurry. Stanton has only driven in three runs since his last big fly.

Now it’s your turn. Let us know in the comments below who you see rising and who is falling.