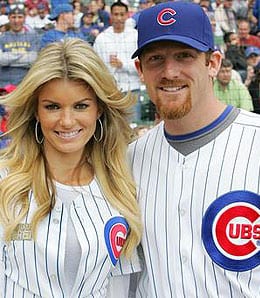 Can someone please administer a urine test for Ryan Theriot? This dude is suddenly jacking balls out of the park at a pace we’ve never seen before. He smoked another two long balls Wednesday, giving him five for the month of May, which isn’t even half over yet. Let’s put this in perspective. At the end of April, Theriot had all of seven career home runs in 379 games. He had never hit more than three in any one season. In fact, when he cranked his first career grand slam on May 1, it snapped a streak of 620 consecutive at bats without a homer. Theriot then preceded to hit three jacks in a span of four games, and he followed that up with the two-dinger night. What’s the dealio? This shortstop is batting .296, and is on pace for 25 homers and 34 stolen bases. Uh, can you say Fantasy stud? Depending on shallow your league is, he may not be owned, but that won’t be true very soon, so make your move if he’s out there. Here’s a guy we ranked as the 15th best shortstop heading into 2009, but he’s playing much better than that. Is it possible, at the age of 29, that Theriot is suddenly finding his power stroke? Extremely doubtful. Yes, he’s hitting more flyballs than last year, but in 2007, his flyball rate was even more pronounced. And given that he hit a grand total of five home runs in six minor league seasons, there is nothing to support this sudden surge. But, hey, if someone in your league wants to overpay for him, now’s your chance.

If you had read the Flops list in our MLB Draft Kit, you would have known to steer clear of Ryan Dempster. In fact, we were even more on the ball than we expected on this one, as so far this Canadian has been extremely inconsistent. I like the fact that Dempster’s K/9 is up (he’s put up season highs in each of his last two outings), but the walks, hits and homers are all up in the early going as well, and that’s trouble as his ERA is very close to 5.00. Now, bear in mind that his results were better in the second half last season (even though he got hit harder), so perhaps Dempster is a good buy-low candidate. I mean, I’d be worried about the 140-inning hike he had in 2008 over 2007 when he was switched back to the rotation, but the increase in strikeouts tells me he’s still strong. Expect improved results going forward, especially Thursday, when he gets the weak-hitting Padres visiting Wrigley.

Carlos Marmol owners had a good news/bad news night on Wednesday. He earned the save – his first in almost a month – but that was only because the ninth inning was rained out and he finished the eighth. So let’s not wet our pants here. Besides, Marmol had a horribly shaky outing, giving up two hits, a run and two walks and he uncorked a wild pitch in his one inning of work, thereby snapping a five game scoreless streak. He’s getting hit a bit more often this season, but that whole walk per inning thing he’s got going on is destroying his WHIP. Marmol is winding up on waiver wires right, left and centre, and this latest outing won’t stem that trend, regardless of the cheap save he earned. Yet, through it all, Marmol continues to rack up the holds, offering some consolation to those of you who reached for him with a ninth round pick on Draft Day.

Kevin Gregg, meanwhile, has settled down after a shaky start to 2009, and with his current run of six straight scoreless outings (5 2/3 IP, 2 H, 2 BB, 7 K), has solidified his hold on the closer job for the Cubs. Yes, he’s been easier to hit so far this year, and his control has been brutal, but he’s 6-for-7 in save chances and is fanning batters at a much higher rate than we’ve ever seen. Considering Gregg probably was drafted after Marmol in your league, he’s been a bit of a steal. Shockingly, there’s still a chance that Gregg is on your waiver wire, and now that he’s settling down, I don’t think he’ll last long.