The Wire Troll: Ryan Tepera Tackling the Ninth for Toronto 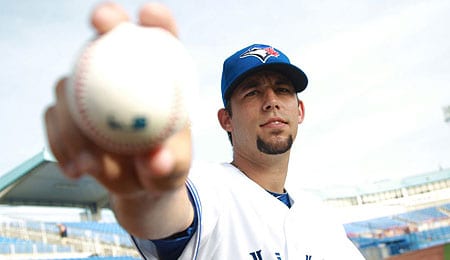 Ryan Tepera likes to use his cutter. (Brunch.co.kr)

Welcome back to another week of Fantasy baseball. We’re into late-June now, under three weeks from the All-Star break. Now’s the time to push for gains by using the wire.

This week, Roberto Osuna was handed a 75-game suspension by MLB (further increasing the value of one of our picks below); Bryce Harper says he’ll participate in the Home Run Derby if he’s selected to the All-Star Game; and Clayton Kershaw is scheduled to return to action Saturday.

And now, let’s get to this week’s Fantasy baseball picks…

Ryan Tepera, RP, Toronto Blue Jays (ESPN: 18.3 per cent; CBS: 30 per cent): With Osuna banished in the wake of a domestic abuse case, Tepera has stepped in and seamlessly taken over as closer of the Jays, nailing down all five of his save chances. Tepera has hurled scoreless ball in six of his last seven appearances, and he should maintain the gig until early August or even the rest of the season with news of Osuna’s lengthy suspension. Through 35 games, Tepera has compiled a career best 2.70 ERA, not bad for a dude that didn’t get hyped as a prospect. His arsenal consists of a fastball, cutter, slider and changeup. You know Tepera has arrived because he’s getting booed by Philly fans (see video below). What’s that? Philly fans boo everyone, even their own players? Never mind, then.

Justin Wilson, RP, Chicago Cubs (ESPN: 1.6 per cent; CBS: 2 per cent): With Brandon Morrow out, Wilson has been given the first crack at earning saves for the Cubs and while he did blow his first chance, he’s likely to get a bit more rope. Before Morrow went down, Wilson had been rolling, recording 10 straight scoreless outings. Still, Wilson’s command has regressed for a second straight year, and with an FIP of 3.55, he’s been somewhat lucky with his results this year. But if you’re trolling for saves…

Eloy Jimenez, OF, Chicago White Sox (ESPN: 7 per cent; CBS: 47 per cent): One of the top prospects in the game was promoted to Triple-A this week, so you’re running out of time to grab Jimenez if you want him. At Double-A, he morphed back into more a neutral groundball/flyball hitter, but has been hitting the ball on the ground quite a bit since the promotion. With his power, you want Jimenez hitting the ball in the air and now that he’s so close to the Show, the countdown will begin in earnest.

Noe Ramirez, RP, Los Angeles Angels (ESPN: 0.2 per cent; CBS: unowned): You’re unlikely to get many saves or holds from Ramirez, but he has earned some wins and is really racking up the Ks, with at least a pair in each of his last six appearances (10 1/3 IP, 16 Ks), and that has our attention. He’s a flyball pitcher that keeps the ball in the yard and his fastball velocity (such that it is) is up this year, so he’s gone to it as his main pitch, compared to the changeup last year. Perhaps Ramirez should rethink that mix considering the success he had last year (albeit, in a limited sample size).

Leonys Martin, OF, Detroit Tigers (ESPN: 37.1 per cent; CBS: 46 per cent): Martin’s in a mini slump now, whiffing too often, but is enjoying a great month, delivering extra base hits, driving in runs, stealing bags and hitting for a solid BA. He’s headed for his first 30-double season and has already seen more action than he did last year when he struggled to stay in the bigs. Martin has been fed more fastballs this year, and has handled them much better.

Austin Slater, OF, San Francisco Giants (ESPN: 0.1 per cent; CBS: 1 per cent): Slater is back in the bigs after the demotion of struggling outfielder Mac Williamson. Slater was kicking ass at Triple-A, racking up the total bases, flashing decent pop and putting together the best OPS of his career. There’s a chance he’ll see the lion’s share of the action in left for the Giants and considering how good a job he did at getting on base in his brief look earlier this season, he could be worth a flier in NL-only formats.

Vancouver-based 1990s’ pop/rocker Barney Bentall had a few national hits back in the day, especially with his band The Legendary Hearts. Here’s “Do Ya,” from their 1995 album Gin Palace.