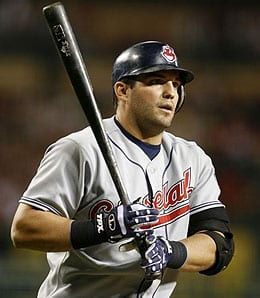 Ryan Garko is showing signs of coming out of his funk, but we’re still waiting.

Ryan Garko has started to see some time in the outfield this season as the Indians look for creative ways to get him in the lineup and also to help compensate for the myriad injuries they are facing. He got off to a great start, batting .291 with a homer and 10 RBI in April, and while he smacked four dingers in May, he hit just .226 with a 735 OPS. Currently, Garko is mired in a 3-for-20 slump and PT is becoming a bit of an issue, leaving him as an asset strictly in pretty darn deep AL-only leagues, and one that I wouldn’t touch at this particular time. I like the fact that his extra-base pop has bounced back a bit, and he continued to show signs of re-emerging into that 21-homer man from 2007 when he went yard Friday. Additionally, Garko has cut his strikeouts, and is doing a better job of drawing walks – he’s never had such a strong batting eye as he’s showing this year. Yet his BA continues to slip – a trend that logically should reverse itself. In fact, I think it’s reasonable to assume he’ll wind up around .280, which would make him a fine AL-only asset if he continues to hit with power. In the preseason, we had Garko pegged as a top 30 first baseman, something which he hasn’t quite accomplished, although he hasn’t been far off.

The Indians have brought rookie outfielder Trevor Crowe up a couple of times this season, but he continues to disappoint. And it’s not as if his work at Triple-A is demanding he get a chance in the majors. Most recently, Crowe was brought up on May 26 to replace Matt LaPorta, who was inexplicably promoted and then left to rot on the bench. Anyways, since that most recent promotion, Crowe has hit a bit better, but not well enough to pose a serious threat to LaPorta. Of course, the Indians would be unwise to bring LaPorta back unless they planned to give him a full-time gig. And even though they are floundering at 25-34 this season, because they are in baseball’s worst division, they’re just 3.5 games out of second place, so there’s no reason to tank the season just yet. In the meantime, Crowe really isn’t seeing enough action to even be on the Fantasy radar.

Back in the infield, Luis Valbuena cranked his first major league home run Sunday against the struggling White Sox. He’s starting to perform a bit better, hitting safely in five of his past six games, so if you need infield help in an AL-only league, Valbuena should at least be on your radar. With Asdrubal Cabrera on the DL, Valbuena is getting more of a chance to play and he’s been starting about half the time, already setting a new career high for at bats in a season. His extra-base pop is slowly developing and he’s shown the ability to steal bases and hit for average in the minors, so this former Southern League All-Star and Mariner prospect is definitely a player worth tracking.

Among the bigger disappointments for the Indians has been the play of Kelly Shoppach. He was one of the best-hitting backstops in the Junior Circuit last year, pacing all AL catchers in home runs. Well, he got off to a slow start this season, batting just .231 with six RBI and a 754 OPS in April, but that made him seem like Johnny Bench compared to his May (.196 with four RBI). And so far in June? He’s mired in a 3-for-26 slump and has an OPS of 554 for the month. Small wonder that Shoppach is winding up on waiver wires everywhere. He’s on pace to see more action than ever before, but is making last year’s breakout look like a fluke thanks to a far less patient approach. The strikeouts are adding up at a ridiculous pace, and the power – Shoppach’s main appeal last season – has faded drastically. We ranked this dude as a top 15 catcher, but he’s not even playing like a top 30 at this point. However, if you’re in some kind of freaky league that gives bonus points for getting drilled by a pitch, Shoppach is a stud. According to Bill Chuck of Billy-Ball.com, Shoppach recorded 12 singles and 11 HBPs through his first 100 at bats of the season. Hey, whatever it takes to get on base, man. Still, even though his OBP isn’t down that much from last season, Shoppach is on pace to fall short of his run total from 2008, despite seeing much more action.

When Jeremy Sowers failed to hold his rotation spot (temporarily losing his spot, at any rate), David Huff was given a chance and, if you recall, we advised picking him up, but keeping him on the bench for a couple of starts. Well, we were bang on there, as Huff got hammered in his first two starts, but since then, he’s been more effective, giving up 17 hits, seven runs, two homers and four walks in 14 IP while fanning 10 over his last three starts. Sunday, he earned his first major league win. The problem with Huff is his pitch counts tend to run high early, so he hasn’t been able to go longer than five innings, and that’s going to really limit the amount of wins he’ll get. Also, he’s had some issues with the home run ball. However, the former first round pick looks like someone who is capable of helping you out in strikeouts, so we again suggest that he’s worth a pick up in AL-only leagues.