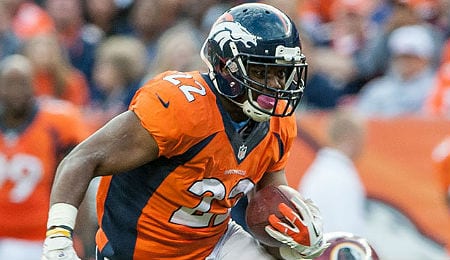 The parameters we shackle ourselves with for this article are as such: no Thursday players and no Colts (at least this week since we have covered a multitude of them over the last three weeks). Now that you know where we are coming from, we ask you to read and groove with us down the obscure spiral of depths that we so routinely try to dig to for your benefit. Without further ado we spill on the Fantasy alter our Start ’em, Sit ’em picks for Week 13.

Derek Carr, QB, Oakland Raiders @ STL: We saw a very hungry silver and black get their first win last Thursday. So are we jumping on the bandwagon? Carr is really finding himself and this is a winnable game. We hear you reference the Rams holding Peyton Manning to just a TD in their last home game. However in this year’s NFL that means almost nothing. For Carr, 14 TD passes to nine INTs doesn’t sound like the resume of QB who is 1-10 as a starter. First rounder Blake Bortles’ 8-15 ratio seems more conducive. It’s called a break out game and Carr will no longer be restrained.

Roy Helu, RB, Washington Redskins @ IND: The Colts rebounded from the Jonas Gray debacle quite well, although Jacksonville has cured many ails. Now the Redskins and their legitimate RB1 (Alfred Morris) will take to Lucas Oil Field. We don’t expect Morris to break any single-game rushing records but his weakness (receiving) is Helu’s strength. The Colts priority will be stuffing Morris and when third and long rears its ugly head, Helu will shine.

C.J. Anderson, RB, Denver Broncos @ KC: This cat is rolling and Peyton Manning will need his RB to alleviate the stout pass rush on KC. PPR alert: over the last month Anderson has 19 receptions for 225 yards. He also has 297 rushing yards (including his first career TD — see video below) over that same span. The Chiefs were gutted by a few long rushing plays by the lowly Raiders. Certainly stopping Anderson will be a part of their game plan. Yet 5’8″, 225-pound Anderson is all-purpose and his low centre of gravity reminds us of Maurice Jones-Drew, when MJD was a force.

Marqise Lee, WR, Jacksonville Jaguars vs. NYG: If you fall in a rusty bucket you are bound to come out with an orange stain on your ass. Yet you are not made of metal, and neither is Lee. While the shiny rookie luster has been fingerprinted with injuries, he is finally healthy. Lee is still a bottom of the bucket option but the rest of Jags WR corps is now injured. He is facing the Giants, people. While we hesitate to suggest Lee will score multiple TDs, we still love his chances.

Heath Miller, TE, Pittsburgh Steelers vs. NOR: The Saints top priority will be controlling Antonio Brown (#goodluck). Priority number 1.5 is Le’Veon Bell and his dual threat abilities. Then there is rookie WR Martavis “Alley-Oop” Bryant and his devastating red zone moves. There is a chance Saints DC Rob Ryan says Miller’s name in meetings this week but the veteran TE could be a check down vacuum for Ben Roethlisberger and his scrambling self.

Lamar Miller, RB, Miami Dolphins @ NYJ: The New York Jets may be struggling, but their defense against running backs has been great. Going up against a tough defense is hard enough and when you add in the fact that the Dolphins are prone to ignore the running game, that spells disaster for Miller.

Alfred Morris, RB, Washington Redskins @ IND: Morris has started to heat up so it only makes sense he’s about to disappoint. In three of the last four games, the Colts have allowed less than 4.0 yards per carry. We expect the Redskins to game plan around the pass, which makes Roy Helu the better start.

Julio Jones, WR, Atlanta Falcons vs. ARI: Jones is usually a must start, however, Arizona’s pass defense has been hot. In the last four games, opposing quarterbacks have totaled three TDs and five interceptions while averaging slightly above 200 yards passing. With Atlanta’s offensive line problems and Arizona’s great pass rush, Week 13 is looking bad for Jones.

Eddie Lacy, RB, Green Bay Packers vs. NE: Lacy started the season cold and has really heated up, but his Week 13 match-up proves to be too much. The Patriots defense has held its last four opponents to one total rushing touchdown while they averaged less than 100 yards per game on the ground, twice being held under 50 yards. Expect a shootout with limited running opportunities.

Now it’s your turn. Let us know in the comments below who you are sitting and who you plan to start.