This Day in Baseball History: November 13 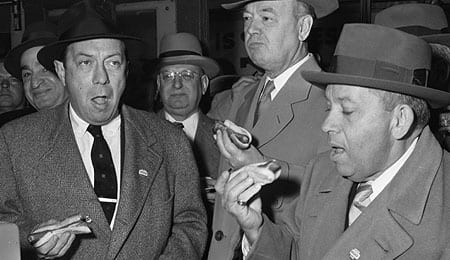 Things are a bit quiet right now, baseball wise, so we’re going to step into the Wayback Machine for our topic today, discussing a few events that occurred on this day, November 13, in years past.

It’s now been 55 years since former New York mayor Robert Wagner’s ill-fated plan for the Continental League was introduced. This proposed league was going to be a third major league in North American behind the National and American Leagues and was originally scheduled to launch in 1961. In August 1960, the dream was dead before it ever began as no games were ever played. However, it was not completely a waste of time, because the Continental League helped expedite expansion of the major leagues.

Forty-five years ago on this day, St. Louis Cardinals pitcher Bob Gibson beat out Pete Rose to win the NL MVP, capping a truly historic season. The Hall of Fame hurler was a nine-time All-Star but his 1968 season is considered perhaps the greatest ever compiled by a pitcher. The 1.12 ERA he compiled that year is still a record and helped get the Cards to the World Series where he continued to dominate, fanning 17 in Game One. Gibson was one of the main reasons the pitcher’s mound was lowered from 15 to 10 inches and the strike zone was slightly altered in 1969. Talk about having an impact on the game! Oh, Gibson’s postseason exploits weren’t limited to the mound. Take a look at the video below to see what he did in Game Seven of the 1967 World Series.

On this day in 1978, 35 years ago, the Yanks reached into their coffers and coughed up $875,000 for two years worth of starting pitcher Luis Tiant’s services. It was a great coup for the Yanks, stealing him away from Boston, where he had become a major fan fave. Tiant would go 21-17 for the Yankees, but he was clearly in decline. He then moved on to Pittsburgh as a free agent.

Fifteen years ago on this day, the ball that Babe Ruth hit for the first homer at Yankee Stadium sold at auction for $126,500 ($110,000 and 15 per cent commission). Did you buy it for me for my birthday? Why haven’t you given it to me yet?

Speaking of which, today is Mark Kiefer’s 45th birthday. He spent four seasons pitching out of the Brewer bullpen in the mid-’90s, compiling a 5-1 record and 4.29 ERA in 44 games before heading to Taiwan, where he never quite made it on to Tim McLeod’s sleeper list.

It’s also the 45th birthday of Pat Hentgen, a pitcher that’s just a wee bit better known, especially here in Toronto. The 1996 Cy Young winner and three-time All-Star won 131 games in 14 big league seasons, mostly with the Blue Jays. Hentgen only received 0.2 per cent of the vote in his only year on the Hall of Fame ballot, but he had some big years, and in addition to his Cy Young season, he finished sixth in the Cy Young voting in 1993, when he won 19 games in his first full season as a starter.

Now it’s your turn. In the comments below, share any memories you have of these events or players. We’d love to hear from you!

By RotoRob
Tags: Robert Wagner
Posted in BASEBALL, RotoRob, This Day in History | Comments Off on This Day in Baseball History: November 13