The Wire Troll: Robert Hagg Racking Up the Hits 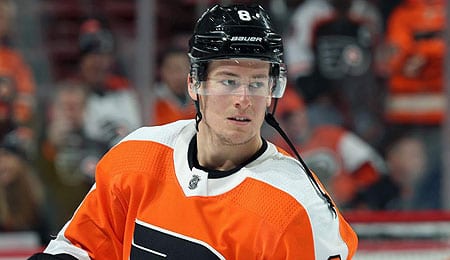 Robert Hagg will help you in several categories. (NHL.com)

Welcome back to another week of Fantasy hockey. We’re into November now, so you’re beginning to better understand your teams’ strengths and weaknesses. Use the wire to fix those holes, peeps!

This week, Tuukka Rask has left the team to deal with a personal issue, giving Jaroslav Halak even more rope in the Boston net; the Caps and Pens put aside their animosities to honour the victims of the Pittsburgh synagogue shooting; and Montreal, which has been spinning its wheels after a hot start, will now be without forward Joel Armia for the next 6-to-8 weeks because of a knee injury.

Robert Hagg, D, Philadelphia Flyers (ESPN: 1.5 per cent; CBS: 39 per cent): While he’s been quiet on the scoresheet over the last week, Hagg is off to a fine start and continues to provide nice value, especially since being moved to Philly’s top pairing. Over the last five games, he’s gone +8 and is someone the Flyers may consider flipping if they decide to go after Toronto holdout William Nylander. Hagg’s ice time is on the rise this month, and while he won’t continue to score on 11.5 per cent of his shots (although empty netters sure help, but wow — what accuracy — see video below), he’s already matched his career high in goals. The kid has some puck-moving skill that is just starting to manifest itself at the NHL level, but beyond points, he’s a huge help in hits (46, tied for third in the NHL) and blocks (20).

David Backes, C/RW, Boston Bruins (ESPN: 3.9 per cent; CBS: 20 per cent): Backes is off to a simply horrific start, having gone scoreless in 10 games with a -1 rating. But he’s way too good a player to be held down for long, right? We’re talking about a dude that’s topped 30 assists five times in his career, and with Boston in need of secondary scoring, he’ll get his chances. Backes is headed back to the wing on the fourth line, and taking away those defensive responsibilities may be just what the doctor ordered to get him going. It’s worth a shot to see if he can get going, as we find it hard to believe that he’s done like dinner.

Here’s “Mother,” another classic taken from the movie, The Wall, featuring a soundtrack by Pink Floyd.