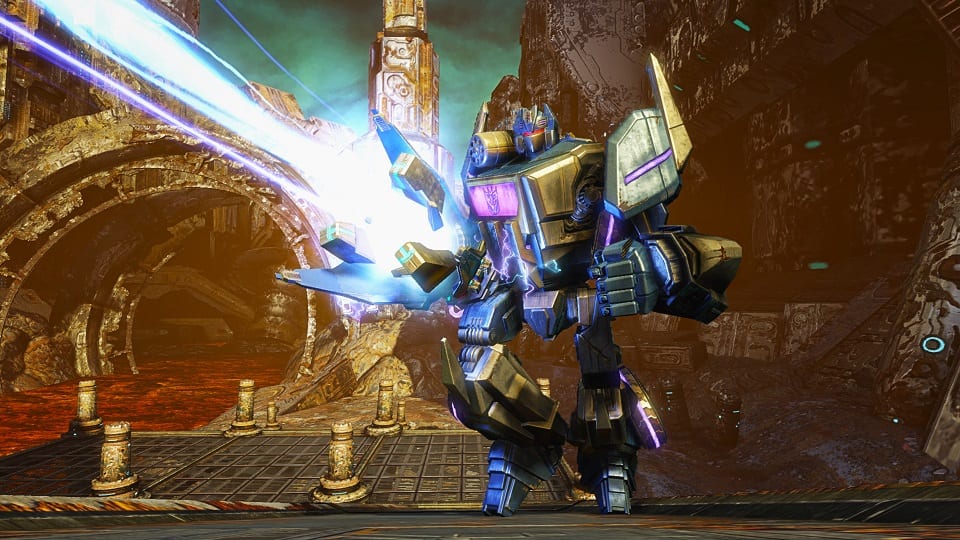 While many will debate the merits of Michael Bay’s film adaptation, far fewer can take developer High Moon Studios to task with what it did for long-time fans of the Transformers with its releases: War for Cybertron and Fall of Cybertron. This time, however, High Moon is out, replaced by Edge of Reality, which is tasked with melding the video game timeline with that of the films in Transformers: Rise of the Dark Spark. Let’s transform, roll out and see how it fared with its undertaking.

Nothing seems to have changed from previous Transformers titles as it still hits the same high notes (combat) and pitfalls (dicey vehicle handling, floaty jumping). Rarely did those shortcomings affect our ability to complete a section, and instead just resulted in some annoying moments in which we’d get hung up on an object when driving or overshoot a platform and have to restart our ascension.

Straddling the line between the G1 Autobots and Decepticons, and the ones from Bay’s movies, Rise of the Dark Spark maintains the high standards established by High Moon — sure, it’s effectively the Ian Malcolm line about standing on the “shoulders of geniuses,” but it’s still good. The game takes place on both Cybertron and Earth, with the robots’ metallic homeland representing the superior half.

It doesn’t look particularly next gen on the Xbox One, however, and there’s a disappointing amount of loading that takes place, both behind the scenes (lengthy sections involving opening doors) and during action sequences (they’ll literally stop while “loading” appears in the corner) throughout. And this was with the game installed onto the hard drive.

Outside of Peter Cullen, the unmistakable voice of Optimus Prime, there isn’t a lot going on in the audio department. Dating back to the first High Moon release, it’s been an issue for us that some characters have a G1 slant while others don’t, and that remains the case with far too many completely generic and forgettable performances. While weapon fire and transformation sounds are good, we find ourselves hard pressed to remember even a single musical track.

Skepticism was running high heading into Rise of the Dark Spark based on the game’s attempt to bring two divergent storylines together. Sadly, such feelings were well founded. The plot makes little sense as a standalone, and when viewed as an extension of the Cybertron titles (set, in theory, between the first two games) it’s even worse. It feels like the game began as the third part of that series and then had movie elements shoehorned in on either side with the “dark spark” (the Decepticons’ matrix of leadership) added as the glue.

There’s a near criminal underuse of key players from the lore, including what amounts to a glorified cameo from Megatron. A “been there, done that” feel permeates the campaign’s featured characters as well with the same handful from past games reappearing, including the Insecticons and Combaticons. Given the hundreds of available transformers, how is someone like Swindle significant enough to warrant another full chapter as a playable character?

Even without a great plot, Rise of the Dark Spark could have still succeeded as an action game, but as with the characters it never seems to branch out from previous titles. As longtime fans, we still took a certain satisfaction in gunning down giant robots, but the game recycles the wave-based attack far too liberally, making large sections feel like a single-player Escalation mode. With all that déjà vu it really makes you wonder how much was ripped straight from High Moon’s last installment.

Perhaps most damning is how rarely you’re actually asked to transform. Considering it’s the franchise’s signature element and namesake, you’d think there’d be areas where your vehicle mode would be featured. Outside of a few brief sections moving from point A to point B, however, you’ll likely spend the vast majority of your time as a robot.

Competitive multiplayer has been removed, leaving the campaign (which does not support co-op) and Escalation as the only modes available. Progression is shared between the two with every kill earning experience and an endless cycle of in-game challenges rewarding you with boxes that contain things like new playable characters for Escalation, weapon unlocks and upgrades, single use in-game buffs called T.E.C.H. and more.

It’s a fine system, even if the difference in goodies between a base-level box and a Prime box is disappointingly small. The problem is that you’ll start unlocking duplicates very early on, which makes the boxes you earn all but irrelevant long before you hit the level cap.

Both campaign and Escalation also suffer from enemy A.I. that is generally poor… so much so in fact that we completed the full 15-level Escalation mode on our first try with only one other teammate — a feat that anyone who played the first two games knows would have been practically impossible. There are moments when the enemy is dangerous, but that’s usually because they’re hiding somewhere above you and pelting you with cheap shots.

As frustrating as Rise of the Dark Spark can be, we still invested a fair number of hours beyond what was needed as the core elements that High Moon put in place work in conjunction with our nostalgia to keep us blasting away. It’s a flawed experience to be sure, but it’s not without its merits.

An unquestionable step back for the franchise, Transformers: Rise of the Dark Spark doesn’t do the first two Cybertron games justice. It’s not a complete disaster, but as fans of the fiction, we can only hope we eventually get a true third installment because there’s still life left here.