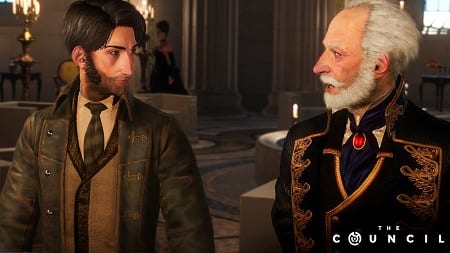 The Council’s political intrigue ramps up in its third episode.

The Council’s second episode ended with a cliffhanger regarding missing matriarch Sarah de Richet. The third episode, Ripples, picks up immediately where this left off, but the result is mainly exposition and some band-aid explanations.

Things do pick up, though, with two seemingly significant events. The first is a big meeting — and the buildup leading into it — between the invited historical figures, with a large political decision on the line. The group fractures, leading to a number of key choices in discussion and potential alliances.

Following that comes the resolution of another of the series’ mysteries (though honestly, it didn’t really make sense), and that leads to a clear-cut choice that should create a — dare we say — ripple-effect throughout the remaining episodes.

However, once that concludes, The Council falls back into its worst habit: walking around the estate again, checking out which bedrooms are locked or unlocked, and talking to the same cast of characters to see if they’ve changed. This lack of variety in terms of player experience is a dual-edged sword.

On one hand, it’s nice to see the gradual evolution of characters and relationships. On the other, it’s a rehashed clumsy storytelling mechanic and a rather dull environment other than finding new items previously unattainable thanks to leveling up certain skills.

There are also more visible technical issues this time, as the big meeting between the key players is filled with bugs, including grand speeches given in which no mouths are moving. Another bug we encountered was transitioning between balcony and bedroom; when we entered the bedroom we were stuck floating above the bed and unable to move.

It took several cycles of coming and going to the balcony until movement reset itself. In another instance, a seemingly dead body of a character is on the balcony and yet no one comments on it; later, it turns out this was just a very confusing bug.

The final section of the game finally gets you out of the castle and back underground for a moment, leading you to the most challenging puzzle of the series. But to solve this, it’s back into the house you go to look for items and clues.

This back-and-forth within the same map can be frustrating and lead to a sense of running around in circles (because you literally are at times). Despite that, the core story itself is intriguing enough to warrant interest in the next episode, and the main conversation mechanic is still a nice blend of RPG and narrative choice.

Ripples contains a lot of the same issues as its predecessors, though they seem more glaring now that The Council is three episodes in. However, the story moves with definitive choices to liven things up, providing some momentum heading into its fourth episode.