The Wire Troll: Another Ankiel Setback 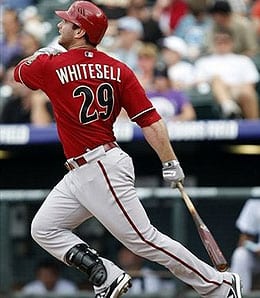 Josh Whitesell is getting a chance to take over first base in Arizona.

It’s been a hell of a week for some Fantasy owners (especially you Manny Ramirez owners), so without further ado, let’s take a look at this week’s waiver wire opportunities.

Josh Whitesell, Arizona Diamondbacks, 1B: It appears that A.J. Hinch is going to have his hands full in the desert replacing Bob Melvin. The D-Backs made the first of what could potentially be many moves when they called up Whitesell to replace the struggling Chad Tracy at first base. Down on the farm, Whitesell managed three homers, 20 RBI and an outstanding .356 BA. Arizona will be giving him plenty of at bats, at least initially, so grab him quick in NL-only leagues and monitor his progress closely in mixed formats.

Colby Rasmus, St. Louis Cardinals, OF: The injury to Rick Ankiel has created an opportunity for Rasmus to display that five-tool prowess that has had many a Fantasy owner drooling for the past several years. He should already be owned in keeper formats, but is a decent gamble in mixed formats as a replacement for the next several weeks until the return of Ankiel. It’s hard not to feel for Ankiel. Isn’t it a shame that every time he seemingly turns a corner he bumps into another figurative and sometimes even literal wall?

Chris Coghlan, Florida Marlins, 2B/3B/OF: The Marlins have turned to one of their top prospects in Coghlan in an attempt to bolster their struggling offense. In his past 10 games at Triple-A New Orleans, he hit to the tune of a .514 BA with three homers, 14 RBI, five stolen bases and 13 runs scored. Very, very impressive. Emilio Bonifacio and Cameron Maybin are both currently struggling and the Marlins aren’t bringing up a top prospect to have him sit. Coghlan should be rostered in NL-only formats and mixed leagues.

Kris Medlen, Atlanta Braves, SP: The Atlanta Braves have a very interesting conundrum facing them. Jo-Jo Reyes has been getting beat up on a regular basis and his days in the rotation are numbered. Down on the farm, the Braves have a phenom named Tommy Hanson that many thought would break camp in the rotation. Atlanta also has a 23-year-old named Kris Medlen that is currently producing better numbers for the Triple-A Gwinnett Braves. Currently Medlin is 4-0 with a 1.17 ERA and, in 30 2/3 IP, has stuck out 38 while only allowing 17 hits and seven walks. It is fairly obvious that he is poised to make that next step, as is Hanson. Both should be rostered in keeper formats, but in the event that the Braves turn to Medlen first, which is a possibility, grab him quick in all formats.

Julio Lugo, Boston Red Sox, SS: Lugo is finally back in the lineup for the Sox and is currently swinging a hot bat. Over his past three games, he is 6-for-13 with five runs scored. The name of the game for Lugo is speed, and because of the knee injury it is going to take a while to allow him to fully return to that aspect of his arsenal, but in the powerful Red Sox lineup he is a solid start in all formats.

Manny Burriss, San Francisco Giants, SS: Burriss has quietly been swinging a very hot bat over the past several weeks for the Giants. He has managed to go 15-for-32 with three steals over his past 10 games. Burriss’ hot streak has caused the Giants to move him up in the order, thus affording him more chances to score runs. He also has both shortstop and second base eligibility, a very nice bonus. If your middle-infield is struggling and you need a boost in your stolen base numbers, Burris makes for a fine addition.

Matt Palmer, Los Angeles Angels, SP: The 30-year-old rookie has now pitched back-to-back great efforts for the Halos. They sure have needed the boost with most of their rotation currently on the DL. The Angels are hoping to see both John Lackey and Ervin Santana return shortly, but will still need the services of a solid number five man at the back of their rotation. Palmer is a solid addition in AL-only leagues and his progress should be monitored very closely over his next several starts for mixed formats.

Barry Zito, San Francisco Giants, SP: After his first two starts, most of us were ready to write Zito off as simply having another typical disappointing year. In what must be considered a surprise of biblical proportions, his past four starts have been very steady. Zito has managed to allow only four runs over that span, three of which came during his April 27th start against the Dodgers. It’s the middle of May and he has a very serviceable 3.57 ERA and 1.25 WHIP. Zito is undoubtedly risky and potentially very dangerous, but worthy of a roster spot in NL-only leagues and, with one more quality start, should begin disappearing off the waiver wire in mixed leagues.

Juan Pierre, Los Angeles Dodgers, OF: The PED-related suspension of Ramirez has, for the next 50 games, opened a window of opportunity for Pierre. It looks like the Dodgers have moved Pierre into the lead-off slot and he’s batting 6-for-11 with three RBI and a stolen base over his past three games. If your fantasy team is in need of runs scored and stolen bases and he’s still out there on waivers, grab him quick before he’s gone.

Jorge De La Rosa, Colorado Rockies, SP: Those of us that had high hopes for De La Rosa after his great stretch run last year are very happy. Saturday, he pitched a gem, allowing only four hits over eight innings while contributing 12 strikeouts. De La Rosa has to keep the walks down, a problem he’s had in the past, but with four of his past five starts being of the quality variety he should be owned in all formats at this time.

John Grabow/Taylor Yates, Pittsburgh Pirates, RP: Matt Capps is currently going through what has been termed “minor discomfort” in his right elbow. This would be the same Capps that missed two months last year with shoulder problems. A trend is starting to rear its ugly head here. He is slotted to return at the beginning of the week after taking most of the past week off. Grabow and Yates have both struggled this past week, pitching very poorly. In the event Capps’ elbow woes continue, one of the two by default will most likely end up with the closer gig. I’m betting on Grabow as he at least has the history when he replaced Capps last summer. Keep this one filed under the wait-until-we-get-more-information category, but be ready to move quick should Capps end up on the DL.