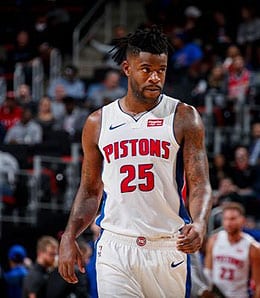 Reggie Bullock has pushed his way onto the Fantasy radar. (Twitter)

Welcome back to another week of Fantasy basketball. It was another interesting week as coaches continue to tinker, and players begin to find their groove. Free agency is ripe for the picking! There are pickups with high potential and low ownership percentages galore. Keep busy.

This week in the NBA, LeBron James took Anthony Davis out for dinner, adding fuel to the AD trade rumours fire and increasing speculation that there is tampering happening here; the Rockets make the history books with 26 three pointers as they quickly jumped from 14th to seventh in the Western Conference; and first-place Toronto Raptors coach Nick Nurse spoke out about getting another lump of coal from the NBA as his team was snubbed on the Christmas Day game.

And now, onto our Fantasy basketball waiver wire picks of the week…

Robert Williams, PF, Boston Celtics (ESPN: 2 per cent; CBS: 14 per cent): This 6’10″, 21-year-old has been one of the best shot blockers in the league this week. Over his last four games, Williams has twice enjoyed five-block games, putting up 13 total. Block party! Aron Baynes and Al Horford are out with injuries for the time being and Williams is going to be the main benefactor of this situation. Once they do come back, chances are that Williams will drop off quickly, so snatch him off waivers while you can. (We personally picked him up in one of our leagues just in time for his second five-block performance!) This kid is athletic, huge and can play some serious D; if he can find more in-game consistency and develop his offensive game, he has a chance to be a beast.

Reggie Bullock, SF/SG, Detroit Pistons (ESPN: 2 per cent; CBS: 26 per cent): Back-to-back games of 24 and 33 points have put Bullock on everyone’s radar. He knocked down seven three pointers in the latter performance, an overtime affair, and all told over the last week he’s averaging 38 minutes which is a big part of his recent success. Bullock has shown an ability to make his own shot, and when he gets hot, look out (see video below). His starting spot and minutes seem to be secured, so his ownership is increasing rapidly. Now’s your time!

Joe Harris, SG, Brooklyn Nets (ESPN: 1.5 per cent; CBS: 50 per cent): Harris has been consistently stringing together efficient games nearly all season. He’s been a real great source of treys lately, knocking down three shots from beyond the arc in each of his last five games. Harris is a shooter who can touch on all categories. This isn’t a breakout player; he’s a full time position holder for you owners that have the spot available.

P.J. Tucker, SF, Houston Rockets (ESPN: 1.9 per cent; CBS: 30 per cent): Tucker had his first double-double of the season against the Wizards on Wednesday and followed that up two games later with a 16-rebound performance. He’s put together games like this in seasons past, but hasn’t found a way to make it stick. Tucker’s focus has always been on the intangibles and defense, s o this is a surprising run for him at a time when the Rockets desperately needed it. Keep watch… maybe the veteran has more to offer than we all expected.

Ivica Zubac, C, Los Angeles Lakers (ESPN: 0.4%, CBS: 3%): The Lakers 2016 second round pick showed off his potential on Friday with 16 points and 11 rebounds to go along with a pair of blocks and steals. With JaVale McGee sitting out, Zubac played 32 minutes and may have earned more going forward. Zubac hasn’t appeared in many games this season and in others his minutes have been extremely limited. This is a definite situation to monitor as Zubac may sneak into the rotation alongside Tyson Chandler and McGee. Stay tuned!

We’re back with yet another tune from Pink Floyd‘s “The Wall,” taken directly from the movie. Here’s “Another Brick in the Wall (Part 3).”