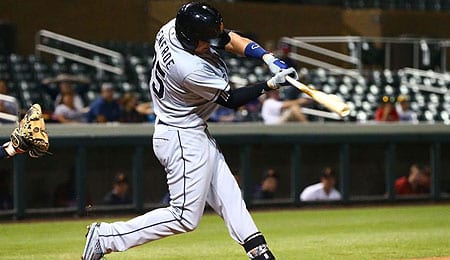 Is Hunter Renfroe ready to be a force for the Padres? (Mark J. Rebilas-USA Today Sports)

The Padres, having just suffered through an eighth losing season over the last nine years, are in desperate need of a star to emerge.

Outfielder Hunter Renfroe, the team’s 2013 first rounder, may be ready to be exactly that man.

When he was drafted, we projected him as a Raul Mondesi type, but it’s clear Renfroe won’t have that kind of elite speed. However, he’s projected to have more power than Mondesi, who reached 30 homers three times in a 13-year career.

Renfroe was our No. 55 prospect in 2015, but dropped off the list this year after a substandard season at Double-A in 2015 — especially early on when he really struggled.

Renfroe still has lots of work to do on his strike zone judgment and given his adjustment period at every level, will likely need some time to kick it into gear in the Show, but this kid has future star written all over him.

In fact, we liked Renfroe enough to recommend him as a waiver wire pick mid-season as we began to anticipate his promotion. Inexplicably, the Padres dragged their heels so it took until September before we finally witnessed his MLB debut, but he sure as hell didn’t disappoint, mashing four dingers (all in his first five starts) and driving in 14 runs while batting .371 in just 11 games and 35 at-bats. Renfroe was especially dynamite in the final week — taking home an award for his efforts (see video below).

Hell, he even mashed a ball over the building in left field at Petco Park — something no one had ever done in a game before.

And his first career homer? Oh, it was off some scrub named Madison Bumgarner.

Clearly, those numbers are unsustainable and we do expect some growing pains in 2017, but Renfroe, 24, is in line to be San Diego’s starting right fielder on Opening Day next year. He has the arm to play right and is considered quite athletic given his size (6’1″, 214).

It’s puzzling to wonder why he was left to languish in the minors after the Padres traded away Matt Kemp and Melvin Upton Jr. Then again, there’s a reason San Diego has been mired in nearly non-stop ineptitude over the last decade. Perhaps Renfroe can help change that culture — especially if he can round out his game with a bit more patience.

He’s poised to become a huge part of the Padres’ attack, combining with fellow prospect Manuel Margot and holdover Wil Myers to form the meat of the order. Perhaps 2017 is the year San Diego stops the bleeding and starts working its way back to at least .500 baseball.

Now it’s your turn. Let us know in the comments below what you’re expecting out of Renfroe next year and where you’ll be targeting him in your draft.