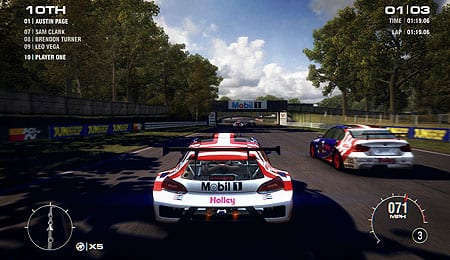 I can normally judge how much fun I have had playing a racing game by the way my neck feels after I am done. When I am bored with them, it stays stationary, but during the more enjoyable ones it jerks around like crazy as I go through turns. Well, considering that I would rub my neck after all of the longer Grid 2 sections, I consider it a success. Yet there was little else I would remember the next day — and that is a great way to sum up Grid 2: it’s a lot of fun, but nothing that gamers will remember in the long run.

Grid 2’s controls are exactly what they should be. They are easy to pick up and play right away, however mastering them will take a lot of time. The game goes for more of an arcade feel than Forza or Gran Turismo, but do not expect to take turns as easily as racers like Burnout. Take a turn too fast and the car will go spiraling out of control, though they can still take a crazy amount of damage before they are unusable. In a nutshell, they just work exactly how they are supposed to.

Grid 2 offers tracks from all over the world to drive across, and the graphics do them justice. The game does not push any graphical barriers, but zooming through these areas always offered some fun eye candy. They also had a nice variety to them, taking place both in cities and in wilderness areas such as forests in California. The game also boasts a good selection of tracks and sound effects, which help immerse you in the driving experience.

Grid 2 offers a decent variety of events that mostly consist of races. These generally contain minor differences, such as whether you compete in a series of one-on-one races or just compete in a single race against many cars. There are also occasional events such as one in which you compete for points against an opponent by passing other cars, yet these are infrequent. The regular events are solid, but they bring little new to the table.

One feature I really appreciate is that when replaying tracks, the game keeps a very detailed record of what happened in the last race. It uses this information to then give the player advice on what turns gave them trouble and how to better approach them when they come up again. This helped me a lot in improving how I would race, and I found myself using this to replace the rewind button later on during the game.

The one area where Grid 2 distances itself from other racers is the goal of your racing. Unlike most in which you either are aiming for money or championships, here you are racing to gain fans and followers in some kind of Internet career. Racing in ways that have you avoid collisions can let you gather more fans, but this ultimately boils down to the same goal of winning events just like every other racer with a little more wiggle room for failure.

Collisions play a huge role beyond this as cars take damage. These can both impair your driving abilities and render your car unusable, which results in needing to restart the event. The game allows you to take a lot of damage, as I was seemingly finishing every race with a missing bumper and countless dents.

Online play is very smooth overall. There were a few bits of lag, but these were very infrequent. This mode, like the rest of the game, offers little new for the player, but it’s a solid online racing experience. It also offers two player split screen for those seeking such a feature.

Grid 2 is not the kind of game that will blow gamers away. It is just a very solid racer with tight controls and enough content to keep you busy while bringing nothing new to the table. If that is what you want, then Grid 2 is a great buy.