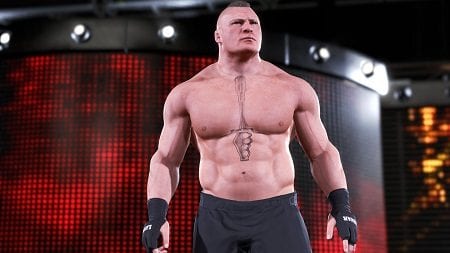 It’s an interesting time in the wrestling business. For long-time fans, it might be the most exciting moment since the hallowed Monday Night Wars with billionaire-backed All-Elite Wrestling debuting on TNT last month, NXT moving from the WWE Network to go head-to-head with AEW, and SmackDown! making the jump to network television (and most assuredly away from being the “B” show). Into this climate comes WWE 2k20, the series’ 20th anniversary and ninth installment since moving under the 2k banner.

Some significant changes have been made to how 2k20 handles, and though it isn’t like learning the game from scratch, there figures to be an adjustment period for long-time players. While the developers have stated their reason for making the change is to streamline things for newcomers, the fact that they didn’t include the option to re-map controls or revert to previous years seems a poor choice. We didn’t love the change, but it becomes second nature pretty quickly.

Somehow, WWE 2k20 looks substantially worse than its predecessor. Character models seem to be trending in the wrong direction, and the typically smooth animations have been undermined by wonky physics, spastic rope movement and guys sinking through the mat (no doubt, many of these will be cleaned up via future patches). It’s even worse during the MyCareer storyline as the CAWs would look more at home on the Xbox 360 or even the original Xbox than an Xbox One X.

Commentary continues to be painful outside of the scripted elements with lines of dialogue being repeated within moments of one another. We’re not talking about lines becoming familiar after dozens of matches here, we’re talking about hearing the same three or four lines of commentary every time we use a chair. It’s also situationally inaccurate consistently, turning a key element into little more than white noise. Wrestler voices are all over the map, ranging from good (Samoa Joe) to comatose, while the theme music and entrances are at least fun.

On paper, WWE 2k20 offers up plenty of content: there’s a new MyCareer mode, a new Showcase featuring the Four Horsewomen (Charlotte Flair, Becky Lynch, Bailey and Sasha Banks) and their role in the women’s revolution, towers, Universe Mode and (eventually for those that pre-ordered) the 2K Originals with Bray Wyatt‘s alter ego, The Fiend. When you start digging into that content, however, there are plenty of new and legacy issues to be found.

Let’s start with MyCareer, which adds a female protagonist this time around, telling a two-pronged story of childhood friends Tre and Red that share a dream of becoming WWE superstars. Before embarking on their journey, they create a list of things they’d like to accomplish, and the story primarily consists of them looking back on their career on the cusp of being inducted into the WWE Hall of Fame (despite looking identical to their high school selves).

It’s not the worst idea for telling a story, and the matches it sets up are varied, as are the various wrestlers you encounter. It’s told mostly for laughs, though, and it isn’t remotely funny. It’s just dumb. A few serious threads are woven in, but they fall flat as well. Told across 18 chapters, it’s incredibly long and seemingly can’t be skipped — even if you fail something you’re forced to re-watch the setup. It’s rough.

Character progression is still a sore spot, made even sorer by the fact that you’re now bound to two wrestlers, making the sprawling skill tree all the more daunting — this assumes, of course, that you want to push through the MyCareer mode as matches do get tougher, so you’ll want to improve various attributes. Customization is again tied to loot boxes with individual items exorbitantly priced, albeit only for virtual currency. It ultimately feels like an artificial way to make you spend huge chunks of time buffing up your wrestler(s).

Showcase mode fares better, due to no small part to the scripted elements that allow the commentary to actually go with the match. The trade off is that the spots have already been called, and you’re bound to the historical version by way of objectives, each of which you’ll need to accomplish to advance. These matches are often time consuming affairs, and if you mess up late in the match you can find yourself starting over. It’s well past time for 2K to add mid-match checkpoints to reduce the amount of replay.

Even though a lack of polish and limited improvements across modes are long-term problems for the series, you could at least count on the game to create a strong in-match experience, allowing you and your creativity to take things from there. Sadly, even that has eroded. At the top of the list is how off collision detection and targeting seem to be, and how frustrating it is to be sure you’re avoiding something only to crumble to the mat and vice versa.

Opponent A.I. is all over the place, too — sometimes wrestling like a clueless jobber and other times countering multiple finishers with ease. It’d be folly to try to list all the glitches and goofs right now, but can we expedite a fix for when a nearly beaten opponents kicks out at two, creating an animation in which you sit in stunned disbelief until the A.I. invariably gets up first and is waiting to deliver a blow?

While there’s no doubt the game will improve over time as patches roll out, WWE 2k20 in its present form is the series’ low point. We hope the developers take a serious look at the product and come back strong with better presentation, smarter storytelling and quality-of-life improvements.