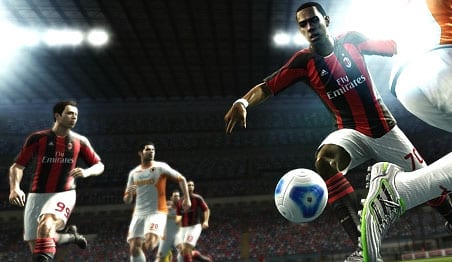 For the bulk of the 2000s, Pro Evolution Soccer was the premier football video game series. In recent years, though, EA Sports’ FIFA series has been more innovative, more complete, and — perhaps most importantly to the guys that pay the bills — more popular worldwide. With Pro Evolution Soccer 2012, Konami has brought in new control options, new features, and new tweaks on various modes. Is it enough to win the virtual footy championship? Let’s find out.

PES 12 can be played by a beginner using only the primary pass/shoot/sprint buttons. However, its biggest strength is its in-depth control scheme. In-depth also means complicated, and the laundry list of dribbling/passing/trick-move possibilities looks like the control tutorial from a fighting game. Master them and you can move like a legendary striker looking to win the World Cup Final. Semi-master them and you’ll find your player clunking off in the wrong direction or randomly letting go of the ball.

It’s detailed and it takes practice, but it provides the right balance between game depth and in-match creativity. It’s just got a bit of a learning curve.

This year’s biggest addition is off-ball running controlled with the right analog stick, a feature that allows you to create all sorts of plays on the fly if you’re nimble enough with your fingers and thumbs. It’s almost like having someone drop in for co-op just for a set play, and when it works, it works beautifully.

Soccer is played on a very big field, so it makes sense that the default camera views for PES 12 are high and wide. However, you miss graphic/animation detail from these views, and it’s too bad because the game really comes alive when you use a closer camera angle. The individual player movements, the scope of the crowd, the authentic lighting, and the details of the pitch are vibrant. Like most sports games, player models are detailed enough to look roughly like their real-life counterparts, but they’d never be mistaken for them in a side-by-side comparison. It’s unfortunate, then, that collisions and moves seem to be more canned animation than the ragdoll physics seen in recent EA Sports games. This canned animation is particularly noticeable when sprinting, as players look like their animation resets before it finishes.

The stadiums are well done for a sports games, with a smattering of home shirts in the crowd and appropriate levels of attendance based on the league and importance of a match. I couldn’t quite pinpoint it, but something about the PES crowd seemed less cardboard cutout-like than other sports video games.

For fans new to the FIFA 12 vs. PES 12 franchise rivalry, one of the key sticking points is that PES 12 pales in comparison to the FIFA 12 roster of licensed players and teams. This obviously translates to the graphic experience, as you simply won’t see the number of authentic faces or jerseys as you may like.

In-match commentary comes from ESPN UK play-by-play man Jon Champion and ITV commentator Jim Beglin. That may sound like a good place to start but the duo has long stretches where they remain silent or don’t say anything particularly unique to the current match situation — and in many cases, player names just aren’t mentioned. Their recorded performance is fine, it just seems like they didn’t record nearly enough lines.

Sports game soundtracks are usually pretty inconsequential, and PES 12 is no different. They’re just about a dozen randomly selected tracks to go with loading screens. As a personal aside, though, Cold Cave’s “Life Magazine” was one of my favourite songs of 2010 and pretty cool to hear in a major video game release.

During the various manager and career modes, non-match action is moved forward by cut scenes. While it’s a reasonable design decision considering most sports franchises handle this with simulated emails and messages, it winds up coming off looking cheap, as the scenes look like leftover storyboards from Business Meeting: The Game, and all conversations are strictly text captions.

Let’s get this one out of the way — if you want authentic teams and authentic players, PES 12 isn’t for you, at least not out of the box. Many fans have created their own roster/stadium updates, and you can search around the web to download these to a USB drive and patch your game. Or, if you’re really diligent, you can create the players and teams yourself. On the flipside, PES 12 has license rights for several major UEFA tournaments, if that’s any consolation.

Okay, so now that that’s out of the way, let’s break down the actual gameplay. From friendly matches to tournaments to league play, you can play all over the world. The aforementioned deep control scheme makes much of ball control feel fluid (even if the animation doesn’t always properly accompany it). Passing is performed with short and long buttons, both gauged by a power meter. However, this winds up being inaccurate and limiting at times, and you’ll wind up seeing a maxed out passing meter slowly roll a few feet. Shooting follows the same issue, as the actual power meter doesn’t always properly reflect execution.

Like footy tactics? Then you’ll love PES 12. The advanced tactics allow you to set up strategy and formations, then execute. Combined with the off-the-ball running, you’ll feel like you have greater control over the squad than previous soccer games.

Of course, there’s more to PES 12 than just your standard modes thanks to the various Football Life options. Master League allows you to take a custom player and control all aspects of him, both on the pitch and in the locker room to try to gain favour with everyone associated with the team, including the fans. Become A Legend lets you take one player from his humble beginnings all the way through to being an all-world star. You’ll customize everything from his looks to his training regimen, and during the match, you’ll only control him to give you a position-based perspective of gameplay. When you’re called off the field, though, PES 12 doesn’t have an instant simulation. Instead, you can go double-speed, which really isn’t that fast and winds up creating a minor annoyance. Club Boss taps into roster management with more of a straightforward “manage the salaries.”

PES 12 is a very solid sports game, but a victim of its own limitations. New control and tactical options provide a robust footy experience, but without the sheen and polish to make it totally immersive. Similarly, cut scenes and interactions designed to bring Football Life to (no pun intended) life wind up being stilted and awkward. With recent news that EA Sports’ FIFA is outselling PES 25 to 1 in the footy-mad UK, this version is a good entry to satisfy brand loyalists but not innovative enough to reclaim its former crown.