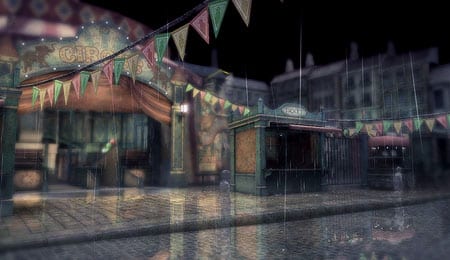 All roads lead to the circus…

Perhaps the most unusual title to hit the PlayStation Network in 2012 was Tokyo Jungle, the bizarre, post-human survival game that had you start as a Pomeranian and then move up. Now developer PlayStation C.A.M.P. is back with rain, which rates as one of the most highly anticipated downloadable games this year. Although the two titles couldn’t be more different, there is one attribute that ties them together: uniqueness.

There are only a handful of moves at your disposal, and all three of them work as intended. Holding down square makes you run, “X” jumps and circle interacts with specific objects that glow brightly. That’s it. And outside of a moment here or there when it would have been nice to be able to control the camera, I never found myself at odds with the setup.

With rain taking place in a world essentially devoid of light (and thus, colour), the game relies on its architecture and unique mechanic of appearing/disappearing to keep things visually engaging. The result is an artistic success. Aided by loads of dynamic camera angles, rain does a great job of capturing the spirit of the town, alternately raising hopes and dashing them while consistently conveying the accompanying senses.

Creature design is interesting, particularly the hulking presence of The Unknown, which perpetually stalks you and the girl you’re attempting to save. The way your shadowy form looks in the rain, and then tracking your own footsteps when dry and invisible is very cool as well. It’s not the most technically impressive game you’ll download this year, but it effectively draws you into its world.

Music plays a huge role in rain, offering up a selection of mellow acoustical accompaniment that mirrors the game’s tonal adjustments on the fly. One moment everything is calm and peaceful, and the next you’re running for your life as The Unknown comes bursting out of a doorway. It’s not as though rain is scary in the traditional sense, but it can lull you and provide quite a start when it wants. Much like Journey, rain is as much a sensory experience as it is a game.

Home sick in bed, a little boy stares out his window into a rain-filled night and spots the faint silhouette of a young girl… and then, her pursuer. As she flees the boy decides he has to help, and he leaves the comfort of home to follow her into the darkness. Soon, the boy finds that he, too, has become invisible, and like the girl he can only be seen when rain is falling on him. There’s no turning back.

That’s the plot of rain, which plays out as a mystery of sorts. Who is the girl? What’s chasing her? And why? Where are you? Why is this place devoid of human life? Where did these creatures come from? How did you become invisible as well? And, most importantly, how do you escape?

There isn’t a ton of exposition, though what’s there is slickly presented within the world itself as lines of text appear on the buildings to push the storyline forward. Still, this game isn’t about the payoff — even after playing through it a second time I didn’t find any “AHA!” moments that truly explain what’s happening. Instead, rain is really about experiencing its world.

As a game, rain is best classified as a puzzler with your central ability being that you’re visible in the rain and invisible when in cover. Additional gameplay mechanics (making noise to lure enemies, tandem actions, light platforming, etc.) and hazards (mud makes you visible, enemies that can enter cover, etc.) are introduced as you progress, but everything boils down to one rule: don’t get caught.

For better or worse, that’s not very difficult. rain is a pretty straightforward game, and it’s rare that the solution isn’t readily apparent. And just in case you do struggle, there’s an in-game hint system you can trigger by pressing the “select” button. There are a few moments of trial and error to be found, but they’re usually at the level of, “Oh, I need to jump down from here instead of taking the stairs. Got it.” Once again I’m compelled to echo my earlier sentiment: rain is more about taking it all in — the sights, the sounds, the storyline — than challenging your gaming or problem solving skills.

rain is fairly linear and spans eight chapters, which makes for a run time of roughly three hours. Once you finish it a set of 24 memories (three per chapter) become available to find. They help to fill in the story, and I enjoyed the game enough to be enticed into a second playthrough, but even with that this is not a lengthy title.

With a short run time and minimal challenge, rain’s appeal lies in its ability to create a world that elicits both interest and emotion. If you can get on board with that, rain is something you should absolutely download. However, if you’re someone that believes a game must last X number of hours or present a specific challenge level to be worth your money, this may not be for you.