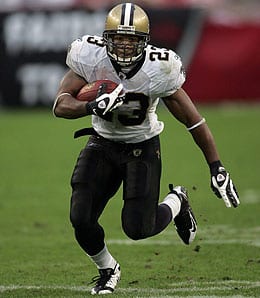 Don’t be shocked if Pierre Thomas is a Fantasy stud by season’s end.

The 2009 RotoRob NFL Draft Kit returns with another team preview (we’re on the home stretch now, with less than 10 NFC teams left to go). We’re going to try to shoot out all these team previews and then start releasing the kit’s other goodies (cheat sheets, sleepers/busts lists, etc.). While we’re wondering if Michael Vick will get a pardon from the NFL now that the feds are off his back, let’s preview the New Orleans Saints, who will look to build on last year and enjoy their first winning season since 2006.

The Saints boasted the NFL’s top-rated offense, averaging nearly 29 points and over 410 yards per game. The man at the helm of that well-oiled machine, quarterback Drew Brees, led all NFL passers with an absurd 5,069 yards through the air – the second-highest total in league history. Though the Saints’ running game was rather woeful, tailback Pierre Thomas showed definite signs that he may be a budding NFL star. Heretofore unknown Lance Moore stepped into wounded wideout Marques Colston’s ample shoes and produced three 100-plus yard receiving games – while scoring seven times.

Many things went wrong for the Saints in 2008 – most of which were prefaced by the offense leaving the field. The New Orleans defense was simply awful last season, and its ineptitude was a big reason why Brees was forced to chuck 635 passes – fifth most in league history. Another prime suspect for Brees’ aerial exploits was New Orleans’ running game (or lack thereof), which produced a meager 99 yards per game – good for 28th in the league. Oh, by the way, the team finished in the NFC South division basement with a record of 8-8.

The Saints tried to shore up their leaky secondary by signing free safety Darren Sharper to a free agent deal. The veteran has scored 10 defensive touchdowns in his career, and his presence is an immediate upgrade to the Saints’ big-play potential. Former Patriot fullback Heath Evans should be able to open a few more holes for the Saint runners this season, while cornerback Jabari Greer will provide depth in the beleaguered secondary. Departed Mike McKenzie is no longer a part of that motley crew, and the Saints also cut ties with their all-time leading rusher Deuce McAllister, who still might have a chance to land a part-time role somewhere in the league.

The Saints also addressed their defensive needs in the draft, snagging cornerback Malcolm Jenkins in the first round, and safety Chip Vaughn with their fourth rounder. Jenkins is a versatile defender with good cover skills who may very well win a starting job in training camp. Vaughn, meanwhile, figures to play in situational packages only.

Brees put up career-best numbers last season, but his career year was far from a fluke — 2008 marked his third consecutive season with over 4,400 yards passing and fifth straight campaign with at least 24 touchdown passes. The 30-year-old gunslinger doesn’t take very many sacks, and he has shown the ability to play through pain when necessary. While the Saint running game may improve somewhat this season, their defense once again figures to be a lower echelon unit – meaning Brees will almost certainly be filling the air with footballs in ’09. He should have plenty of tasty targets to receive his aerial offerings, too – making Brees arguably the best Fantasy quarterback available come draft day.

With McAllister out of the picture, the door appears wide open for Pierre Thomas to become an NFL star and bona fide Fantasy football stud. The early numbers look good: Thomas racked up nine touchdown runs on just 129 carries last season, and averaged a hefty 4.8 yards per rushing attempt. He added three more touchdowns among his 31 pass receptions, so his nose for the goal line is undeniable. Thomas is a No. 2 Fantasy back with the upside to produce like a strong No. 1 by season’s end. The same can’t be said for Reggie Bush, who again missed significant time due to injuries in 2008. When he was on the field, Bush displayed the same inconsistency that has plagued his NFL career. He has definite value in point-per-reception formats, but Fantasy owners looking for big rushing numbers and double-digit touchdowns from the former USC stud are almost certainly in for another disappointment in 2009.

A thumb injury cost Colston five games last season, but once the big guy made it back onto the field, he showed why he is one of the league’s better wideouts. Over his last eight games, Colston averaged nearly 85 receiving yards per game and scored five times. He underwent off-season knee surgery, and he may be persona non grata in many Fantasy drafts as a result. Don’t let him fall past Round Four: Colston reports that he’s feeling great, and if he’s truly healthy another 1,200 yard, double-digit touchdown campaign could be in the works. While Colston was out last season, Lance Moore stepped up and became the waiver wire darling of many a Fantasy league. While his 79-928-10 line looks serviceable, remember that his numbers dropped dramatically once Colston was back in form – so Moore is clearly not the Saints’ top option. Neither is Devery Henderson, who blew a golden opportunity to show his stuff in Colston’s stead. It doesn’t look as though Henderson will ever be more than a deep threat who doesn’t catch enough passes or score enough to be Fantasy-relevant.

Considering the Saints’ lethargic running game, it’s hard to believe that Jeremy Shockey found a way to haul in 50 receptions without scoring a single touchdown last season. What’s not so difficult to fathom is that he once again failed to play in all 16 games – the seventh consecutive year he has pulled off that dubious feat. While Shockey’s brittle nature is troublesome, his recent lack of scoring acumen – he has found the coloured grass only three times since 2006 – is downright nauseating. J-Shock has the skills to turn things around in 2009, but anyone who drafts him needs to grab a viable backup to cover for Shockey’s inevitable DNPs.

Avert thy gaze Saint fans – your team’s D stunk like three-day-old sardines last season, finishing 27th in total defense, 17th against the run, 23rd versus the pass and tied for 23rd with a paltry 28 sacks. The Big Easy D wasn’t very good at getting the ball back for Brees and company, either – the Saints’ total of 22 turnovers forced was 20th in the league, and better than only seven other teams. Yuck…or as they might say in the French Quarter, yucque. The arrival of Sharper and a solid rookie season from Jenkins might infuse some life into the secondary, but it’s hard to imagine New Orleans finishing in the top half of NFL defenses this season.

With Thomas set to become the feature back, his days as a kickoff return man are almost certainly over, and there’s no clear successor at the moment. Bush could be one of the game’s most dangerous punt returners; three of his 20 runbacks last season went to the house. Unfortunately, Bush’s propensity for injury may convince the Saints not to risk him in the return game.

Place kicker Garrett Hartley didn’t miss a kick during his eight-game stint last season, and could become a major Fantasy sleeper if he keeps his job for 2009. The Saint offense figures to be among the league’s best this season, and Hartley could put up some monster numbers if that indeed comes to pass. Grab Hartley in your draft’s final rounds, and then get ready to laugh as you out-point the guy in your league that blew a seventh-round pick on a “stud kicker.”