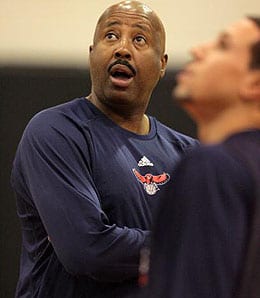 Things are looking up for Mike Woodson and his Atlanta Hawks this season.

I know this has been coming for a few years now, but is anyone else having a tough time adjusting to a world in which the Atlanta Hawks are a very good team? Case in point – this team was cruising through the 2008 portion of the schedule, with a 21-10 record as of New Years, but then they slumped, losing five of six, including four straight. Ahah! Here comes the great fold, right? Uh, maybe not. Atlanta has quickly turned things right around, taking three of its past four, including both ends of a back-to-back earlier this week.

Now the Hawks fly home for a two-game set with a very good opportunity to build on this roll. Friday, Milwaukee pays a visit, and while the Bucks have been decent lately, they are not exactly a powerhouse on the road. Sunday evening, the Hawks will host Phoenix, a decent road club, but one that isn’t exactly setting the world on fire in recent games.

It’s not too late for the Hawks to make a move on Southeast Division leading Orlando, but the way the Magic has been going, Atlanta will have to really turn it on over the final two and a half months of the season.

Improved defense has been the key as Atlanta has moved up the ranks this season, bridging the gap on the elite teams in the East. There’s been nothing wrong with the team’s O, but it has been D driving the improvement.

The Hawks have already had to deal with their share of injuries this season, and things aren’t currently easing on the health front. A concussion has kept Marvin Williams sidelined for the past couple of games and, considering he has yet to practice, there’s still no clear indication when he’ll be back. Al Horford (knee) will probably miss his seventh straight game Friday. Acie Law missed the last game with a bruised quad, and he remains day-to-day, although that shouldn’t have much of an effect on the team (other than the fact that starting PG Mike Bibby will see a few extra ticks of action).

Atlanta has had its way in its own building against Milwaukee, winning four straight (average margin of victory of 13.5 points), and considering the Bucks have only won nine of 26 on the road, I don’t expect a different result Friday. Atlanta is a superb 16-4 at home, having won seven of the past nine at Philips Arena, while Milwaukee has gone down in five of its last seven tries on the road.

The injury to Williams must be particularly frustrating to owners as it continues a disappointing season from the former Tar Heel standout. He got out of the gates strong this season, but has been sliding since, and his PT has slipped along with his play. We ranked Williams as the 35th best forward heading into the season and were calling for a season of growth from him. Well, it hasn’t happened, and he’s barely a top 50 forward now as a result. I’m encouraged by his slightly improved shooting this season, and there’s still plenty of time for him to bounce back, but concussions are tricky beasts, and that has to have you worried if you own him.

Law, by the way, has completely evaporated as a fantasy entity, having not played more than eight minutes in a game in the last two weeks. Before getting hurt, he was shooting the ball better, but with starter Bibby enjoying a great rebound year, Law’s PT has dropped so precipitously, that at this point, there’s no reason to mention him again. So I won’t.

Bibby, by the way, has provided great value for a guy you probably snagged with a seventh round pick. On Tuesday, he went off for a season-high 31 points with six assists, five steals and five treys. Sick! Bibby has really picked up his defense lately, recording 11 steals in the last three games. Holy Thievery Corporation, Batman. While he’s been the Hawks’ second-leading scorer this year (16.6 PPG), the best part of Bibby’s recovery for you playing in 9-cat leagues is his turnover rate. He’s never been better at protecting the pumpkin (1.5 TOs per game) than he’s done this season. All things considered, Bibby is almost all the way back to the level of play he showed in his glory seasons with the Kings. One concern: we did allude to the extra PT he’s seen with his backup out, but coach Mike Woodson is seriously riding his starting PG lately, with Bibby averaging 43.3 MPG in the past three, including 45 minutes on Tuesday. He’s played at least 40 minutes in half of his games this month. That worries me a bit, as while extra PT can be sweet, this is a bit much.

With Horford out, Zaza Pachulia has gotten a chance to start and he responded Tuesday with his best offensive output of the season – 18 points – and a block. As we projected, Pachulia has been the Hawks’ top big off the bench, but even when he’s starting, he doesn’t exactly rack up fantasy-worthy numbers, especially considering that he doesn’t block enough shots for a big man. He’s having a better season than last year, we’ll give him that, but Pachulia simply isn’t being aggressive on a consistent basis to get easy points at the line. If you’re desperate for help at centre, give him a look. But expect plenty of frustrating nights.

Look for Bibby to turn in another big night Friday against Milwaukee. Not only is he absolutely balling right now (20.5 PPG in his last six games), but he loves beating up on the Bucks, averaging over 19 PPG in his 17 career tilts against them.