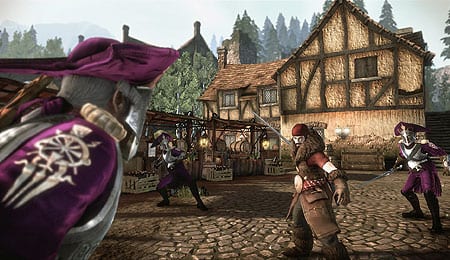 Even as King you can’t be afraid to get your hands dirty.

Fair or not, the Fable series is known as much for what it hasn’t delivered as what is has. Much of the reasoning behind that have been the boasts of Peter Molyneux, lead designer of the series, who has long delighted in making grandiose claims that ultimately didn’t pan out. Despite that, Fable remains one of Microsoft’s top exclusives, and the recently released Fable III looks to be the best one yet.

Like its predecessors, Fable III maps each of your offensive abilities (melee, magic and ranged) to the face buttons. Hold down a button and you’ll charge a more powerful strike. It’s basic but effective for the most part, though I don’t like performing the same action to block — holding down “X” — that I do to unleash my charged attacks, especially when the right trigger is unused during battles.

The right analog stick moves the camera around, which while common doesn’t feel quite right. It just seems a bit sluggish in combat when you’re usually squaring off against numerous foes and sometimes need to create some separation. Hitting the left bumper resets the camera behind you, though it’s hardly an organic controller motion to make on the fly.

Visually, Fable III looks like a polished version of Fable II with the same graphical style (read: extremely British) that has become synonymous with the game. Enemies look a bit more wicked and menacing this time around, and the new additions might rate as my favourites. Also new is a series of killing animations that will have your hero pulling off some sweet finishing maneuvers — my favourites include gunning down a bandit piece by piece after he flips you the bird and springing onto an enemy’s neck and then snapping it between your knees.

Those that played through the previous game might get a little added enjoyment out of seeing the progression of Albion as it moves into a more industrial age, though anyone should be able to appreciate the level of detail work that’s gone into crafting the various locations. Exploring the world of Fable III is one of the game’s most rewarding aspects, and a big reason for that is how cool and distinctive the various areas are. Mountains, lakes, forests and deserts cover just a fraction of what Lionhead Studios has created for you to investigate. It’s definitely impressive.

All that beautiful detail comes at a price, however, as Fable III is riddled with significant dips in the frame rate. Sometimes it makes sense (like when the screen fills with Hobbes or Hollow Men) while at other times it really doesn’t (climbing steps in a forest stronghold). You’ll also see some clipping and textures loading in slowly even when the game is installed on the hard drive.

The audio side is very strong, featuring a ton of excellent voice acting and a script that favours a more serious overtone. Yes, there’s still plenty of that distinctly English brand of humour worked into some of the dialogue, but overall this game offers some of the best vocal work experienced this year. As with the graphics there are a few hiccups, mostly when too many characters try to speak to you at once and the whole thing turns into a garbled mess. There are no such issues with the game’s score, which is consistently excellent from start to finish.

Fable III picks up roughly 50 years since the events of Fable II with your son, Logan, now wearing the crown. Logan’s reign is not a popular one as the King has seen fit to oppress the people with high taxes and a trail of broken promises to the surrounding towns. You play as the King’s brother (or sister), whose relatively carefree existence is shattered almost immediately when you’re recruited to start sowing the seeds of a much needed revolution.

What follows is one of the more interesting and well crafted story lines I’ve seen in recent memory. As in previous Fable games your deeds echo throughout the land, but this time the undercurrent of political machinations make for more interesting (and thought provoking) decisions than ever before. The game has effectively removed black and white resolutions on the macro scale, leaving you frequently to choose between two options that carry legitimate pros and cons. It’s truly refreshing to not have such obvious choices, and the delicate balancing act it creates begs for multiple playthroughs.

The first portion of the game follows your efforts to enlist enough allies to overthrow your brother, which is generally done by performing heroic deeds to prove your worthiness. At the end of each recruiting section loyalty will be offered in exchange for the assurance of certain concessions when you wrest control of the crown. By the time you’ve gathered a large enough force you’ll have made promises to a lot of different groups, which begs the question, will you keep them?

Answering that is what really sets Fable III apart from other games because your adventure does not end when you become King. Instead, you’re tasked with a whole new set of problems, and these issues turn out to be much less straightforward than amassing an army. Without giving anything away you’ll be asked to preside over several disputes and how you act will shape the future of Albion.

For example, you might be asked to choose between re-opening a factory using child labor and turning it into a school. On the surface there’s a pretty clear right and wrong answer. However, what Fable III does so well is muddy these issues. Yes, you promised to improve conditions for children and opening a school would clearly do that. On the other hand, the kingdom needs money to operate. Do you keep the factory open and risk angering the people so you can earn gold? Or do you spend much needed funds from the treasury to keep your promise, making people happy but putting financial strain on Albion?

There are numerous quandaries just as interesting that you’ll need to rule on, and perhaps the best part of all is that there is no magic bullet. Making everyone happy and providing the funding for the entire kingdom’s needs simply isn’t in the cards unless you’re willing to earn millions of gold yourself. As Shakespeare once opined, “Uneasy lies the head that wears a crown.”

Beyond the scope of the primary storyline you’ll also be presented with plenty of opportunities to take on side missions, which range from simplistic fetch quests to fairly involved journeys with multiple objectives. The primary rewards for completing these are guild seals, which serve as Fable III’s version of experience points. You’ll also earn them for building stronger relationships with villagers as well as defeating your enemies.

These seals are then used to unlock chests, which grant you new or improved abilities. The cheaper ones contain things like new expressions or the option to purchase real estate. More expensive goodies include adding new spells and making your ranged, melee or magic attacks more damaging. It’s an easy system to follow and is part of an overall effort to streamline the RPG process, thus making it more accessible.

Another part of that effort is the removal of the expression wheel used in Fable II. In its place you’re presented with two or three choices when talking with people — one friendly, one rude/evil and one that’s essentially neutral. The consequences from the actions are fine, but it’s pretty goofy to see the King of Albion tickling a male peasant or farting in the face of some hippie chick to make people react the way you want to. It feels out of place in game with such somber plotlines.

How you’re perceived by others has always been a huge part of Fable, and that’s no different here as villagers will sing your praises if they love you and shrink away if they’re afraid. What has changed a bit is that there seems to be much less of a focus on your outward appearance. Beards and hairstyles no longer award points for attractiveness or fear (at least not visibly) and I saw no fluctuation with my weight, either. Your character’s facial features don’t change much, either. Gone are the days of horns sprouting out of your head if you’ve done enough evil deeds.

Online multiplayer has been given an overhaul and is much improved over Fable II. No longer do you enter another gamer’s world as a nameless henchman confined to their screen. Instead you go as you and can do things like establish business partnerships, trade items, get married and even have children with a friend over Xbox Live.

Ultimately, Fable III is a game about choice. You can be good, evil or toe the neutral path. You can spend your days ridding the world of Hobbes and Balverines or impregnating your wife and raising a family. Be a pie maker, a real estate mogul or a slum lord. It’s entirely up to you.

Deep yet still accessible, Fable III aimed for broader appeal and generally hit its mark. Some will no doubt be disappointed that traditional RPG elements like item menus have been omitted, but the game doesn’t suffer for lack of it. Embrace Fable III for what it is — a fun action RPG with a sweeping narrative that’s occasionally undermined by technical issues and a sophomoric sense of humour.