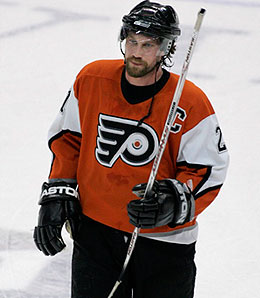 Nashville gave up a king’s ransom for him, but by bagging Peter Forsberg, the rich definitely got richer.

Transactions are the name of the game this week as we head into the NHL trade deadline. The biggest news, of course, is Nashville getting Peter Forsberg for two draft picks, Scottie Upshall and Ryan Parent. Let’s examine the fantasy ramifications of this move.

First off, Forsberg goes to a Nashville team that is loaded with talent. He’s more talented (and injury prone) than Jason Arnott but there is no real de facto No. 1 center; in fact, you can say that nothing’s set in stone since coach Barry Trotz says that he’s not committing Forsberg to any line right now because he wants to see what works best. What this means from a general fantasy perspective is that the Predators will probably use two equally strong power plays. When times get tough, there might be one super unit with Forsberg, Paul Kariya, Steve Sullivan, Kimmo Timmonen and Arnott together.

Nashville’s forwards were already having a solid season collectively; getting Forsberg will just mean that whatever wing he gets paired with will only get better since Forsberg is such a talented playmaker. And since nothing’s set in stone yet, you can expect a few different experiments from Trotz until Forsberg’s linemates are set. Nashville’s power play has been surprisingly middle of the road — an off season from Marek Zidlicky doesn’t help — but look for Forsberg’s passing skills to boost those numbers, providing a statistical jolt to the Preds’ blueliners.

On the Philadelphia side, although he looked good against the Leafs on Thursday, Simon Gagne’s production will go down, simple as that. Upshall will get a chance to crack the lineup, but he won’t really have a significant impact one way or the other. Parent is still a little ways from the NHL and won’t have any fantasy impact.

Two other major transactions this week — Ladislav Nagy goes to the Stars while Brad Stuart and Wayne Primeau get swapped with Chuck Kobasew and Andrew Ference. Besides the fact that the Joe Thornton deal looks even worse now for Bruins fans, here’s the fallout:

Nagy’s got a chance to play with Mike Modano, however, he’s a complimentary player and doesn’t have the will to transform a team that can struggle for offense at times. Nagy’s moodiness and work ethic have been problems in the past; getting traded could either ignite him or cause him to fall off the planet. I’m guessing the former, most likely because he’s playing for next season’s big paycheck as well. From the Coyotes side, it’s time to begin the firesale. Shane Doan is staying, but the already moribund Phoenix offense will be lacking even more.

Stuart has averaged about 20 minutes per game so far for Calgary. However, he’s stuck behind Dion Phaneuf and Robyn Regehr on the depth chart, and will probably be rotated in and out of the power play depending on how things are going. So far, Stuart has no points, is a -1, and has three total shots for Calgary.

In other news, it sounds like Todd Bertuzzi may actually make it back into the lineup before the trade deadline, which means he might soon be producing…for another team.

We’ll see how deep the Bruins firesale goes — it makes sense that Marco Sturm will go. Glen Murray may also go, even though he’s battling a nagging injury right now.

An off night for Sidney Crosby is getting one point. Crosby’s points-per-game rate seems to be increasing as he gets closer to the century mark, and he’s got 14 points in his last seven games.

On the other hand, Alexander Ovechkin, despite his pretty funny new commercial, is in a bit of a slump with just two points in his past seven games. Not coincidentally, the Capitals have lost five of those games.

A minor transaction might make for an interesting sleeper pick. The Sharks reacquired Alexander Korolyuk, who has been playing at roughly a point-per-game pace in Russia for the past few seasons. Korolyuk has dynamic speed, shifty hands, and a great shot. He can play anywhere from the third line to the top line, but don’t be surprised if he gets an extended tryout with fellow speedsters Patrick Marleau and Milan Michalek.

Who needs Marty Turco? Dallas’ Mike Smith has had a great save percentage in his four February matches while splitting the recent duties with Turco. If Dallas keeps giving both goalies a chance to play (while resting Turco for the stretch run), Smith may be a good depth fantasy pickup.

Let’s hit the ice for another round of Ice Chips! The sound you hear across North America is the steam flying out of Ed Snider’s ears as the Flyers continue to implode. Snider has threatened major changes. What does that mean? Peter Forsberg, Simon Gagne, Jeff Carter and Mike Richards are safe. Everyone else, except […]