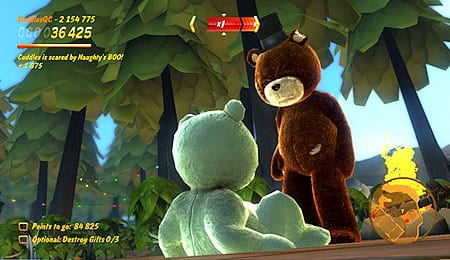 Who gives a bear a top hat but skimps on the monocle? Seriously!??

Conceptually, Naughty Bear was made for people like me. It’s got a dark, morbid sense of humour and consistently aims to shock by combining adorable fluffy teddy bears with gruesome violence. Despite a deliciously sadistic hook, the game stumbles and ultimately comes up short of its potential thanks to some shoddy controls and repetitive gameplay.

For a game with such a basic premise — scare and/or kill teddy bears — there’s a lot of controls to familiarize yourself with. Unfortunately, nothing at your disposal allows for locking onto targets, which leaves you to flail away with melee weapons while trying to keep the camera in position to follow the action. It’s an exercise in futility and zaps some of the potential fun.

Too often the other bears will change direction, leaving you to spin the camera feverishly to relocate them, and it makes some of the more elaborate environmental kills not worth the effort. It also deteriorates the game into button mashing and leaves you open to counter attacks, particularly if your enemies are armed with guns.

Although Naughty Bear takes place on Perfection Island, the graphics are far from perfect. There’s minimal variety in the environments from one level to the next and you’ll see the same killing and scaring animations recycled over and over again. There are also moments transitioning from one area to another that the game will slow down and get extremely choppy. The island’s inhabitants are at least cutesy in a Happy Tree Friends sort of way, and the “Ultra Kill” animations, while short on variety, are pretty creative and fun to watch.

The audio is as forgettable as the graphics, featuring an announcer that talks a lot without saying anything of value. They clearly went for the “official sounding voice says ridiculous things” routine we’ve all heard before but they fail to hit the mark. His voice isn’t quite “stuffy Brit” enough, and his puns aren’t funny (perhaps deliberately so). The bears have mumbling, high-pitched voices that become grating fairly quickly, though it adds to the satisfaction when you dispatch them.

The main story is that you, Naughty, are an outcast amongst your peers. An ongoing birthday party, to which you did not receive an invitation, serves as the final straw as you decide that you’re not only going to crash the party but kill the birthday bear (and several others) for this slight. That’s the first of seven episodes, all of which revolve around the other bears looking to eliminate you with a secondary story element — alien invasion, drilling for oil, the undead — serving as the backdrop.

Within each of these seven episodes are four sub-levels that require a more specific approach. For instance, one sub-level will ask you to avoid being hit while another necessitates that you finish before the time limit runs out. It’s a decent way to squeeze more variety out of the recycled environments, but even with that things become repetitive over the course of 35 missions.

That’s largely because no matter what limitations or stipulations are placed on you at the beginning of a level your ultimate goal remains constant: score as many points as possible. Naughty Bear gives you points for just about any anti-social behaviour from popping balloons to driving a fellow stuffed bear to commit suicide. The faster you string them together the higher your multiplier gets, which makes your best course of action to move quickly while prolonging the other bears’ suffering.

Therein is the game’s most enjoyable feature, as you truly become a maestro of misery the more time you invest. While early on you may be content to hack your furry nemeses to death, future romps will have you sabotaging a grill, scaring the shit out of the bear and then killing him by slamming his head into the car door of the very vehicle he was trying to escape in. When it works, Naughty Bear can be sadistically satisfying.

Scoring points earns you Naughty Cups, which is what you’ll need to advance in the game. Each primary and secondary episode requires a set number of bronze, silver, gold or platinum cups to unlock. That means you’ll be playing through levels multiple times just to advance, which artificially extends the time investment required substantially. However, the presence of some frustrating criteria — such as not allowing any bears to escape — and continual issues with the game freezing during episodes result in far too many “lost” hours where a great run goes up in smoke because you missed a warning or, worse yet, the game stopped responding altogether.

For those persistent enough to grind through the levels, you’ll unlock various costumes that modify Naughty’s base statistics in areas like health and accuracy. The game also has a strong lineup of achievements/trophies with secondary goals to shoot for, such as specific environmental kills for the featured enemy bear in each level or things like making all of one bear’s guards kill themselves. They’re well thought out and give Gamerscore hunters something else to strive for.

An online multiplayer is available, but it doesn’t seem like many people are playing it. I managed to find a handful of two- and three-person affairs (it accommodates up to four) yet still never saw the end of a match due to disconnects.

Naughty Bear has its moments, but it never lives up to what it could’ve been. There are too many issues with the repetitive gameplay and technical flaws to recommend it as a full-priced release. Once it hits bargain bins it could attract a following thanks to its perverse subject matter and barbaric charm.