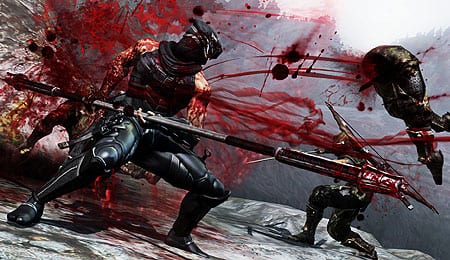 Let’s hope that was the guy that created the enemies with rocket launchers.

Every now and then, Team Ninja gets sick of repackaging the original Ninja Gaiden onto another system and instead opts to give us a new entry in the series. Its propensity to re-release titles has spread to the sequels, however, as Ninja Gaiden 2 recently graced the Vita while Ninja Gaiden 3 is being re-released on the Wii U (as well as systems people actually own) with Razor’s Edge.

It made me wonder if some people from Capcom kidnapped and impersonated the higher ups at Team Ninja to help spread their business practices until I realized these guys turned Samus Aran into a whiny little girl that cowers at the sight of Ridley, so they’re just as capable of dipping into Capcom’s bag of tricks. So, can the upgrades and extra features included in this Street Fighter style re-release save this game?

The controls for Ninja Gaiden games have always handled very smoothly, and this entry is no different. Slicing through enemies and pulling off combos felt very polished at a smooth 60 frames per second. The camera, however, is a different story, as it took a pretty big drop in quality from the first Ninja Gaiden to the second with this newest entry continuing the tradition. The camera was not always a problem, but when it was it could make the game borderline unplayable.

Actions outside of combat presented even more issues. Quick time events, which do not tell you which button to press (I still have no clue what to press when rockets come after me in mid-air), stealth sections with wonky controls and awkwardly climbing up walls combine to make the shorter, non-combat sections a chore. Also, if you are one of those people amused or disturbed by Team Ninja jiggle physics, the PS3 version lets you control them with Six-Axis motion controls, so buy accordingly.

If there is one thing the game does right, it is looking and sounding great. Razor’s Edge runs smoothly and looks sharp with wonderful gore effects. It puts these to liberal use as well, as this is one incredibly violent game. The environments looked polished, but they were very generic with nothing in particular standing out. The sound effects went perfectly hand-in-hand with the gore, and the music, while forgettable, got the job done well.

Compared to past Ninja Gaiden titles, the story takes a serious turn and plays a more prominent role. Still, even if you forget that this series takes place in the same universe as Dead or Alive, the story is neither interesting nor well told. It tries to bring how many enemies Ryu has tragically killed to light, but when he is still gutting dozens of enemies in under a minute, it is pretty clear at how little the developers thought it through.

Perhaps the most surprising thing about Ninja Gaiden 3: Razor’s Edge was that its upgrades were not simply new characters and weapons, but also real improvements to the combat. I say surprising because there is still so much wrong with this game that the very idea its mechanics were worse is unbelievable. I am not sure whether I prefer when I thought it was them being lazy or viewing this is a serious effort to improve the game, which fails both as a Ninja Gaiden sequel and a standalone action game.

The term “dumbed down” is thrown out a lot, but it describes how Ninja Gaiden 3’s combat has changed perfectly. Combos, which previously had their own distinct effect and purpose, now merely give different animations with largely the same outcome. With fewer alternate weapons than 2, this made combat much less exciting and quicker to grow stale. The other three available characters fared better as they had much more variety in their combos, which made the game more fun, but it’s still littered with other problems.

An upgrade system is also introduced, which excited me at first until I saw the true effects. It only exists to unlock moves, such as jumping on enemy heads — moves that Ryu previously had the ability to do from the beginning. The new abilities meanwhile bring very little to the table, delivering absolutely zero excitement on that front.

To compensate, I tried to like this game as a button-mashing hack ‘n’ slash instead of a Ninja Gaiden title. Even with that mentality, however, the enemy placement was an absolute joke whose only purpose was to make the combat as painful as possible. It all boiled down to if I was not in a pre-rendered finishing move against an enemy, I was vulnerable to a number of cheap shots.

Enemies would grab me mid-combo to take a chunk of my health away. Enemies that could only be killed by aiming the bow and arrow would fire rockets every three seconds, and many, many more annoyances were always present to keep me from enjoying the combat. It was a game that provided challenge in very cheap ways, and adapting only served to make it less fun.

After playing Ninja Gaiden 3: Razor’s Edge, I realize that Metroid: Other M may have actually been a ploy to soften any blows Team Ninja received after Tomonobu Itagaki left. After it pissed so many gamers off by ruining Metroid, it seems like the developer ruining its flagship series pales in comparison. Even with some improvements I cannot recommend Razor’s Edge in a year when God of War: Ascension, Metal Gear Rising: Revengence and Devil May Cry were all released. Any one of those games makes for a more satisfying purchase.