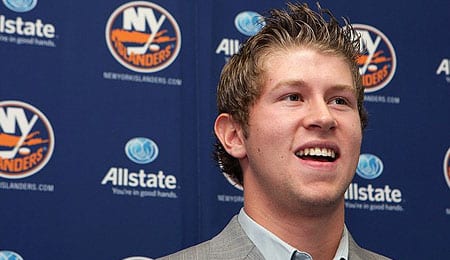 Josh Bailey has been playing out of his mind lately.

Welcome to April, ladies and gentlemen. We hate to be the bearers of bad news but Sunday is also April Fools’ Day. There will be many pranks, tweets, and status updates that are simply just not true. Here at The Wire Troll, there will be no such promises. It is the last week of the Fantasy hockey season and yes there will be playoff pools, but let’s see where that goes first.

Add the injuries to the mix for this season and what you have is a volatile situation that has driven owners to the edge. Six months ago, journeys began and now it all comes to an end just as everything really does in time. And at this crucial stage, it is just about time for one last kick at the can.

We’ve added a new feature to the Troll: our “hot risers” of the week. It definitely can be tough to negotiate the last week of your Fantasy hockey year. The finish line is almost here and for some has finally come.. Let’s see if these picks will help you get to your appointed goals.

Josh Bailey, C, New York Islanders: No one is sure what to think about Bailey’s surge, but the thing is early mock draft boards for 2012-13 are buzzing about his potential. Granted, he did not have a point Saturday against Boston, but his 12 points in six games stretch garnered some serious notice in the community. This is a forward who is not even close to 23 yet and his ATOI was up quite a bit in March. Bailey’s chemistry with Franz Nielsen is interesting to note and could prove very useful for next season. There is no reason not to expect a few more points in from Bailey in this final week. The ownership percentage point rise is only 4.1, but will climb in the next few days to double digits.

Zach Bogosian, D, Winnipeg Jets: Bogosian frustrated so many in the second half because the offensive potential was there along with the defensive components. The problem was he could not stay healthy at all. However, in the last week Bogosian put together a few nice efforts, including a 10-shot game and four assists in four games. The hits and blocks have been pretty nice of late also. Monitor his production this week and consider him a bit of a riser even for your drafts next season. Winnipeg has a brighter future than some would think.

Brian Rolston, LW, Boston Bruins: Rolston’s production may have eased but then again it may have not. His 23.6 ownership percentage point rise is not that much of an accident. However, Rolston owners should expect less ATOI than the previous two weeks. That actually may be beneficial because Rolston is no spring chicken and a bit of rest here and there could lead to a couple points this week and more shots on net. At the very least, the old man is worth a look if you are desperate enough in this final stretch.

Kyle Okposo, RW, New York Islanders: It seems Islander players are surging offensively in the last week but maybe that’s because they have nothing but pride to play for or that they played the Pittsburgh Penguins. Maybe it is a bit of both but Okposo does have goals in five straight games now. When looking at leagues that weigh goals a little more, Okposo has to be given a shot at the very minimum. Maybe it just took a little longer this season for him to get going (too late for many, however).

Matt Cooke, LW, Pittsburgh Penguins: Why? That is the first question we will probably get here. It is crazy, but Cooke has been one of the hotter players in the league in his last 10-to-15 games. He may only see 14 or 15 minute of ice time and fire two shots on net per game, but his increased discipline has helped him have a shot at a 40-point season. Did you expect a 20-20 season from Cooke? Let’s be honest and just say that certainly no one ever did. The Sunday game against Philadelphia could be a nice springboard and test as playoff hockey nears.

Frans Nielsen, C, New York Islanders: Here we go again as the line combinations play a key. The Isles’ second line has been better than most first lines in the last couple weeks. Honestly, it is a trend that could very well continue as teams continue to focus on the John Tavares trio. The frustrating agony is this: We were supposed to see this second line perform all season and all we got was a quarter season at best. Maybe next season will bring the big breakout, but for this week, make the move and Nielsen.

Nikita Nikitin, D, Columbus Blue Jackets: Nikitin may be a 45-to-50 point player next season and few will even notice in Fantasy drafts. As it is, this season he is over the 30-point mark. The nine points in his last eight games are not an accident and although Nikitin’s ATOI has been a bit erratic with times ranging from 19 to nearly 29 minutes, we feel he is getting closer to making that next Fantasy step. Wouldn’t you want to get in on this while the value is not quite as high? You bet! So what are you waiting for?

Willie Mitchell, D, Los Angeles Kings: Single digit percentage owned players are often that for a reason but hey, why not at least try to take a shot here if you’re desperate enough for ATOI, hits, and blocks? Now is Mitchell going to get you two or three points a week every week? The answer is no but just the fact that he can get a few shots on goal, an assist or two, and provide a decent +/- option is at least worth a very deep flier in the most dire of situations given the current injury environment. The reality is you could do much worse.

Allen York, G, Columbus Blue Jackets: We save maybe the darkest horse for last here in The Wire Troll. York likely will never be confused with an NHL caliber goalie, but for this week he may be just right as Columbus continue to play out the string and for jobs. Pride is a very strange thing and maybe Columbus at least goes out on a better note than it came in on this season. At the very least, the Blue Jackets have learned something. If there are no other options out there then take a ride for the extra cheddar and go out swinging like the old Mike Tyson.

Well, that is it for this week. See you on the other side with a season ending edition of The Wire Troll.