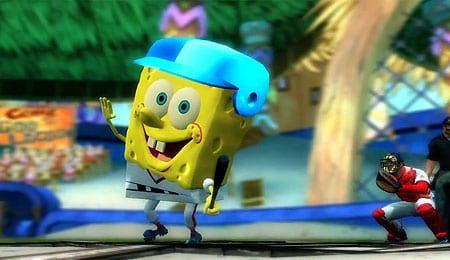 These crossovers are getting out of hand! Marvel vs. Capcom? DC vs. Mortal Kombat? Mario vs. Sonic Olympics? What next? Nickelodeon cartoons versus professional baseball players? Well, yes, actually. And, no, I’m not making this up. The 2K Play team out-gonzos everybody by presenting one of the strangest mixups in recent memory with Nicktoons MLB available for Xbox 360. It’s Nicktoons All-Stars against MLB All-Stars in a game of power-charged baseball, or as Invader Zim’s Gir likes to call it, the “national past your bedtime.”

To keep the game fitting with its core audience of younger players, 2K Play decided to make fast-paced arcade-style controls very similar to The Bigs. When up to bat, players standard swing with “A,” power swing with “B,” and bunt with “X.” After a hit, runners automatically make the sprint to first, but if the hit is deep enough, pressing “A” will turn control over to the player to run to further bases. Tapping “Y” will give base runners a lead and a second tap will make the steal attempt while the next batter is up.

When your team takes the field, different pitches are clearly mapped to each face button. Holding the button of your choice charges a meter while you aim with the left stick — when the meter hits its peak, release the button and the pitch is made. Hitting the meter’s peak successfully results in an accurate fast pitch that’s hard to nail. If the batter hits the pitch, left trigger will swap control over to the fielder closest to the ball and “A” will make a jump or dive for air balls. Once the ball is snagged, the layout of the face buttons correspond to each base you want to throw to. Whether in the field or at bat, pressing right trigger activates a fast and powerful version of your pitches, swings, and field movement for a touch of over-the-top action.

Only a touch, though. I’m surprised of how straightforward of a baseball game this is for a title featuring such a zany mix of characters. Still, much like The Bigs, the controls are fast, easy to learn, and lots of fun. Nicktoons MLB also boasts Kinect controls where matching hand gestures and arm swings determine pitch style and batting strength. Unfortunately, I wasn’t able to give these features a try, but it’s worth noting this is the first MLB title with full Kinect support.

Mixing 3D renderings of Nicktoon favourites with realistic renditions of MLB players is an odd choice for graphic design. Perhaps creating cartoony versions of players from all 30 MLB teams would be a daunting task, so instead, several elements from The Bigs, such as dynamic camera angles and HUD, are reused here. The toons are rendered nicely as well as their themed stadiums, but their animation is somewhat lacking. Aside from their intros and celebratory moves, the majority of the players have the same base animations throughout.

The game heavily relies on the original voice talents from the shows to bring the characters to life. The real unseen star of the show is Gir from Invader Zim as he provides tons of side-commentary that is utterly ridiculous. Quick quips from the whole cast of toons are aplenty, but never to the point of inducing nausea. Unless you detest hyper and idiosyncratic shows like Ren & Stimpy and Spongebob Squarepants, the game is sure to make you crack a smile at least once or twice.

With over 20 characters from popular shows such as Avatar: The Last Airbender and Planet Sheen, Nicktoons MLB offers accessible ballpark gaming aimed at a younger crowd. That’s not to say grown-ups can’t appreciate Nicktoons or this game for that matter. But it’s worth noting the extreme and bizarre antics of some of these shows are dialed down greatly in this title for the kiddies. Parents don’t have to worry about disturbing elements such as detailed close ups of pimply butt cracks and characters turning into sausages trying to eat each other. (Obviously, I’ve seen a Nickelodeon show or two.)

The gameplay of every selectable team member plays exactly the same and only differ from each other in stats. Players can mix and match real players with toons in a customizable roster in Single Game and Tournament modes. You can also go straight MLB vs. Nick in the single game Showdown mode. The only extra mode is Distance Derby where batters hit a flurry of pitches and aim for point targets out in the stands. It’s a nice touch but it’s rather limited. Aside from that, every match-up moves at a fast and exciting pace with solid gameplay living up to the 2K Sports standards.

Replay is encouraged via a virtual card collection, in which performing specific feats score a wide assortment of Nickelodeon character cards. Two players can team up or go head-to-head against each other in local multiplayer, but no online modes are available (perhaps to keep the kids safe from belligerent foul-mouthed sports fans).

As stated earlier, this is rather straightforward baseball. If I heard there was a game where Aang and Powdered Toast Man were teammates, I’d expect some extremely over-the-top power plays and outrageous humour. But, sadly, that is nowhere to be found. I think the opportunity to break boundaries and go all out would have been greater if this was a Nickelodeon-only game with no MLB attachment. This is a good playing ball game for sure, but the crossover doesn’t meet the high potential of craziness when compared to other nutty match-ups.

Nicktoons MLB for Xbox 360 is a solid baseball title that lacks extra features and modes but has a lower price of US$39.99 and full Kinect support. Serious Nicktoon fans may geek out a little, but real baseball fans might be taking a small step back if they’ve already enjoyed more traditional MLB titles. Perhaps tossing in the Nicktoons is a nice gateway to get their young ones to appreciate their favourite sport.