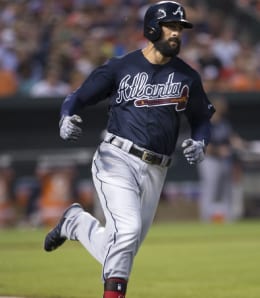 Even with the DH, PT may be hard to come by for Nick Markakis. (Keith Allison)

As you know, the 2020 MLB season is just around the corner, and before you know it, we’ll be kicking off our Wire Troll column with weekly Fantasy baseball waiver wire recommendations.

For now, though, we’ll begin to ramp up coverage for the upcoming season by looking at various players and their Fantasy prospects for 2020.

The inspiration for our latest player preview came when we were reading an article about the history of Portsmouth Post 23’s American Legion program, which produced among others, Al Oliver.

And in looking at his similarity scores on Baseball Reference, there are some damn good players he was aligned with, including Hall of Famers Zack Wheat, Joe Medwick, Roberto Clemente, Enos Slaughter and Kirby Puckett (at ages 34 and 35). Oliver’s by age comparisons included a very surprising result in Nick Markakis, as the two were closest in similarity at the age of 28.

We found it quite eye opening that seven years ago, Markakis was on track to have a career that compared to a near-Hall of Famer like Oliver. Then again, through his age 28 season, Markakis posted an OPS of 800 or more five times in seven seasons, just missing as a rookie (799). So he was pretty damned good. Of course, in the eight seasons since then, Markakis has topped an OPS of 800 just once (2018), while also finished below 700 once.

So it’s decidedly been a tale of two careers for the now 36-year-old Atlanta Braves outfielder (who at the very least can still mash it in the virtual world, as you can see in the video below).

Still, in looking at players Markakis compared most similarly with by age, it’s a real mixed bag. At age 23 and 24, he was closest to Matt Kemp (21.6 career WAR and still going). At age 25, things were less promising as Markakis aligned most with Ellis Valentine (17.1 WAR).

At 26, the closest player to Nick the Stick was Christian Yelich (31.8 WAR already), a comparison he’d gladly have kept for the duration of his career. But at age 27, and then again at 29 and 30, Markakis was closest to Gregg Jefferies (19.6 WAR), a decidedly less exciting prospect. As mentioned above, the age 28 comp was to Oliver (which was impressive, considering he accumulated 43.7 WAR).

At 31 and 32, things improved slightly as Markakis was most aligned with Melky Cabrera (20.6 and still going). For age 33, Markakis was most similar to Johnny Damon, who racked up a lofty 56.3 WAR), so things were looking up.

Finally, at the ages of 34 and 35, Markakis is most closely aligned with Buddy Bell, who we were surprised to see put together 66.3 WAR over his 18-year career.

For reference, Markakis enters 2020 with 34.2 WAR for his career. In summary, he’s had a pretty solid go of it. Certainly nowhere near Hall of Fame worthy, but damned fine nonetheless.

Now, what can we expect going forward?

Well, we already established in our Ender Inciarte season preview piece that Atlanta’s outfield is a very crowded place, and about to get even more so once Cristian Pache and/or Drew Waters arrive.

None of this is particularly good news for Markakis, barring a wave of injuries (which is definitely possible this season).

A career .288 hitter, Markakis’ extra-base power waned last year, and although he didn’t get caught stealing for the first time since his rookie season, that part of his game has become very limited since the early part of last decade. So without a ton of pop and next to no speed, he’s become a bit of a hollow BA type of player.

With an ADP of 369, Markakis is a real afterthought this season. The Braves actually declined their 2020 team option on him, yet opted to re-sign him anyway. We would have preferred Markakis landed on a team that would have afforded him more opportunity, but with the DH being employed in the NL this season, all is not lost.

He will likely remain on the strong side of a left field/DH platoon, but whether that translates into bigger numbers is another story (especially with Austin Riley looking like he’s ready for a bigger role). Markakis is what he is at this point: a league average outfielder, with no upside.

Obscure 1970s soul/funk band Aquarian Dream launched in 1976 and was only active until 1979. In 1978, it released its best album, Fantasy. From this effort came “Yesterday (Was So Nice Today),” a tune that was sampled by Mac Miller in his song “Therapy.”

Now it’s your turn. Let us know in the comments below what you think of Markakis’ Fantasy prospects for 2020.