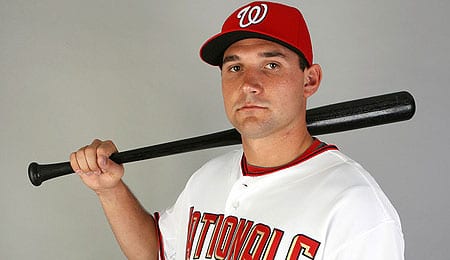 Ryan Zimmerman is delivering on the preseason hype.

Well, buckle up, kiddies, We’re headed for another wild ride this season.

As impossible as it sounds, there are arguably 11 of 13 non-division leaders still in the hunt for the Wild Card. Hell, even the 11th place team in the National League — the Washington Nationals — is only 7.5 games out of the Wild Card lead thanks to a current 5-1 run.

The Nats took three of four from a hot Marlins’ squad, winning Thursday in extra innings thanks to a Ryan Zimmerman single with two down in the 11th inning. This, after hitting a walk-off shot on Tuesday, and Zimmerman has now hit in nine straight, the final four of which are all multiple-hit efforts. The kid is starting to deliver on all the pre-season hype; he’s lifted his BA 20 points to .285 during the run, and is now slugging .480. He’s on pace to drive in 110 runs, and that’s nothing to sneeze at considering the third baseman is a tender 21 years of age.

Alfonso Soriano has been a Fantasy monster. He’s already reached the 20-20 mark, ranking fourth in the league in long balls (26) and fifth in steals (20). I guess he got over the whole left-field-is-for-losers thing. The question now is whether he’ll still be a National in a month. Much will depend on if the club can continue to shave the deficit. The odds are against it, but certainly stranger things have happened.

Jose Vidro is not hitting with much power, but with a .310 BA, it’s hard to complain.

Nick Johnson, healthy so far (knock on wood), is enjoying a breakthrough power year. He’s batting almost .300 and is on pace for 54 doubles and 25 home runs. The man is even swiping some bases, and should reach double digits in that category. Sweet.

Jose Guillen is ailing, but you’ve got to figure he’ll make some noise in the second half. And no, I don’t mean noise about his playing time. I mean with his bat. (Against a ball, that is, not someone’s head.)

Hitting is clearly not the problem. The pitching, however, has been suspect.

Mike Stanton has been ineffective as the left-handed set-up man. It looks like the wear and tear of years of abuse is finally catching up to Livan Hernandez. He’s been getting pounded at times, yet somehow has nine quality starts as well. Tony Armas, Jr. started the year well, but he’s been sidelined (what a surprise) and will need a big second half to help get this club back in it. Ramon Ortiz has been middling at best; he’s had a couple of decent outings in a row, but let’s see what he does against the Padres Friday.

Closer Chad Cordero is finally starting to look like the 2005 version of himself, which is a pretty darn good thing.

The club lacks a dominating presence on the mound. John Patterson is the closest thing they’ve got, but he simply hasn’t been healthy enough to contribute much this year. A huge — and injury-free — second half from him is mandatory.

Clearly, the Nats have a long ways to go. And without vastly improved efforts on the mound, it ain’t gunna happen, baby. They’re in tough this weekend, with the NL West-leading Padres visiting RFK for a three-game set.