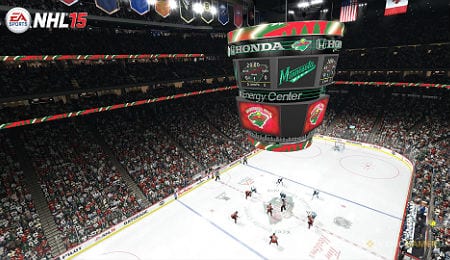 Fully realized arenas are the most lifelike seen in the series’ history.

Note: This review covers the new-gen version of NHL 15 for PS4/Xbox One. Many of the missing features on these platforms are still available for PS3/Xbox 360.

When EA Sports first released photos and gameplay videos of NHL 15, the hockey world got excited at the improved graphics, physics, and AI. But since the game’s release, hockey fans have been furious about the laundry list of missing features. Is the game worth your time given all of the furor and rancor? It depends on how you prefer to play your virtual hockey.

NHL 15 may have been rebuilt from the ground up, but much of it is familiar. You won’t find any quantum leaps forward like the introduction of the skill stick. In fact, there aren’t any tangible changes to the control scheme from the previous iteration. This isn’t necessarily a bad thing, though. The previous configuration worked wonderfully, and this at least wasn’t a step backward.

Hockey Ultimate Team and Be a GM are still largely menu driven, and if there’s one area that EA Sports consistently mucks up, it’s the user interface. Clunky and slow, the UI looks like it was built for tablets rather than consoles. It’s a relatively minor quibble but it does add to irritation when trying to do something simple like sort your roster.

Here’s where next-gen really kicks in. You may have not seen a sports game as visually impressive as NHL 15 before. Stadiums are now filled with lively 3D audiences, players have crossed that uncanny valley where they look better than mere computer generated models (though not quite lifelike, they’re on par with virtual McFarlane figures now). Animation is nuanced and accurate, and this is only enhanced by the superb lighting engine — even the arena jumbotron is subtly reflected on the ice surface.

Player faces are at once recognizable and a little off from their real world counterparts. However, this has to be expected to some degree until every NHL player sits down for a 3D scan of their head. Similarly, EA Sports still hasn’t perfected realistic jersey names/numbers in terms of bending and flow (though it is better than before).

On top of this sits NBC branded graphics and overlays. When used on replays, it looks remarkably like the real thing and plenty of passing eyes will easily mistake the game for a live broadcast. To go along with that, the lead NBC Sports announcing team with Mike “Doc” Emrick and Eddie Olczyk have taken over commentator duties, along with between-the-bench reports from Ray Ferraro. With tens of thousands of lines recorded in the game’s database, there’s plenty of prime material to create a varied audio experience. However, lines are often pulled out of context (e.g., the wrong time of the period) and Ferraro’s comments usually feel either generic or out of sync with the action.

If you’ve followed anything related to EA Sports over the past few weeks, then you know that NHL 15 comes with a Zamboni-sized controversy. In short, every mode has had something removed from it, and in many cases, popular features are removed completely.

But before we dive into that, let’s talk about the actual gameplay. This is, without a doubt, the best hockey simulation you’ve ever played. The improved animations aren’t just an aesthetic boost, they amplify the ragdoll physics engine for a more realistic sense of timing and collision. Puck physics have been improved for realistic spins, rolls, and bounces, which make for unpredictable circumstances during scrums (though it can still be a bit sticky on player sticks). AI has also improved away from the puck for both your team and the opposing team.

It’s a subtle difference, and casual players won’t necessarily pick up on it. However, long-time series players will definitely notice that things just seem a little tighter with NPC players making smarter decisions. For example, we had one play with an intentional puck dump into the corner. Our first forechecker went in hard to loosen the puck by checking the opposing defenseman while our other wing supported the puck along the board and we went to the slot. This is stuff they teach you in beginner hockey classes, yet it seems difficult to pull off in video games, and it was a refreshing a-ha moment about the possibilities of revamped AI.

So that’s the good stuff. It may seem strange to rip a game when the core gameplay is the best the series has ever seen, but game modes are just as important to a sports game in the modern era. And with NHL 15, a lot is missing, so much so that EA Sports had to do a bit of backpeddling and apologizing.

So what’s missing exactly? The list is so extensive that it’s easier to talk about what you can actually do. Offline play is broken down into quick game, Be a Pro, and Be a GM; in addition, offline playoff tournaments will be patched in. Be a Pro mode is missing the ability to sim to the next shift, which means that if you want 60 minutes of evenly distributed ice time, you’re going to need a lot of spare time. Coach feedback/goals are also missing, though some of that will be patched in.

Be a GM is the only real way to play seasons now, so sitting down, picking a team, and playing out the NHL season is impossible without creating a GM account. In addition, Be a GM doesn’t support a Fantasy draft, so you’re stuck with existing rosters. Hockey Ultimate Team is still around but it can’t be played offline.

One of the strangest omissions is Be a NHL/CHL/AHL Pro. From a technical perspective, this seems like it would be an easy thing to do, since it’s essentially taking the Be a Pro engine to use an existing player. So if you want to play multiple positions over seasons, it’ll have to be through self-created players.

Online play is extremely stripped down. EASHL — the hugely popular full-service competitive online league — is gone and EA Sports is non-committal about its return. GM Connected (online competitive GM play) is gone. Online modes include single games with single players, 5-on-5 online games (to be patched in post-launch), and Hockey Ultimate Team.

Ancillary management support, such as creating AI/plays, custom drafting, or editing players, is essentially gone. This affects both online and offline modes.

EA Sports has an official statement about what will be patched in, and support forum posts from developers indicate that there are a lot of things being considered but can’t be officially confirmed. In other words, if you’re hankering for EASHL or online GM Connected or one of the other missing modes, there’s no guarantee that you’ll get it in NHL 15.

NHL 15 is strange concoction. At its core, the gameplay and graphics are the strongest in the series. But the missing modes and features create a gaping hole in player expectations. If you’re primarily an offline player, NHL 15 has more of what you’d expect despite notable omissions. If EASHL and other online modes are your thing, then NHL 15 is nothing more than a tech demo. The only real silver lining about this is that the foundation is built for a ridiculously good NHL 16.